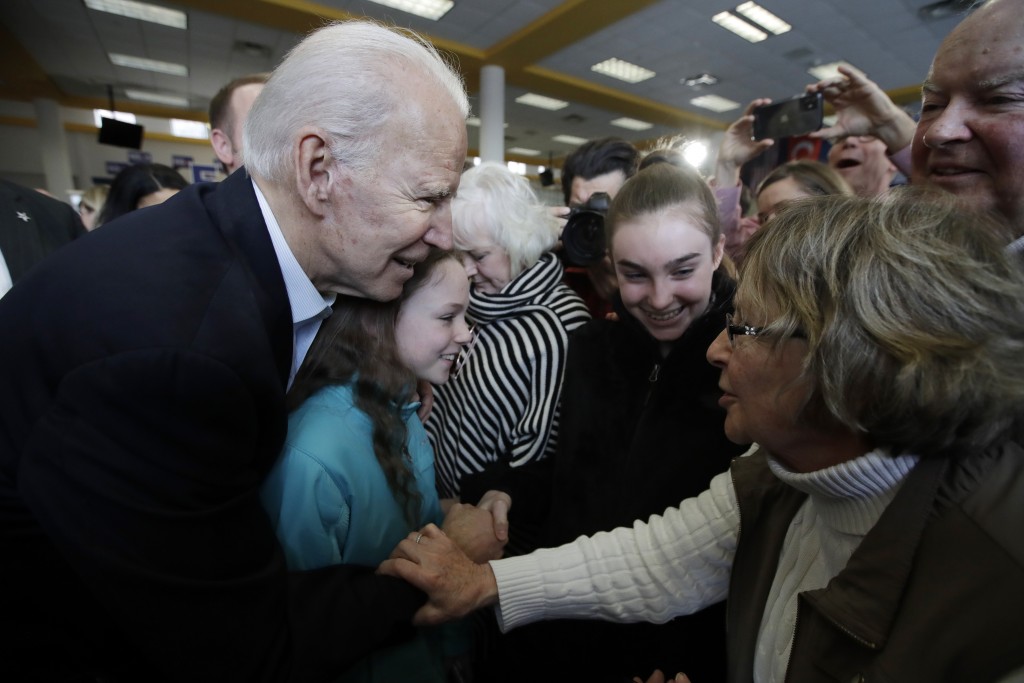 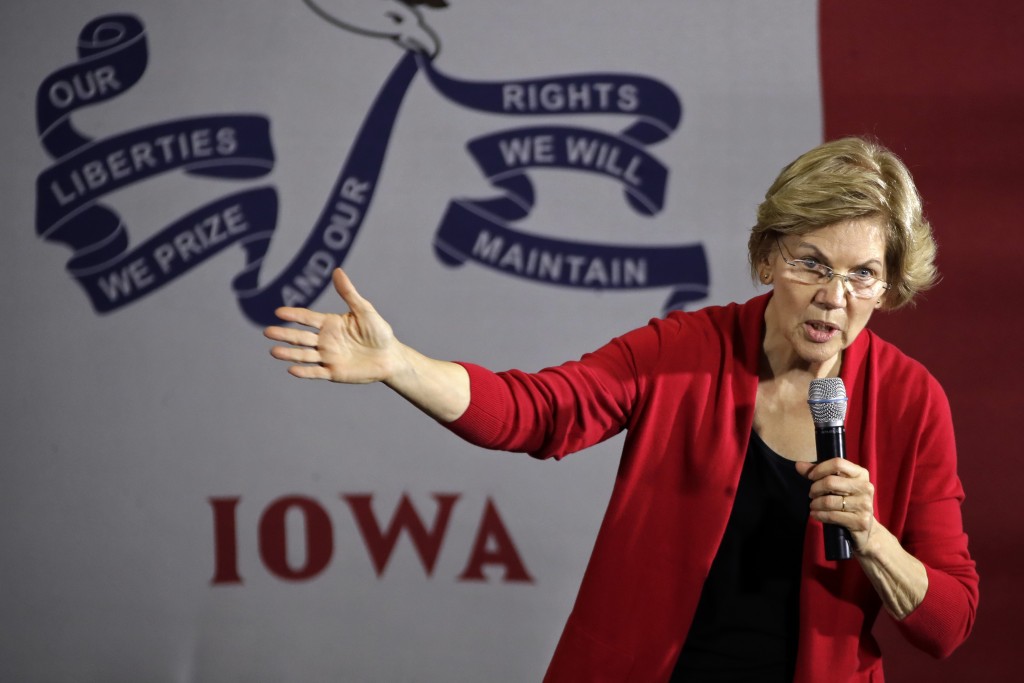 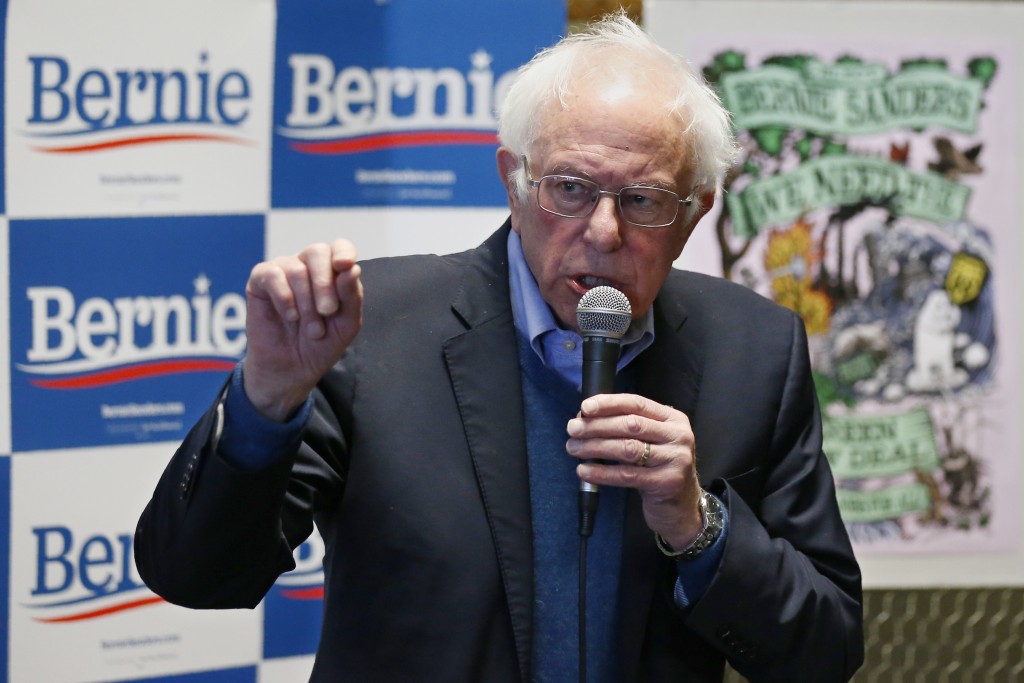 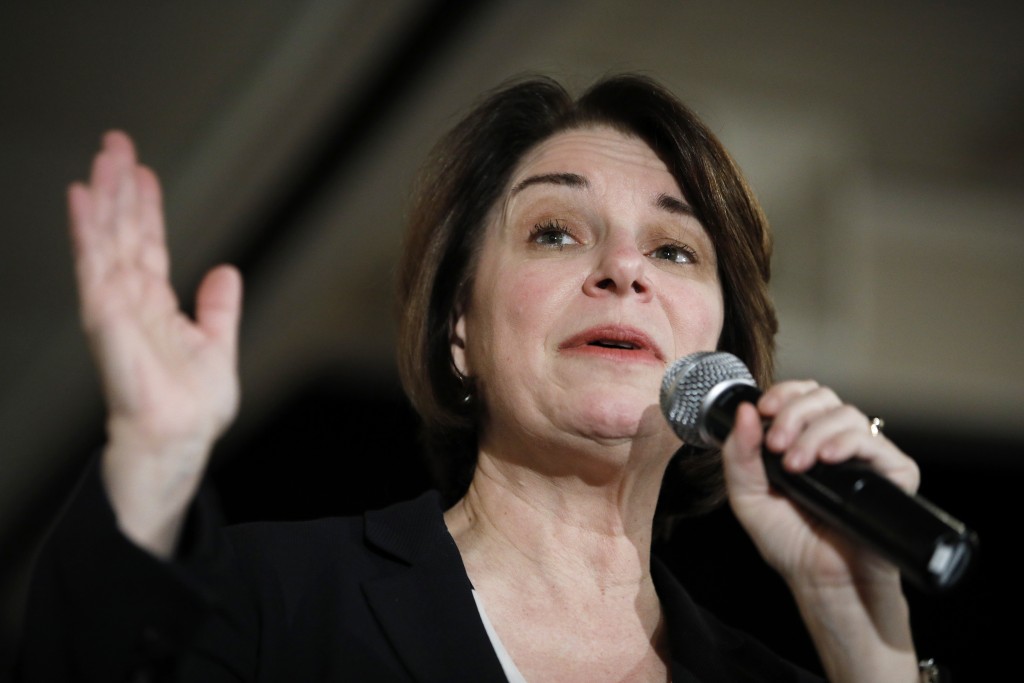 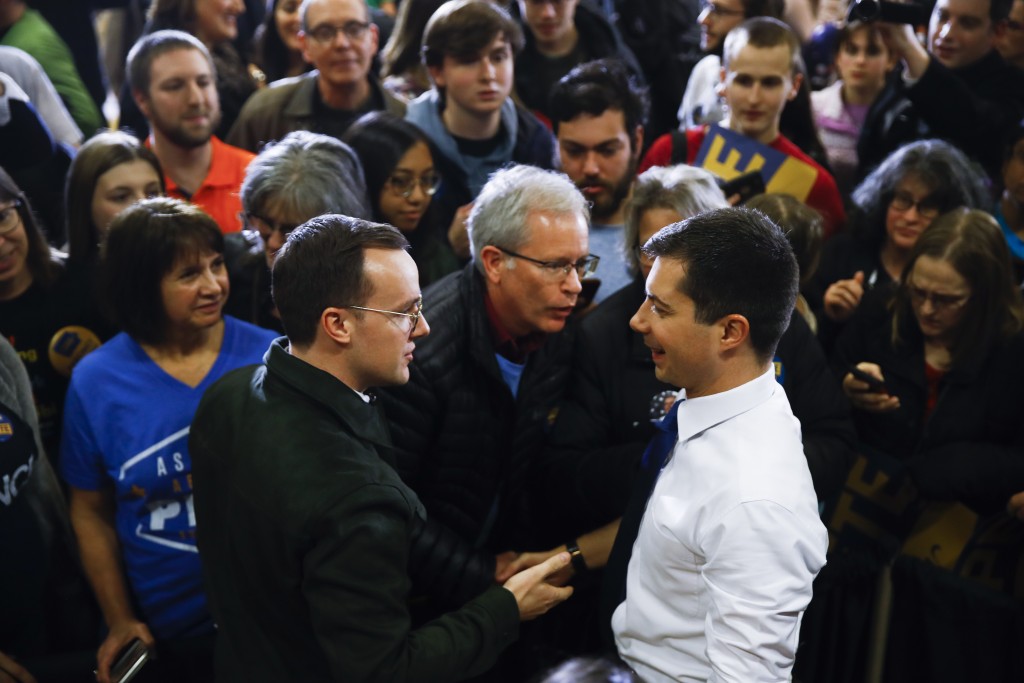 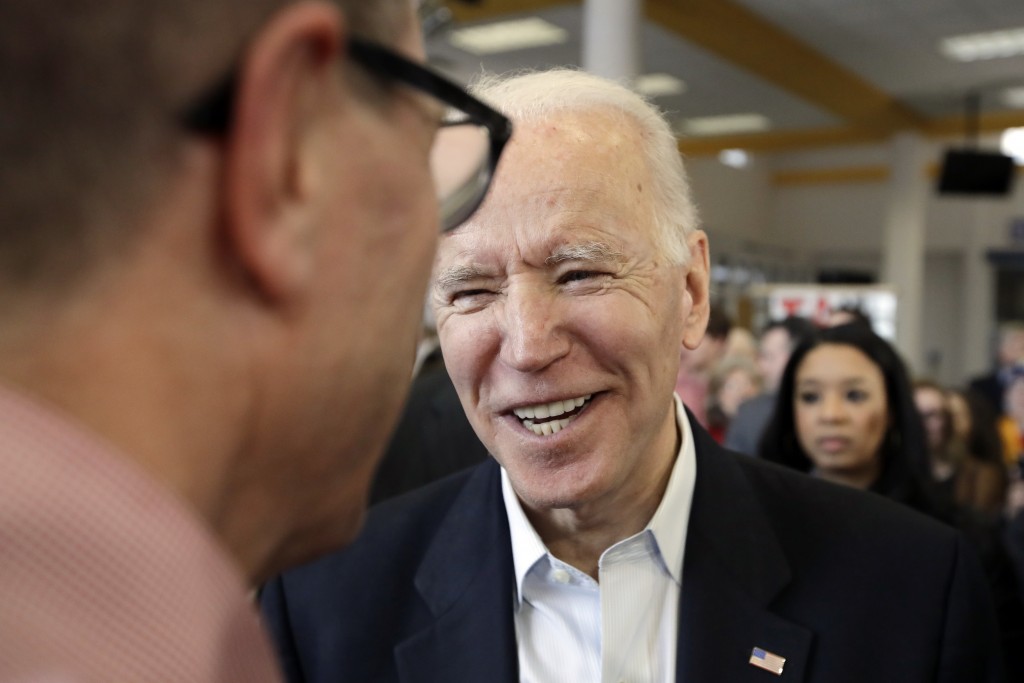 DES MOINES, Iowa (AP) — The Latest on the 2020 presidential campaign (all times local):

The Massachusetts senator told a voter in Indianola that her role model was either the Grammy Award-winning singer or Perkins, who served as Labor Secretary for nearly 12 years in the 1930s and 40s. Warren recounted Perkins’ fight for workers’ rights after witnessing the Triangle Shirtwaist Factory fire, a 1911 disaster that killed 148 people, noting that Perkins “led from the inside” as a New York City official, while public pressure on government helped pass reforms.

“The way we make government accountable is that you push from the outside, and I’ll lead from the inside,” she said.

Warren mentioned Perkins multiple times to the crowd as a sort of model for her views on creating structural change in government. She spoke to a crowd of about 300 in a college auditorium in Indianola, Iowa — after addressing an overflow crowd of hundreds more outside the venue. The campaign said Warren turned out 1,200 supporters to the town on Sunday morning.

On the eve of the Iowa caucuses, Joe Biden still isn't mentioning his rivals by name.

But the 77-year-old former vice president is answering calls from 38-year-old Pete Buttigieg for a new generation of leadership.

Biden says “there’s going to be no time for on-the-job training.” He says he's offers experience and judgment.

Biden says the next president won't have time to build relationships abroad, "the good guys or the bad guys." He says he can immediately "reestablish our alliances that are being crushed right now, both in Europe and in Asia."

Biden has tried for months to make his foreign policy credentials a major factor in a Democratic primary otherwise dominated by debates over domestic policies including health care, taxes and college costs.

Democratic presidential candidate Amy Klobuchar is trying to appeal to Iowa caucusgoers by asking them to think about the voters who won’t be at Monday night's caucus.

The Minnesota senator tells a crowd in Cedar Rapids to think about moderate Republican voters who swung from Barack Obama to Donald Trump in 2016, and those voters who stayed home in 2016.

She says those voters are “watching all of this right now. Especially in this state you understand how critical they are in the general election.”

She says Democrats "need a candidate who is going to bring them with us instead of shutting them out.”

Klobuchar isn't saying which Democrat she thinks is shutting out those voters, but she argues that she could win not just the White House, but also the Senate by delivering Democrats Senate seats in Republican-leaning states.

Democratic presidential candidate Andrew Yang is predicting that he will do unexpectedly well in the Iowa caucuses on Monday even though his campaign has largely flown under the radar.

He tells supporters in Ames, Iowa, that "the revolution will not be televised.”

He says, “If they did Mike Bloomberg would be our next president.” That's a reference to the more than $200 million that the former New York City mayor's campaign has spent on TV advertising.

Yang jumped off the chair after a brief speech and said, “let’s see Bernie do that.” It's a dig at rival Bernie Sanders, who's 78 years old.

Teague tells more than 500 people in a school gym in the Iowa City area that he was “on the Cory Booker campaign, but my second choice has always been Mayor Pete, and today I am endorsing Mayor Pete.”

Teague says the former mayor of South Bend, Indiana, "is a man who can relate to everybody.”

Buttigieg, who is openly gay, has faced skepticism for his low support among African American voters nationally. He has worked to reach out to influential African American leaders in Iowa. He won the endorsement last month of Quentin Hart, the mayor of Waterloo, Iowa’s most racially diverse city.

Bernie Sanders spoke to several hundred supporters and volunteers in a parking lot behind his field office in Cedar Rapids, Iowa, after too many people showed up to fit inside.

The Democratic presidential candidate promised "fundamental reform to American society" and said it would start by succeeding in generating the highest voter turnout in Iowa and nationwide.

The Vermont senator said a high turnout in Iowa's caucuses Monday means he wins, but that a low turnout will result in the opposite.

On the eve of the Iowa caucuses, Joe Biden’s campaign is cautioning against reading too much into Monday’s results.

Biden senior adviser Symone Sanders says the campaign views Iowa “as the beginning, not the end” of the primary contest. She says it would be a “gross mistake” for voters and the media to not “give credence and space” to the results of the states that come next on the primary calendar.

Sanders’ comments at a Bloomberg News breakfast appear aimed at lowering expectations for Biden in the caucus. The former vice president is locked in a tight four-way race in Iowa with Sens. Bernie Sanders and Elizabeth Warren, as well as former South Bend, Indiana, Mayor Pete Buttigieg.

Biden hopes to sustain enough enthusiasm and money coming out of Iowa to make it to more diverse states where he hopes to draw strong support from black voters. His campaign is particularly focused on South Carolina, the fourth state on the primary schedule.