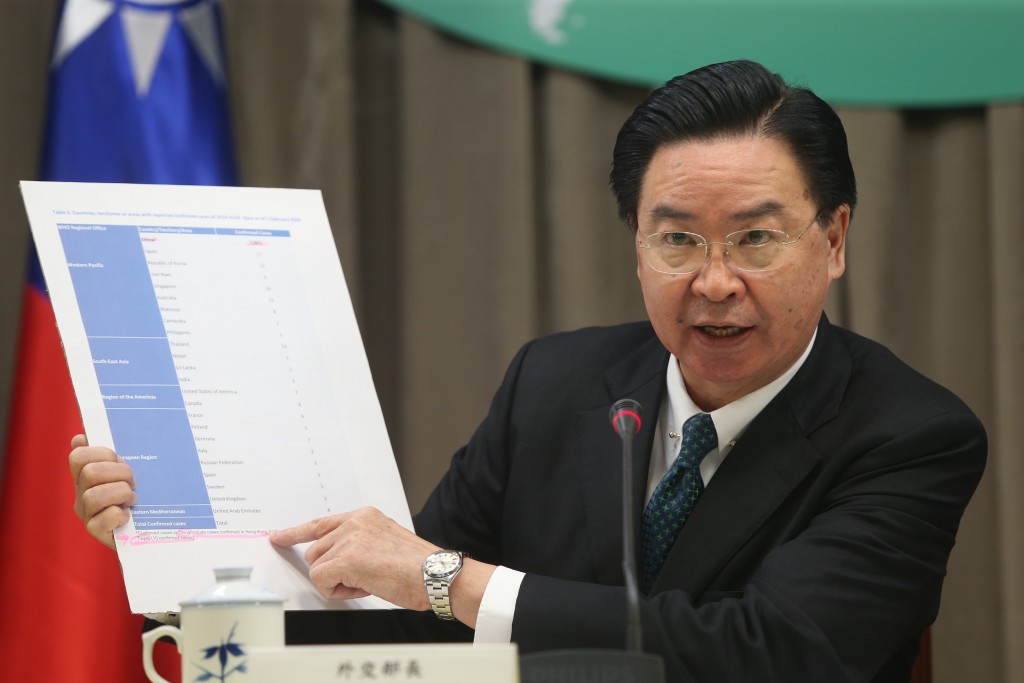 Foreign Minister Joseph Wu (吳釗燮) has blasted the World Health Organization (WHO) for treating Taiwan as part of China in the fight against the coronavirus, leading to bans of Taiwan flights, and also accused its officials of living in a "parallel universe."

Italy's government on Friday announced the suspension of all flights from China, Hong Kong, Macau and Taiwan from Feb. 2 to April 28 to prevent the further spread of the 2019 novel coronavirus (2019-nCoV) after confirming two cases of the virus Friday.

Hours later, Vietnam's civil aviation authorities also announced a similar ban for a period of 90 days, but the ban on flights between Taiwan and Vietnam was quickly reversed.

Wu blamed the WHO's report on the 2019 novel coronavirus for the decisions made by Italy and Vietnam, accusing it of providing "inaccurate information."

In the report dated Feb. 1, "Taipei" was included in a list of provinces, regions and cities of China with confirmed cases of 2019-nCoV acute respiratory disease.

Taiwan is not a member of the United Nations and is routinely listed as part of China by U.N.-affiliated organizations, but Wu said the way the figures were presented "led to the misconception that Taiwan is part of China and a seriously infected area."

Wu suspected the WHO report as a key factor in Italy's move because the suspension of flights was made on the recommendation of Italian health authorities and the announcement used the term "Taipei" and other language found in the WHO report, the foreign minister said.

Italy's flight ban against Taiwan has negatively affected thousands of travelers, and they are not likely to get compensation from airlines and from the WHO, Wu said.

"I would like to publicly call upon the WHO to recognize the simple fact that Taiwan is Taiwan and it is not part of the People's Republic of China," Wu said, stressing that health care in Taiwan and China is administered by separate authorities, as are their flight information regions.

Wu also criticized some of the body's officials who have praised Beijing for its handling of the coronavirus, describing them as living in a "parallel universe."

He said the WHO was not being true to its motto of "health for all" and "leaving no one behind."

The coronavirus has been declared a global public health emergency by the WHO, leading many countries to impose strict restrictions on travel to and from China.

As of midnight Saturday, there were 14,380 confirmed cases of the respiratory illness in China and at least 304 deaths, leading to China's increasing isolation to prevent the spread of the disease outside its borders.