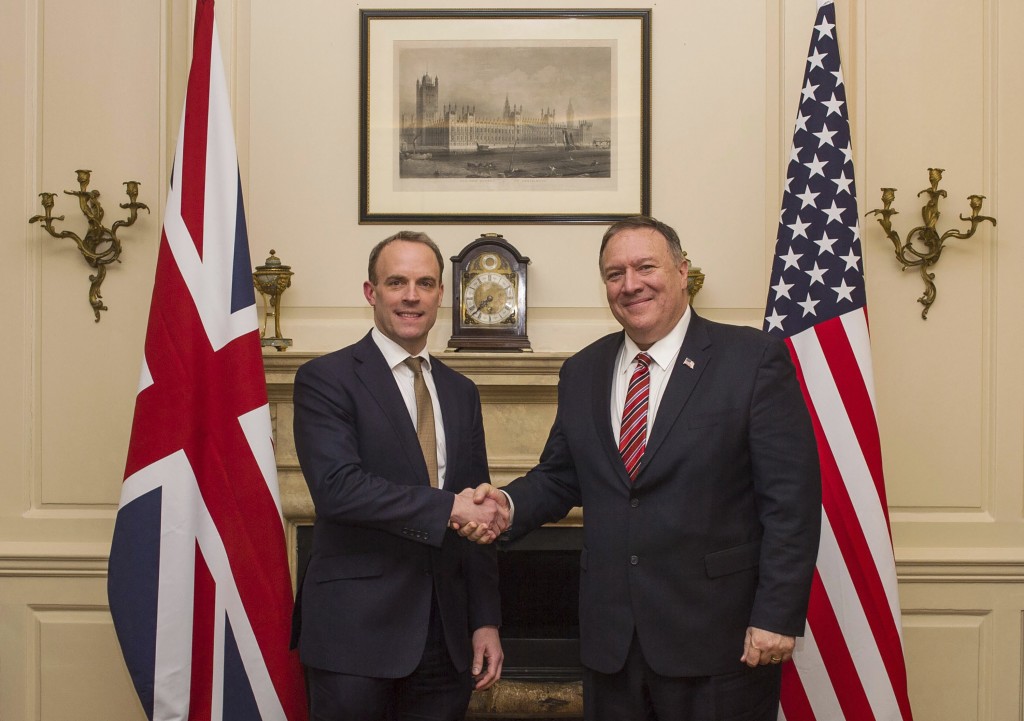 LONDON (AP) — U.S. Secretary of State Mike Pompeo is in London on the cusp of Britain's departure from the European Union for talks focused on a post-Brexit free trade deal and the U.K.'s decision to allow the Chinese tech company Huawei to play a role in the country's high-speed wireless network.

As President Donald Trump's Senate impeachment trial nears a close in Washington, Pompeo was to meet British Prime Minister Boris Johnson on Thursday to re-register American concerns about Huawei and the possibility that its entry into the market could affect U.S.-Britain intelligence cooperation.

U.S. officials said they believed the British decision wouldn't greatly affect negotiations on a trade deal, but could hurt other aspects of the relationship upon which Britain is counting after its divorce from the EU that takes effect on Friday.

“We were urging them to make a decision that was different than the one that they made, and now we’ll have a conversation about how to proceed,” Pompeo told reporters traveling with him on the trip to Europe and Central Asia that will also take him to Ukraine, Belarus, Kazakhstan and Uzbekistan.

“We’ll evaluate what the United Kingdom did," he said. “It’s a little unclear precisely what they’re going to permit and not permit, so we need to take a little bit of time to evaluate that. But our view is that we should have Western systems with Western rules, and American information only should pass through trusted networks, and we’ll make sure we do that.”

The U.S. has been lobbying European allies to ban Huawei over concerns it could be compelled to help with electronic eavesdropping after Beijing enacted a 2017 national intelligence law. U.S. officials also worry that 5G networks would rely heavily on software, leaving them open to vulnerabilities, and have repeatedly warned they would have to reconsider intelligence sharing with allies that use Huawei. The company has denied the allegations.

On Tuesday, Britain decided to let Huawei have a limited role supplying new high-speed network equipment to wireless carriers, ignoring Washington's warnings that it would sever intelligence sharing if the company wasn't banned.

Britain's decision was the first by a major U.S. ally in Europe, and follows intense lobbying from the Trump administration as the U.S. vies with China for technological dominance.

“There’s big, broad national security issues,” Pompeo said. “Our militaries operate together. There are enormous trade issues. There’s big commercial issues. And there are obviously issues that relate to telecoms and their security.”

Trump has pledged that the U.S. and Britain will negotiate a major free-trade deal as soon as Brexit is complete and officials have already begun discussions on the plan.

Britain will leave the EU on Friday after 47 years of membership, becoming the first country to leave the bloc.