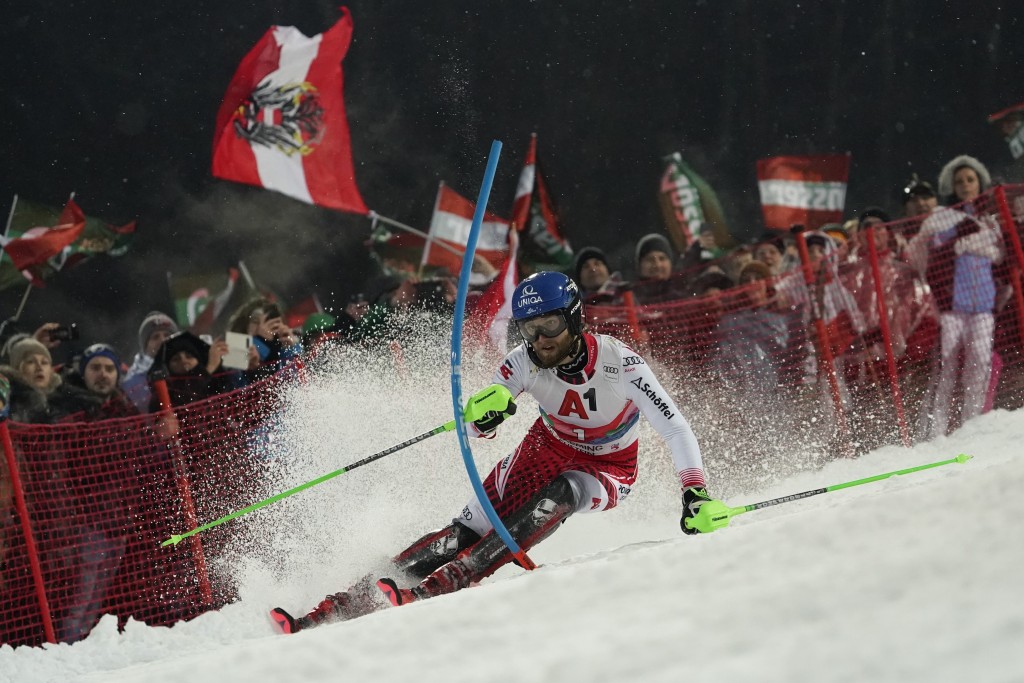 VIENNA (AP) — Austria's best chance for a slalom victory this season ended up as the team's worst result in 13 years.

Marco Schwarz took the lead after the first run in Tuesday’s night race in Schladming, giving the Austrian men's team a good chance to land its first World Cup slalom win of the season.

“I have strong nerves and I will show it,” Schwarz said on TV after he became the first Austrian this season to lead a slalom at the halfway point.

But despite an advantage of 0.14 seconds over Norwegian rival Henrik Kristoffersen, Schwarz skied out six seconds into his final run.

Kristoffersen ended up winning the race. And without Schwarz, Michael Matt finished 15th and Manuel Feller 18th as the only Austrians to score World Cup points.

The outcome made for the team’s poorest showing in a men’s World Cup slalom since December 2006, when no Austrian finished in the points.

The scenario of Tuesday’s race was a reflection of the downturn in Austrian fortunes at slaloms and giant slaloms since the retirement of Marcel Hirscher. The tally after 13 races: two podiums, zero wins.

What a contrast to last year when, at the same point in the season, the Austrians had racked up 17 podiums and 10 wins in 15 technical races. Hirscher alone contributed 12 podiums and nine victories.

After dominating men’s ski racing for nearly a decade, the record eight-time overall champion called it a career in September. The first months after Hirscher’s retirement have shown how much the Austrian success rate was depending on him.

Only one of the 19 race wins in the past two seasons came from another member of the team, when Schwarz won the city event in Oslo on New Year’s Day in 2019.

This season, Schwarz has been the only Austrian to get a top-three finish in a slalom or a GS, coming third in Adelboden and runner-up in Kitzbuehel.

His results came after recovering from tearing his ACL in February.

An injury has also affected Feller, who had two podiums last season. He was forced to sit out the races in December with back problems, which are still hampering him.

The third Austrian to get into the top three of a technical race in recent years, Matt, has been lacking confidence since the first race of 2020.

In Zagreb, Matt was 0.07 seconds off the lead in second after the opening leg. But he crashed out early in his final run and has had only one top-10 result in five slaloms since.

“The team is in a new situation. In the past they always wanted to beat Hirscher or at least annoy him, because he was the best in the world. That was the target,” the team’s slalom coach, Marko Pfeifer, told Austrian broadcaster ORF. “When Hirscher suddenly retired, it opened a new reality.”

The decline in results might even cost Austria the Nations Cup, which it has won every single year since the 1989-90 season.

The ranking, which adds all men’s and women’s World Cup points by racers from the same nation, hardly gets noticed outside Austria, but Switzerland won’t mind ending their rival’s reign after three decades.

While Schwarz, Feller and Matt are struggling to fill Hirscher’s shoes, there have also been some positive signs from the team. Several lower-ranked skiers are developing well, and while they yet lack consistency on ski racing’s highest level, they have left their mark on a few races.

The next chance to get the first victory is this Sunday at a giant slalom in Garmisch-Partenkirchen, Germany.

Spoiled with a flurry of successes in the technical events for a long time, fans in ski-mad Austria are meanwhile putting their hopes in the speed racers, who have won four events so far.

Most notably last Saturday in Kitzbuehel, where Matthias Mayer became the first skier from the home team since 2014 to win the classic Hahnenkamm downhill on the Streif course.

For many Austrian fans, that was the most important ski race of the year anyway.