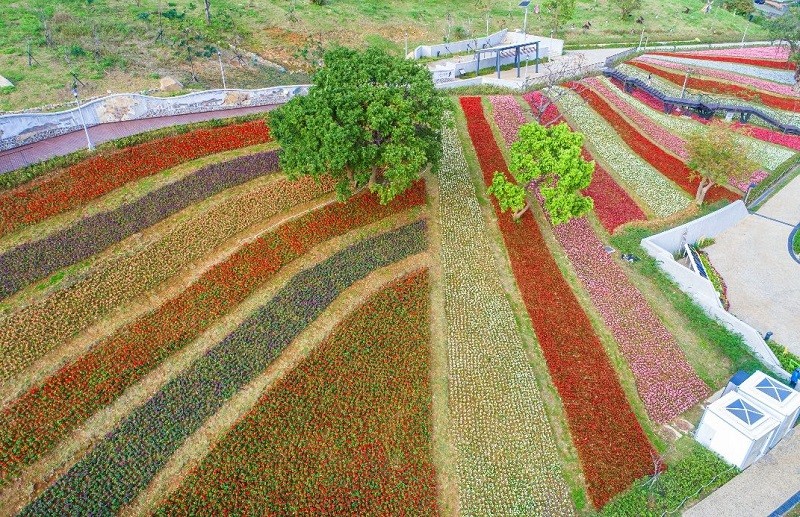 TAPEI (Taiwan News) —The visual sensation of the famed Kamifurano flower fields in Japan has been recreated at a new park in Taipei’s Beitou District, the city’s Parks and Street Lights Office (PSLO) said in a news release on Jan. 23.

The PSLO has made the most of the unique sloping terrain of Ki-Pataw Shan-Tseng-Chi Park (北投社三層崎公園) to create the multi-layer flower landscape, which has just recently been made open to the public, the release said. It went on to say that a map had been released showing recommended attractions and places to eat in the neighborhood.

PSLO Director Chen Rong-xing (陳榮興) said that Ki-Pataw Shan-Tseng-Chi Park is situated on the mountain slope across from the Fire Department’s Xiushan branch. The address of the fire station is No. 50, Xiushan Road, Beitou District (北投區秀山路50號).

Yangmingshan National Park Headquarters director Lin Chao-chia (林晁嘉) said that the mountain slope located on the edge of Beitou’s downtown area was turned into a park in 2019 and the flower field was created using more than 90,000 colorful flower pots. Lin added that the plants selected for the Ki-Pataw Shan-Tseng-Chi flower field consist mainly of three species: scarlet sage, wax begonia, and silver ragwort. He added that the bloom would last until the end of February and urged the public to take a look.

Transportation
By MRT: Get off at MRT Xinbeitou Station and walk 15 minutes
By Bus：Take Danan Bus 216, 218, and 223 to Guizikeng Water and Soil Conservation Education Park (貴子坑水土保持教學園區)
By YouBike：It takes about eight minutes to ride from YouBike's MRT Xinbeitou Station to Xiushan citizens' activity center station (秀山區民活動中心站)