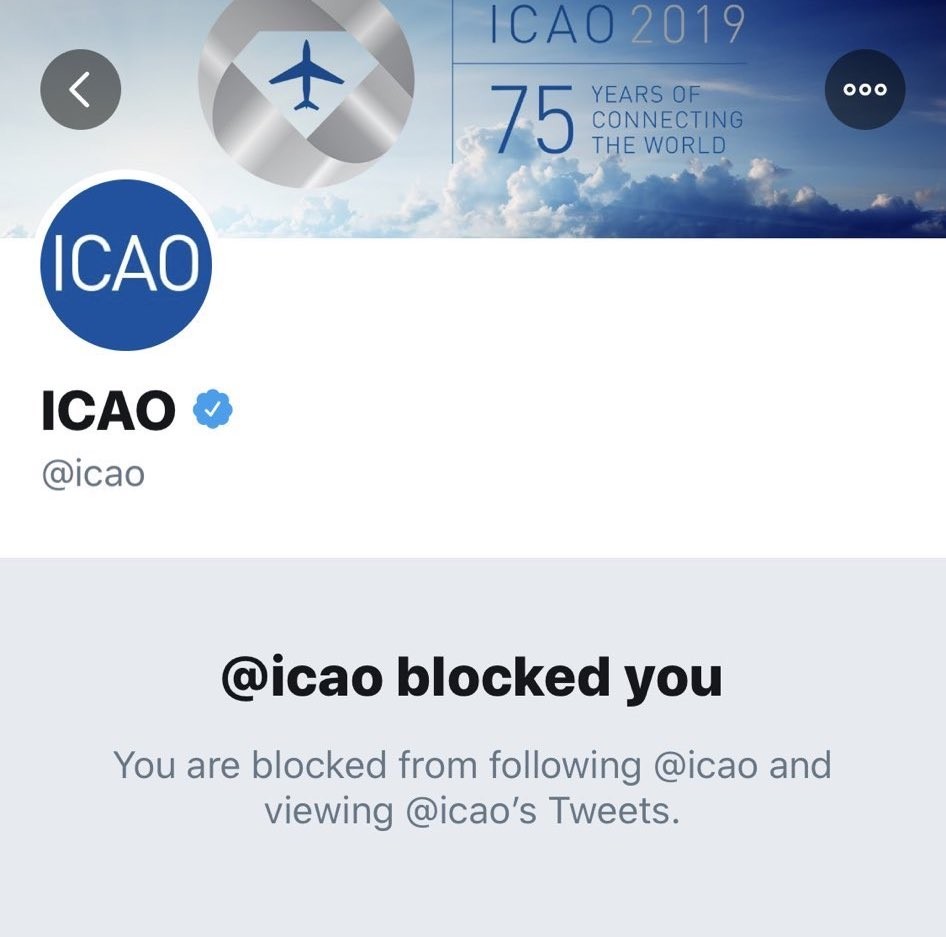 TAIPEI (Taiwan News) — The International Civil Aviation Organization (ICAO) is blocking Twitter accounts that are vocal in their criticism of the agency’s policy to exclude Taiwan’s participation.

Among those who have been blocked by the United Nations-affiliated agency are analysts from Washington-based think tanks, employees on Capitol Hill, and journalists.

Jessica Drun, a non-resident fellow at the D.C.-based Project 2049, tweeted last week that ICAO should allow Taiwan’s participation in light of the novel coronavirus (2019-nCoV) outbreak, which started in the Chinese city of Wuhan in December. Drun was blocked by ICAO on Saturday (Jan. 25), as were many others who tweeted similar critiques of the agency, which has not invited the island nation to its general assembly since 2013.

ICAO’s dogmatic approach has drawn critical comments over the last few days, and the agency censored them as well. ICAO even blocked accounts that simply mentioned “Taiwan” in their tweets or comments.

Amid a barrage of criticism on social media, ICAO on Tuesday (Jan. 28) tweeted: “Irrelevant, compromising and offensive material will be removed and the publisher precluded.” Later, it also retweeted a video posted by UNICEF about countering cyber bullying. The incident has raised concerns from the U.S. Congress, which has been supportive of Taiwan’s participation in international organizations, including ICAO and the World Health Organization.

“The United Nations’ ICAO plays a valuable role in ensuring aviation security. But silencing voices that oppose ICAO’s exclusion of Taiwan goes against their stated principles of fairness, inclusion, and transparency,” said the U.S. House Foreign Affairs Committee via Twitter. “If the Chinese Communist Party spent less time seeking to deny Taiwan participation in what should be apolitical international organizations and more time improving public health inside its borders, maybe we wouldn’t be facing a potential global epidemic,” tweeted U.S. Representative Mike Gallagher, in response to ICAO’s social media censoring.

Established in 1944, ICAO is responsible for the planning and development of international air transportation. It has been led by Secretary-General Liu Fang, who previously served in China’s civil aviation agency, since 2015.

Via a statement issued on Tuesday evening, Taiwan’s Ministry of Foreign Affairs expressed “regret” and “discontent” about ICAO censoring Twitter comments considered in favor of Taiwan. It described the agency as “kowtowing to the Chinese government” and lacking professionalism and impartiality.

The ministry said Taiwan’s Representative Office in Canada had lodged a protest against the aviation agency, headquartered in Montreal, and that it would work with international partners to consider a response. “As the world suffers the spread of the novel coronavirus from Wuhan, China, the urgent need for transnational collaborations on [combatting] the borderless disease and ensuring flight safety is even more highlighted,” said the ministry.