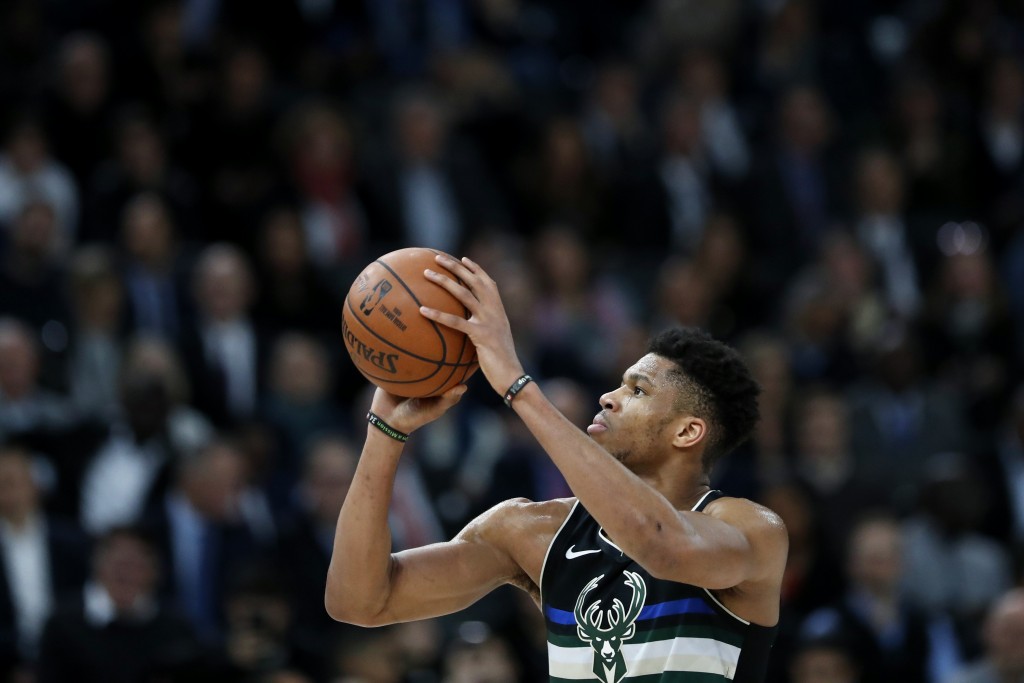 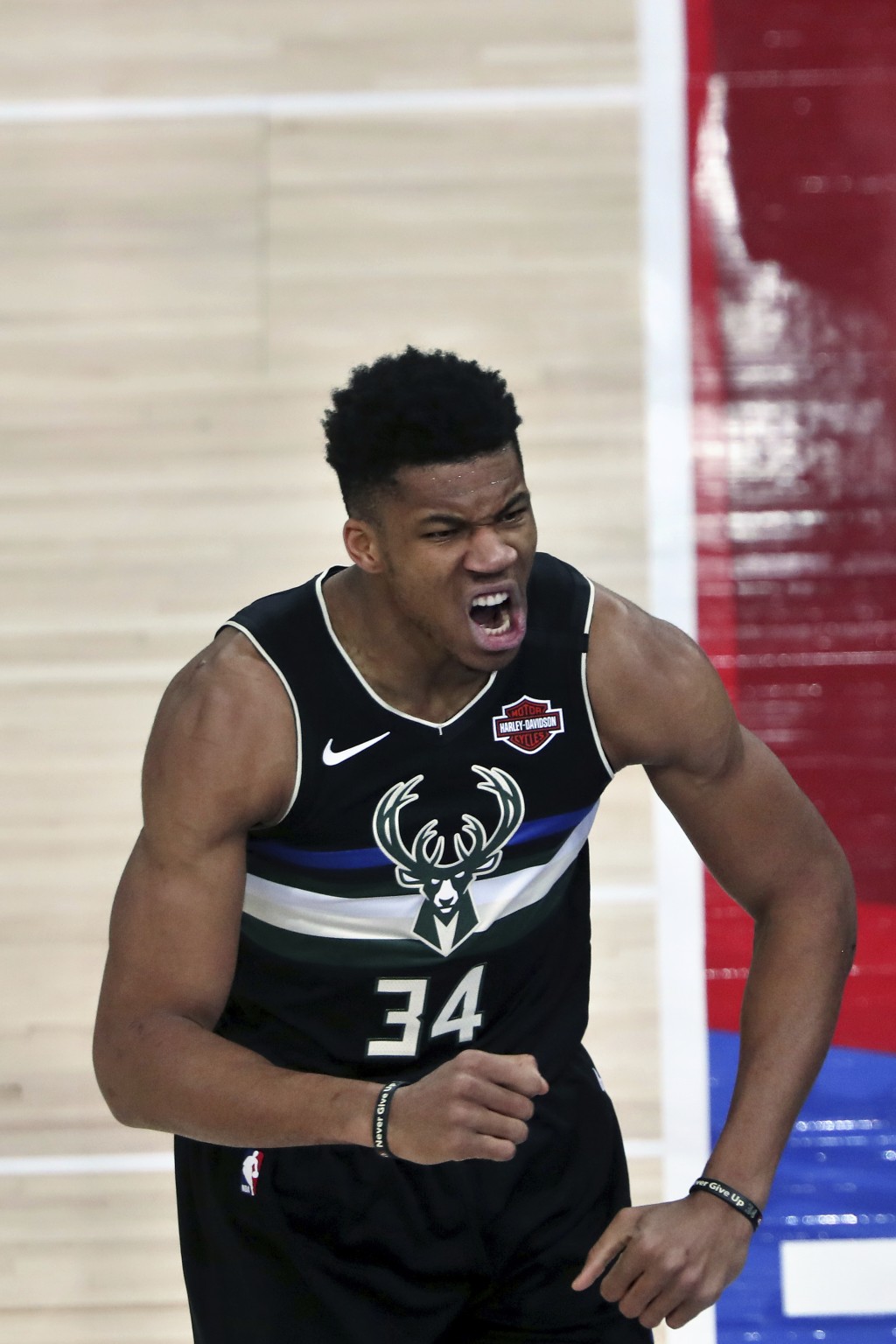 PARIS (AP) — Giannis Antetokounmpo had 30 points and 12 rebounds and the NBA-leading Milwaukee Bucks beat the Charlotte Hornets 116-103 on Friday night in the first NBA regular-season game in France.

Milwaukee improved to 40-6 with its eighth straight victory. The Bucks have the best 46-game start in franchise history. They were 39-7 in 1970-71 when they went on to win the NBA championship.

Eric Bledsoe added 20 points and five assists for the Bucks.

Malik Monk led Charlotte with 31 points. The Hornets have lost eight in a row.

Milwaukee rallied to tie it at 78 going into the fourth quarter. Pat Connaughton put the Bucks in front with a dunk in the fourth. Then Antetokounmpo got going, drawing a foul as he slalomed through the defense.

MINNEAPOLIS (AP) — Russell Westbrook scored a season-high 45 points and had 10 assists and Houston overcame another tough night from James Harden to rally past Minnesota.

Westbrook helped key a second-half comeback after Minnesota led by six points in the third quarter. He finished 16-of-27 shooting, was 13 of 13 from the free-throw line and added six rebounds. Eric Gordon scored a season-high 27 points off the bench for Houston, which won its second straight game following a four-game losing streak.

Harden, who went 1 for 17 from 3-point range in a home loss to Oklahoma City on Monday night, was 3 of 13 overall and 0 for 6 from beyond the arc against Minnesota. He finished with a season-low 12 points. Harden also left the game for part of the third quarter, limping badly to the bench before returning in the fourth.

Karl-Anthony Towns had 30 points and 12 rebounds for Minnesota. The Timberwolves have lost eight straight.

Zion Williamson scored 15 points in about 21 minutes for New Orleans. The Pelicans dropped to 0-2 since the NBA's top overall draft choice was activated for the first time this season Wednesday night.

Michael Porter Jr. and Torrey Craig each had 15 points and 10 rebounds for Denver. The Nuggets improved to 3-2 since guard Jamal Murray went out with a left ankle sprain.

A night after being voted to start the All-Star Game, Siakam had two big baskets down the stretch. He drove for a dunk with Toronto leading by only one, then nailed a 3-pointer with 21 seconds remaining after the Knicks had closed within three.

Fred VanVleet and Norman Powell each added 16 points for the Raptors. They beat the Knicks for the eighth straight time.

Marcus Morris and Damyean Dotson each scored 21 points for the Knicks. They've dropped five of six.

Shai Gilgeous-Alexander scored 24 points and Dennis Schroder added 21 for the Thunder. They shot 58% from the field and posted a season-high point total.

Trae Young had 26 points and a season-high 16 assists for Atlanta, a day after the former University of Oklahoma star was named an All-Star starter. John Collins scored 28 points.

Leonard finished with 10 rebounds and 10 assists. He was first credited with the triple-double in the third quarter — briefly, because one of his rebounds was taken away after a stat review. He then officially got it on a rebound with 3:55 left.

Jimmy Butler led Miami with 20 points. Butler left midway through the fourth after appearing to turn his right ankle for the second time in the game, capping a night when he also got inadvertently popped in the eye during the first half.

PHOENIX (AP) — Devin Booker had 35 points and 10 assists before fouling out with 1:31 left and Phoenix held on to beat the Spurs, snapping an 11-game skid in San Antonio.

Booker has scored at least 30 points eight times in January and in 17 games this season. He's averaging 31.3 points in 12 games this month.

DeMar DeRozan had 30 points and eight rebounds for San Antonio.

DETROIT (AP) — Jaren Jackson Jr. scored 24 of his 29 points in the first half and hit a big 3-pointer in the fourth quarter in Memphis' victory over Detroit.

Dillon Brooks scored 22 of his 27 points in the second half for Memphis, and Ja Morant had 16 points and 12 assists.

Derrick Rose had 22 points for Detroit. Pistons center Andre Drummond sat out because of a lacerated lip.

SAN FRANCISCO (AP) — T.J. Warren scored 21 of his 33 points in the first half, Doug McDermott made four 3-pointers in the fourth quarter and Indiana held off Golden State.

D’Angelo Russell had 37 points for Golden State. The Warriors lost for the 13th time in 14 games and fell to an NBA-worst 10-37.

Golden State was working to complete a trade with Dallas that would send Willie Cauley-Stein to the Mavericks in exchange for a second-round draft pick. The deal will reportedly be finalized when Dallas makes room on its roster for the 7-foot Cauley-Stein.