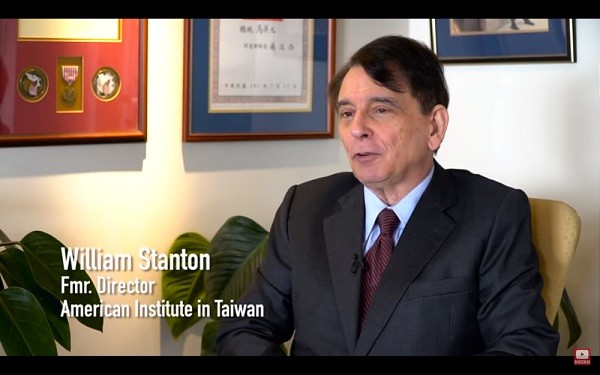 TAIPEI (Taiwan News) — In an interview with China Uncensored, Former Director of the American Institute in Taiwan (AIT) William A. Stanton said that the U.S. would be turning its back on its core principles if it failed to come to the aid of Taiwan if Communist China attacks, that full diplomatic recognition would be a "very risky confrontation," and that the country is a "modern miracle."

During the interview, which was published on YouTube Monday (Jan. 20), host Chris Chappell asked what the U.S. should do if Communist China took military action against Taiwan. Stanton responded by saying, "We could no longer be the United States if we didn't step in and defend Taiwan."

He said that if the U.S. has fought wars for less noble causes such as non-existent weapons of mass destruction in Iraq, it surely could enter a war for a fellow democracy such as Taiwan. However, if the U.S. failed to intervene, it would show the world that "We don't stand for principle. We just look after our own interests."

Stanton said that Taiwan is geostrategically important. He stated that one of the reasons the communist country wants it is to build bases and extend its reach into the Western Pacific.

If Taiwan were to fall, Stanton said this would in effect rupture the first island chain of defense, of which Taiwan is considered a key link. Stanton then alluded to the fact that U.S. General Douglas MacArthur referred to the island as an "unsinkable aircraft carrier."

He said that Singapore, Indonesia, and Malaysia, among other countries in the region, would be greatly concerned if Taiwan fell to China, giving the latter primacy over the South China Sea. Stanton said that if China controlled Taiwan, U.S. allies South Korea and Japan would be isolated and "The PRC would call the shots."

When Chappell asked if the U.S. should just go ahead and normalize relations with Taiwan, Stanton advised that, although Taiwan is clearly an independent country in his estimation, the U.S. should first consult with the Taiwanese government to assess what additional threats they would face from China as a result.

He warned that China is much stronger now militarily than in the past and that it could be a "very risky confrontation. Not only for us but also for the PRC. We're not pushovers for sure."

Chappell then asked Stanton what he meant in an article in which he referred to Taiwan as "a modern miracle." Stanton said that within fewer than four decades, Taiwan "went from poverty to prosperity and a military dictatorship to democracy."

He called Taiwan a model of democracy in Asia and many other parts of the world. Stanton added that the "real miracle" is the fact that it has achieved so much without any natural resources, relying on "the skills, the hard work, the education of its people."

Stanton closed by saying that Taiwan had accomplished this with little in the way of outside help after being diplomatically isolated since 1972: "that's a miracle I think!"