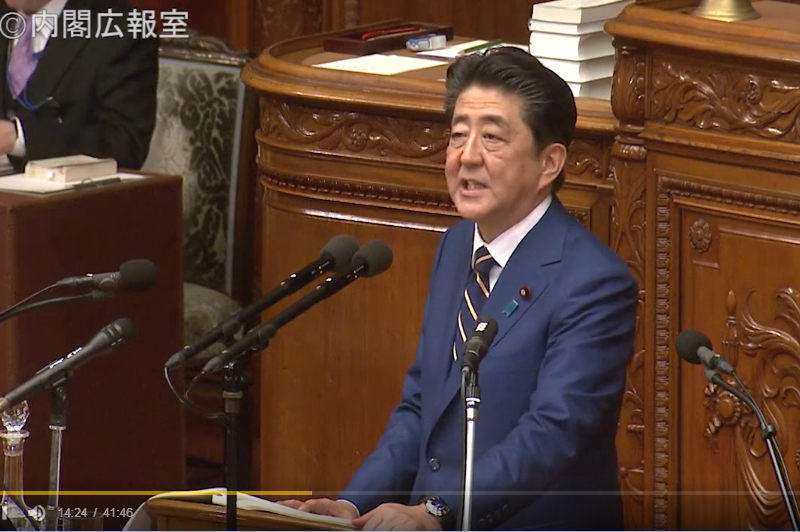 TAIPEI (Taiwan News) — Following a message of congratulations to Taiwanese President Tsai Ing-wen (蔡英文) on her re-election, Japanese Prime Minister Shinzo Abe brought up Taiwan three times at the Diet, the first mention of Taiwan by a Japanese prime minister in the legislative body in 14 years.

In his policy speech marking the start of the regular session of Japan's parliament, Abe spoke of plans for the Tokyo 2020 Olympics and Paralympics as well as the recovery from the catastrophic 2011 earthquake. He expressed the hope that international visitors would see the resilience of the regions once devastated by the disaster, according to Japanese media.

In addition to the magnificent Athletes Village near Tokyo Bay, which will host over 15,000 Olympic and Paralympic athletes from 205 nations, the Japanese government is set to designate a few volunteering disaster-hit areas to receive the representatives of countries that helped Japan during the 2011 quake as a gesture of gratitude while boosting the areas' reconstruction efforts.

Noda Village in Iwate Prefecture, for example, has volunteered to receive Taiwanese athletes during the games.

During his speech, Abe voiced appreciation for international support in the relief and reconstruction efforts after the quake, saying a few local cities would like to take the opportunity to return the favor. Kamaishi City, for example, has volunteered to serve Australian athletes, as Australian football player Scott Fardy stayed in the devastated Kamaishi area after the quake to relay supplies to victims.

Abe went on to say that Noda Village has volunteered to serve Taiwanese athletes and that Nihonmatsu City in Fukushima Prefecture will receive athletes of Kuwait, CNA reported.

In addition to Noda, 23 of the 478 volunteering municipalities have expressed a desire to receive Taiwanese athletes, including Otsuchi in Kamihei District, Minamisoma City, and Kitashiobara Village in Fukushima Prefecture, making Taiwan the most warmly received country.

Abe mentioned Taiwan three times throughout his speech, according to the CNA, receiving a round of applause from the Diet members each time. This is significant, as the country has not been brought up in a prime minister's policy speech in the legislative body for 14 years.

President Tsai tweeted in Japanese to express her joy after learning that Abe had referenced Taiwan in the Diet, and she shared the video clip of his speech.