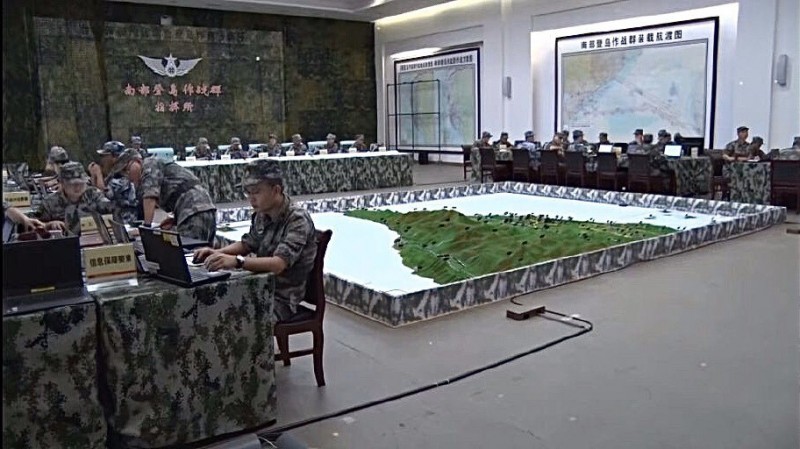 TAIPEI (Taiwan News) — A photo surfaced Sunday (Jan. 19) on Weibo showing People's Liberation Army (PLA) soldiers sitting next to a map of Taiwan that appears to indicate a southerly route for China's invasion of Taiwan, first going through Kinmen and Penghu, before landing troops in southern Taiwan.

After President Tsai Ing-wen (蔡英文) enjoyed a landslide victory in Taiwan's elections on Jan. 11, Communist China has been doubling down on its rhetoric about the tattered "one country, two systems" framework and adhering to the "1992 Consensus" — expressing its opposition to "Taiwan independence" despite the fact that Taiwan has never been a part of Communist China. In a joint statement issued with Myanmar on Saturday (Jan. 18), China reaffirmed the "one-China" principle and categorized "Taiwan as an inalienable part of the People's Republic of China's territory."

In a statement on Sunday (Jan. 19), Taiwan's Ministry of Foreign Affairs spokeswoman Joanne Ou (歐江安) responded by saying: "The ministry condemns such false statements that diminish the sovereignty of the Republic of China." Ou added: "Taiwan is not part of China, and only the Taiwanese government elected by its people can represent Taiwan in the international arena."

Later that afternoon, two accounts on the tightly government-orchestrated social media site Weibo, Tianfu Community and Dingsheng Forum, released a photo of PLA soldiers seated with their backs turned to a massive topographical model of southern Taiwan. The model is covered in black marks, appearing to show key strategic locations the PLA plans to seize during an invasion.

Among the routes displayed on the map, one shows PLA forces first seizing Kinmen, followed by Penghu, before moving on to invade the southern part of Taiwan proper. Another map on the wall appears to show PLA forces breaking from their beachhead into three routes of attack after landing in southern Taiwan.

Ominously, one Weibo user wrote, "Isn't that a topographical map of the Taiwan area? This is such an exciting development for the new year!" However, in an interview with BBC News that aired on Wednesday (Jan. 15), Tsai indicated that such a venture by China could come at a high price because Taiwan has strengthened its capabilities and, "Invading Taiwan is something that is going to be very costly for China."