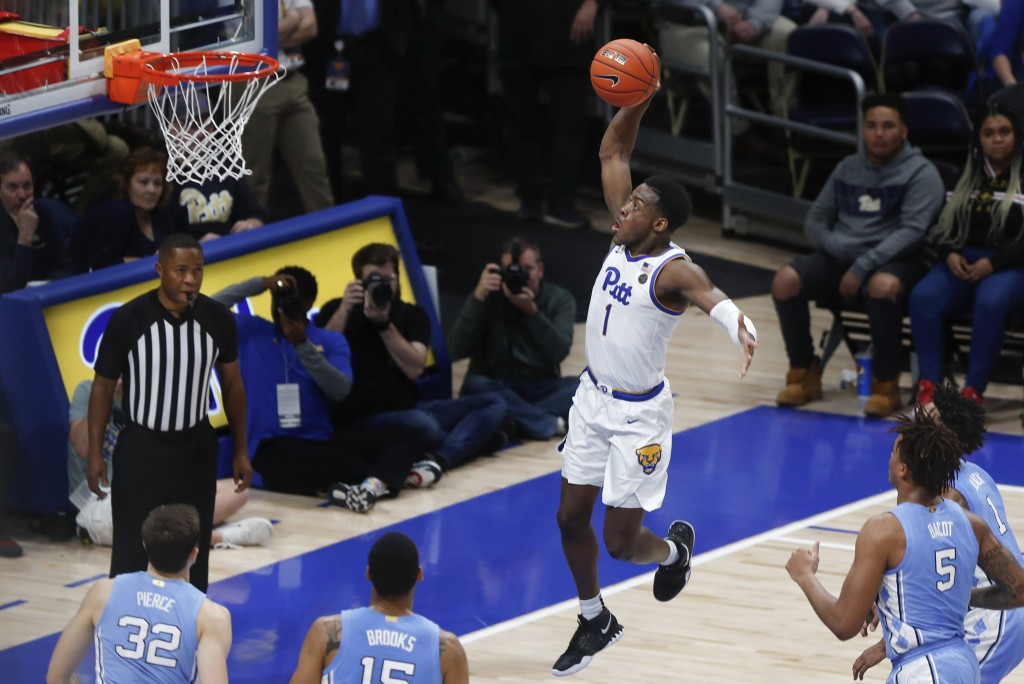 Pitt (12-6, 3-4 Atlantic Coast Conference) needed less than 10 minutes to build a double-digit lead and never let the sloppy Tar Heels (8-9, 1-5) get back in it. The Panthers forced 16 turnovers and held North Carolina to 32% (19 of 60) shooting to take both games against the Tar Heels for the first time since joining the ACC in 2013.

Garrison Brooks led North Carolina with 16 points and 13 rebounds, but the Tar Heels couldn't overcome a disjointed opening 20 minutes in which they struggled to develop any sort of offensive rhythm. Senior guard Brandon Robinson started and finished with 12 points in 32 minutes a week removed from sustaining minor injuries when the car he was in was struck by a car operated by an impaired driver. North Carolina fell to 2-6 without injured freshman star Cole Anthony, who is nearing the end of his rehab from minor knee surgery in December.

Anthony's return can't come fast enough for the Tar Heels, who have dropped four straight and are off to the program's worst start since the 2001-02 team opened 6-11. Head coach Roy Williams remains tied with Dean Smith with 879 career victories — fourth-most ever by a men's Division I coach. Yet Williams is still looking for his first win this decade after his team sleep-walked through the opening half and failed to recover in time.

Pitt rallied from an eight-point halftime deficit to beat North Carolina in Chapel Hill on Jan. 8. The Panthers avoided another slow start in the rematch. Murphy hit a pair of 3-pointers during a 21-4 first-half burst. Three Johnson free throws gave Pitt a 29-11 lead before the game was 12 minutes old.

North Carolina failed to respond. One sequence early in the second half symbolized its frustrating afternoon. The 6-foot-9 Brooks found himself in the block matched up against the 6-3 Johnson following a defensive switch. Brooks raised his arms frantically to call for the ball. When it didn't come, Brooks stomped his feet and turned his back to the play as Robinson tried to drive the lane, only to be called for an offensive foul.

North Carolina: Having Anthony in the lineup could go a long way to curing the Tar Heels' offensive troubles, but his presence alone might not be enough to shake North Carolina out of a funk that's seemingly appeared out of nowhere. The team's lack of effort early following a week off isn't exactly a promising sign that the Tar Heels are close to turning it around.

Pitt: The Panthers showed a dash of mental toughness after blowing a potential upset of No. 11 Louisville on Tuesday night, when the Cardinals escaped in overtime after a late offensive meltdown allowed Louisville to rally. Pitt was on the Tar Heels from the opening tip. At one point in the first half North Carolina had twice as many turnovers (8) than field goals (4).

North Carolina: Travels to Virginia Tech on Wednesday. The Tar Heels were upset by the Hokies in their last trip to Blacksburg, Virginia, in 2018.

Pitt: Hosts Boston College on Wednesday. The Panthers have dropped each of their last two meetings with the Eagles.