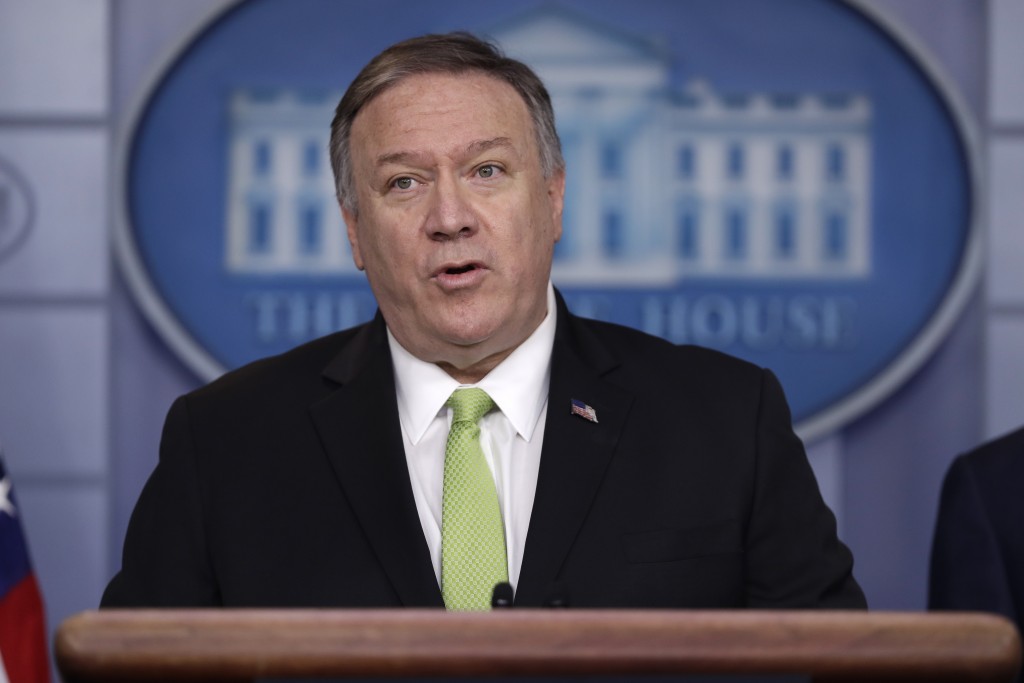 WASHINGTON (AP) — Secretary of State Mike Pompeo on Friday broke nearly 72 hours of silence over alleged surveillance and threats to the former U.S. ambassador to Ukraine, saying he believed the allegations would prove to be wrong but that he had an obligation to evaluate and investigate the matter.

In interviews with conservative radio hosts, Pompeo said he had no knowledge of the allegations until earlier this week when congressional Democrats released documents from an associate of President Donald Trump's personal attorney suggesting that Marie Yovanovitch was being watched. He also said he did know and had never met Lev Parnas, the associate of Rudy Giuliani who made the claims.

Pompeo, who was traveling in California when the documents were released, had been harshly criticized by lawmakers and current and former diplomats for not addressing the matter. The documents provided by Parnas suggested there may have been a threat to Yovanovitch shortly before she was abruptly recalled last spring.

“We will do everything we need to do to evaluate whether there was something that took place there,” he said in a radio interview with Tony Katz, an Indianapolis-based broadcaster. "I suspect that much of what’s been reported will ultimately prove wrong, but our obligation, my obligation as secretary of state, is to make sure that we evaluate, investigate. Any time there is someone who posits that there may have been a risk to one of our officers, we’ll obviously do that.”

“It is always the case at the Department of State that we do everything we can to ensure that our officers, not only our ambassadors but our entire team, has the security level that’s appropriate," Pompeo said.

Until he spoke, the State Department had declined repeated requests to offer any public defense of Yovanovitch, drawing fire from many.

The allegations, if true, are central to the impeachment inquiry into Trump, who faces a charge that he abused his presidential power by pressuring Ukraine to investigate Democratic rival Joe Biden, using military aid to the country as leverage. Trump says the inquiry is a “hoax.”

At the time, Trump’s allies were trying to have Yovanovitch, who was seen as a roadblock to a Biden investigation, removed from her post. She was recalled in late May ahead of the end of her tour.

Yovanovitch returned to Washington after being told in a late-night phone call to get on the next plane home for her own safety by the director general of the Foreign Service, according to witness testimony in the impeachment inquiry. The nature of any possible threat was not specified and remains unclear, although the Parnas documents suggest the surveillance was a prelude to some kind of action.