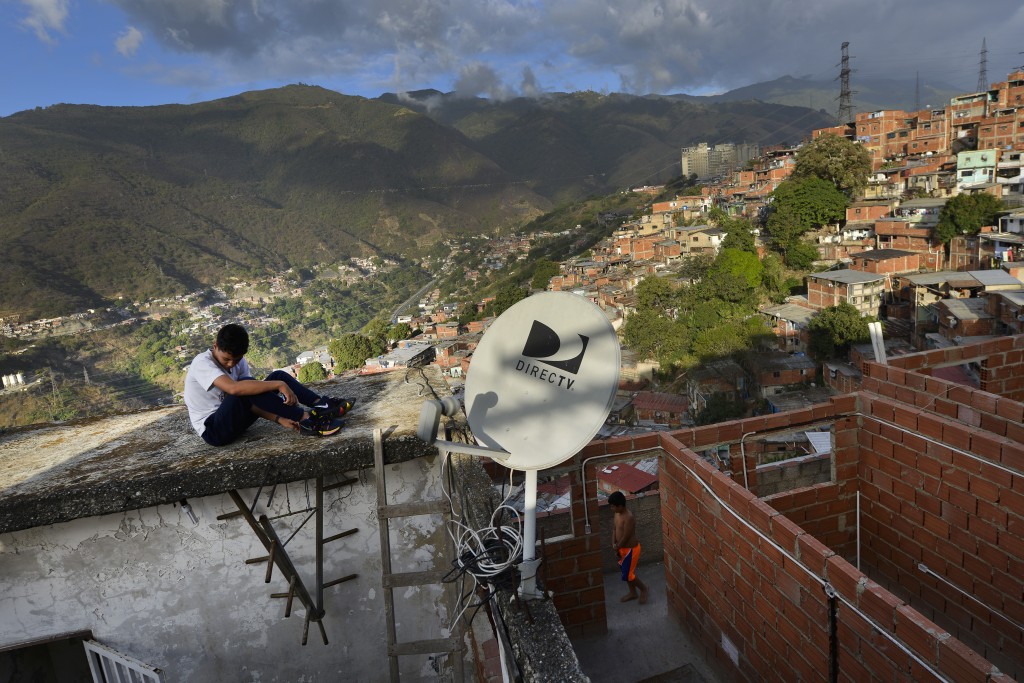 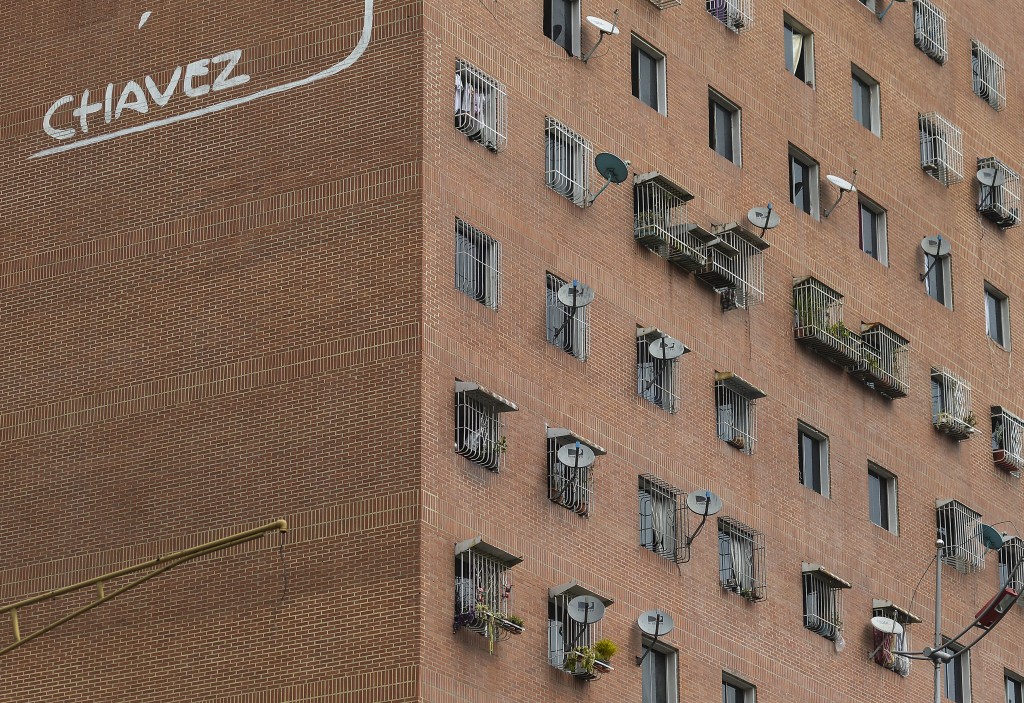 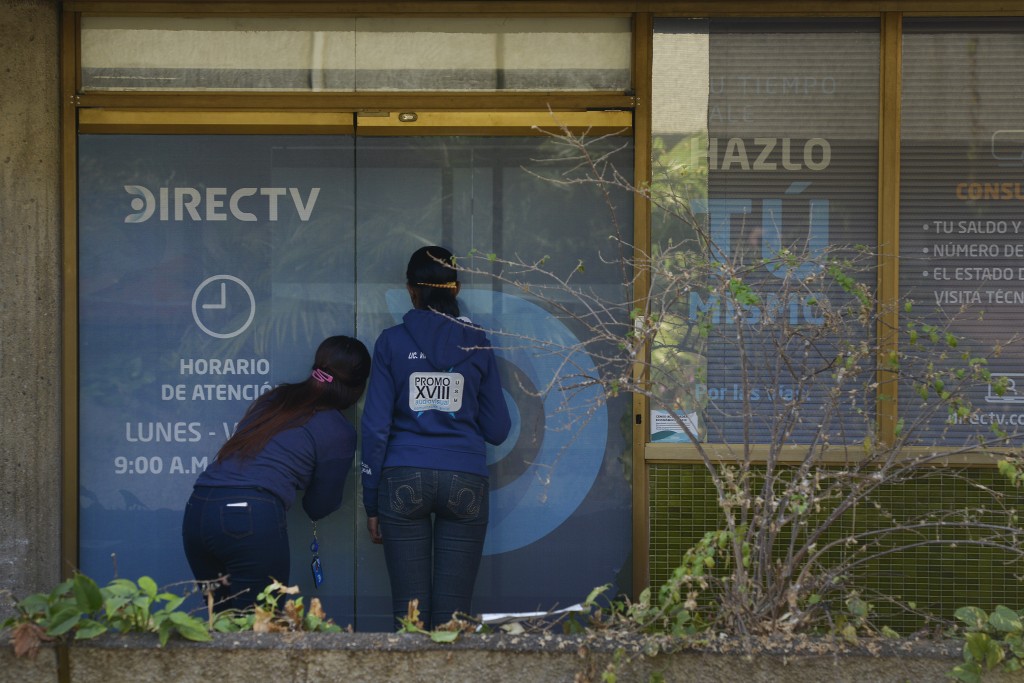 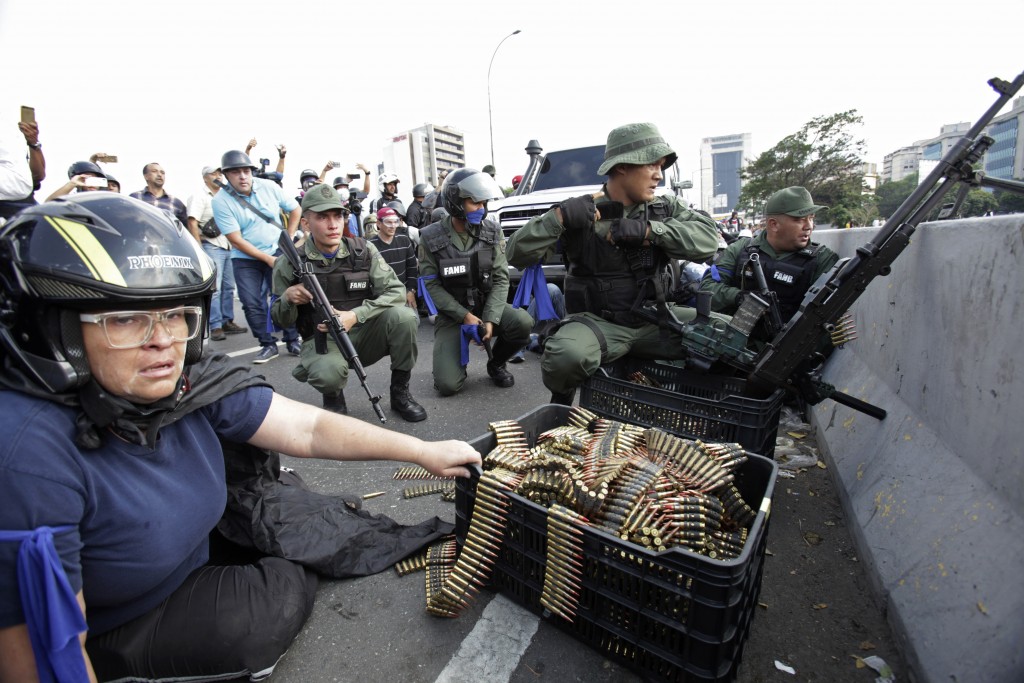 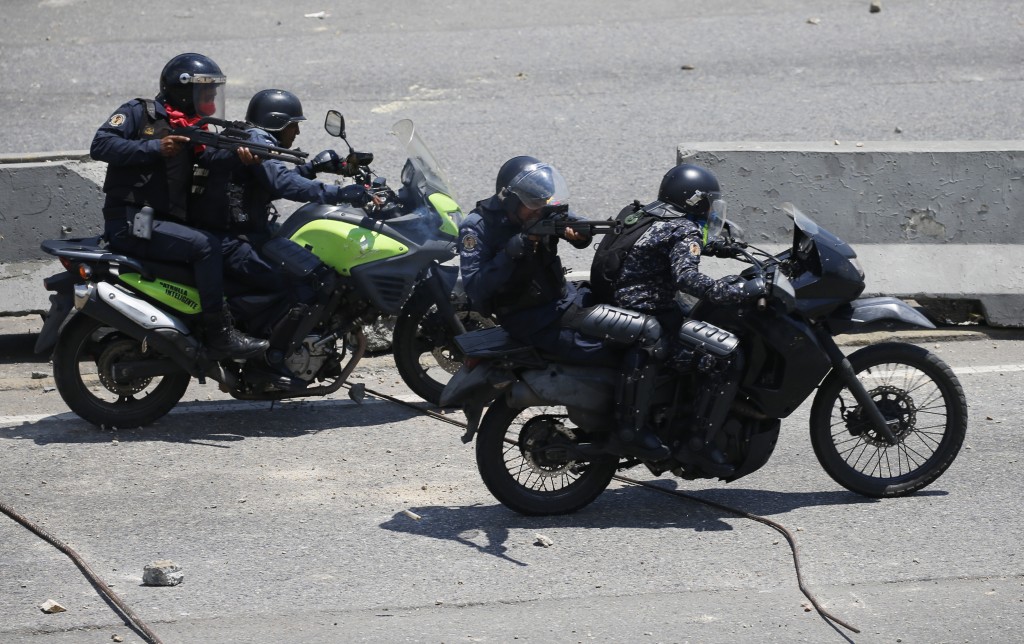 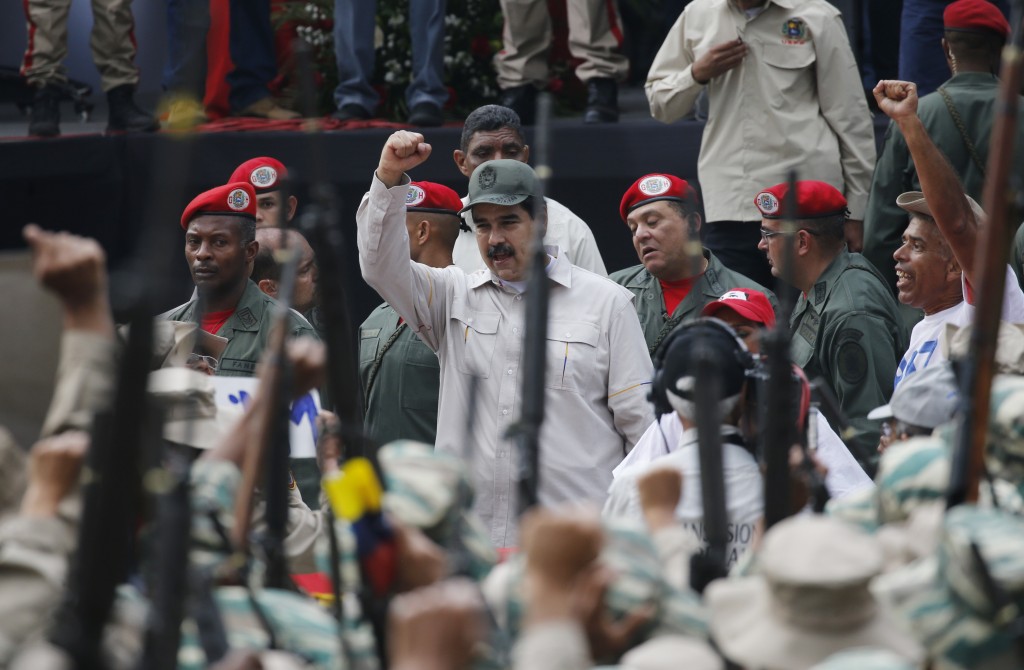 DirecTV, which is wholly owned by AT&T, quickly obliged, yanking the two networks off the air as live images of military trucks running over protesters were being broadcast to the world.

Now, pressure is building against the Dallas-based communications giant to stand up to Venezuela's government censors. In December, officials from the State Department met in Washington with executives from AT&T to urge them to help pull the plug on Maduro’s propaganda machine, according to five people familiar with the discussion.

The meeting followed months of outreach to AT&T by Venezuela's opposition, according to the five individuals. Under a plan being promoted with the Trump administration, DirecTV, Venezuela's largest pay TV operator, would restore to its lineup a half dozen international news channels that local regulators have banned in recent years, according to the five individuals.

The strategy harkens back to a Cold War playbook of leveraging information to fight anti-U.S. propaganda and undermine authoritarian rule. But instead of covertly beaming U.S.-government produced content into foreign countries as Radio Free Europe did in the former Soviet Union, this proposed effort consists of pressuring a private company to bring back access to private, international news outlets that, until recently, Venezuelans took for granted.

AT&T faces a difficult choice : comply with a Maduro regime that the U.S. government no longer recognizes and has heavily sanctioned, or go along with the opposition’s plan and risk seizure of its installations and the loss of its license on which some 700 Venezuelans depend for employment. According to corporate filings with the Security and Exchange Commission, the company doesn’t actually need a physical presence in Venezuela to beam content into the country. It could instead use broadcast centers in Argentina, Brazil or California.

The U.S. officials and opposition operators are concerned that DirecTV is being used to broadcast unfiltered state TV programming by Maduro to attack his opponents, who have no way to respond, according to the five individuals, who spoke on the condition of anonymity because of the politically-sensitive nature of the talks. Of particular concern, they said, is the private network Globovision, which is carried by DirecTV. The channel has been sanctioned by the U.S. Treasury Department and is accused by the opposition of spreading disinformation. Globovision is a customer of the AP.

Secretary of State Mike Pompeo was briefed and expressed initial support for the plans to enroll DirecTV to help undermine Maduro, according to two individuals with knowledge of the discussions.

Planning is in the early stages, the two individuals said, and it's just one of several options under consideration to pressure Maduro, who remains firmly in power even in the face of U.S. sanctions aimed at propping up Juan Guaidó, the opposition leader recognized as Venezuela’s rightful leader by more than 50 nations.

The two individuals said no decision has yet been made on how much to lean on AT&T, which is pushing back strongly against any initiative that would jeopardize operations in a nation where it has a whopping 44% market share — its largest in the region.

The move to open up the airwaves would be significant because DirecTV reaches people who are dependent on the government, such as those in the working-class barrios of larger cities and the interior, says David Smilde, from the Washington Office on Latin America, a think tank. These groups don't have other access to outside news, he says.

“This wouldn’t pose an immediate threat to Maduro, but it could complicate the longer-term ability of the government to control information,” said Smilde, who has lived on and off in Venezuela for more than two decades. “Maduro could conceivably try to confiscate DirecTV equipment from people’s homes, but this would be an extraordinarily unpopular move.”

A key to Maduro’s staying power is so-called communicational hegemony: dozens of government-controlled newspapers, social media accounts and TV channels that have replaced the once highly confrontational private news outlets with around-the-clock coverage of Maduro.

Further widening the information gap, the country’s telecommunications regulator, Conatel, since 2017 has ordered pay TV platforms, of which DirecTV is the largest, to eliminate 10 international news channels, from CNN en Espanol to Colombia’s NTN24, accusing them of violating the Law on Social Responsibility on Radio and Television. The law seeks to guarantee socially-responsible programming but has been criticized by press freedom groups as a tool for self-censorship due to its ambiguous language and heavy penalties.

When Conatel banished CNN en Espanol in 2017, it accused the network of “direct aggressions that strike against the peace and democratic stability of the Venezuelan people by generating a climate of intolerance.” The government also removed the channel that broadcast sessions of the National Assembly after the opposition won control of the legislature in 2015.

Another law passed by the Maduro-controlled constitutional assembly in 2017 threatens up to 20 years in prison for anyone publishing material deemed hateful.

“The pay TV operators aren’t the ones giving the orders,” said Marianela Balbi, executive director of the Caracas-based Institute for Press and Society, “but they are accomplices in censorship.”

International channels broadcast by DirecTV and other service providers had until recently filled a void left by Globovision, the last open-air network critical of the government, which was sold to a businessman linked to Maduro in 2013. Not long after the purchase, the channel softened its anti-government coverage. Globovision’s billionaire owner, Raúl Gorrín, has been indicted by federal prosecutors in Miami in connection to an alleged money laundering scheme involving Maduro’s stepsons. Gorrín, who was recently added to the Department of Homeland Security's most wanted fugitive list, did not respond to questions from the AP.

As government censorship has intensified, pressure on private broadcast service providers have increased, especially DirecTV, the only one operated by a U.S. company subject to sanctions imposed by the Trump administration.

Last week, Venezuelan social media briefly lit up after Carlos Vecchio, the Guaidó government’s envoy in Washington said DirecTV would be “forced” by the U.S. sanctions to remove “treasonous” Globovision from its lineup.

Accompanying Vecchio’s tweet was the photo of an order by the Treasury Department giving U.S. companies until Jan. 21 to wind down all operations with Venezuela’s largest private TV network.

But in Venezuela, like in the U.S., DirecTV is required to carry several broadcast networks, including Globovision.

Experts said the U.S. government's options for compelling DirecTV to do its bidding in Venezuela are limited.

Peter Kucik, a Washington attorney and former Treasury official specializing in sanctions compliance, said that media companies typically enjoy broad authorizations and exemptions from sanctions because it has been longstanding U.S. policy to promote the free flow of information worldwide, including into authoritarian regimes. In the case of DirecTV, it’s decision to comply with Maduro’s orders to remove channels took place prior to the blocking of the country’s government.

“It's a complex issue, but in general providing any services to the now blocked Maduro government — including taking actions at its request or direction — could incur significant sanctions risk," said Kucik.

Since Maduro took office in 2013, dozens of newspapers and radio stations have disappeared, leaving outlets that largely mimic the government’s line while ignoring such issues as human rights abuses and growing malnutrition. Meanwhile, Internet speeds are among the slowest in the world and the government frequently blocks anti-government content.

As a result, Venezuelans haven’t joined the cord-cutting wave seen elsewhere and pay TV remains a dominant source of news and information.

But AT&T hasn’t made money from its satellite service provider in Venezuela for years, due to strict government controls that keeps the price of its packages artificially low — the equivalent of around 15 U.S. cents per month. The situation has become so dire, that DirecTV in 2012 stopped importing set-top boxes, choking its growth. In 2015, it wrote down its assets in the country by $1.1 billion.

Nonetheless, as the cheapest form of entertainment in a nation ravaged by 2 million percent hyperinflation, its market share remains DirecTV's largest in the world.

Unlike other U.S. companies — General Motors, Kellogg Co. and Kimberly-Clark — that have abandoned Venezuela due to shrinking sales, government threats and the risk of sanctions, AT&T has remained, perhaps biding its time until there's an economic turnaround, or business-friendly government, said a Venezuelan telecommunications executive, who spoke on condition of anonymity because he fears retaliation.

The company may also be committed to its satellite broadcast center, which sits atop a verdant hill overlooking Caracas, the executive said. DirecTV beams about a third of its programming to several parts of South America from this location, according to corporate filings.

The company is wary of being seen as a puppet of U.S. foreign policy and embracing Guaidó, the telecommunications executive said.

One idea being discussed to force its hand is for the National Assembly — which the U.S. and others recognize as Venezuela’s only legitimate institution — to pass legislation ordering it to uphold the constitution, which guarantees access to “timely, truthful and impartial information, without censorship,” according to two of the people familiar with the project.

The same individuals pointed out that Guaidó last week took a step in that direction by saying he would soon name his own ad-hoc Conatel board to fight “the propaganda of a dictatorship that tries to distort reality.”

Some in the U.S. government, however, fear that pushing AT&T too hard could leave it to suspend operations in the country — an outcome nobody wants.

While critical news coverage is hard to come by, other channels offer programming that promotes American values and a view on the world light years from the day-to-day struggles with collapsing infrastructure and food shortage that Venezuelans face. Removing them would isolate the country even more, and drive Venezuelans, especially outside major cities, closer to the government, according to even government opponents.

Andres Izarra, a former Venezuelan communications minister who also created the state-funded regional network Telesur, agrees that there’s a woeful lack of diversity of opinion on television that keeps Venezuelans in the dark.

But he’s skeptical that any plan to open up the airwaves would weaken Maduro’s grip on power.

“This seems to be a very desperate measure, since nothing else has worked, but it won’t have any real effect on the politics on the ground,” said Izarra, who is now living in exile after breaking with the government. “All it will do is allow Maduro to try and portray himself as a victim of U.S. aggression.”