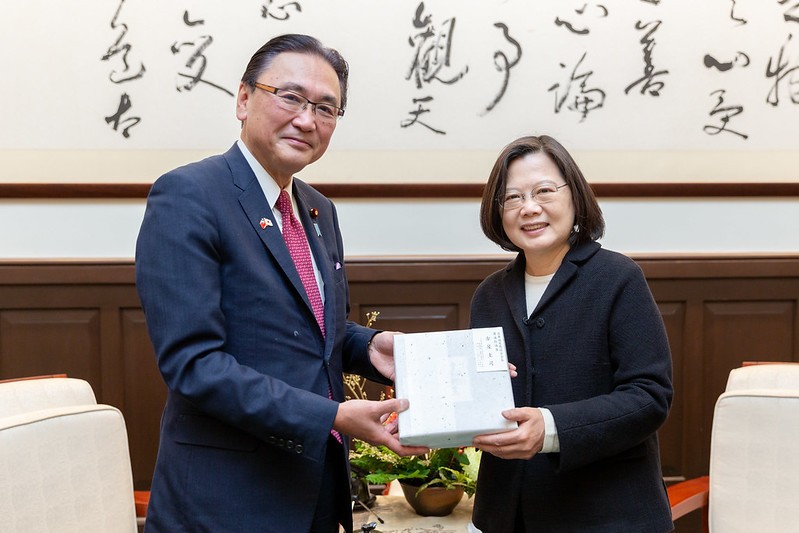 Tsai met with Furuya, the chairman of the Japan-ROC Diet Members’ Consultative Council, on Friday at the Presidential Office. During their meeting, Furuya handed the president a letter signed by Abe as the party chair of the Liberal Democratic Party to congratulate Tsai on her victory in the presidential election last week, reports said.

The election showed the maturity and values of Taiwan’s democratic system, remarked Tsai, adding that Taiwan will continue to safeguard its democracy, freedom, and sovereignty while contributing to the peace and stability across the Taiwan Strait. Tsai said she looked forward to having Japan’s assistance and support on the path to maintaining regional and global prosperity and development.

The relationship between Taiwan and Japan has continued to deepen over the past three years, said Tsai. She added that following Japan’s participation in the Global Cooperation and Training Framework, a joint Taiwan-U.S. program initiated in 2015, collaborations among the three nations would be further strengthened.

Tsai also expressed hope that Taiwan and Japan would accelerate negotiations on various economic and trade issues so as to deliver “win-win” results for both nations. She did not, however, specify further on what issues she was referring to.

“Taiwan is an important partner and a precious friend of Japan,” said Motegi. “Japan will work toward further deepening cooperation and exchanges between Japan and Taiwan based on the existing position to maintain Japan-Taiwan relations as a working relationship on a non-governmental basis,” he said.