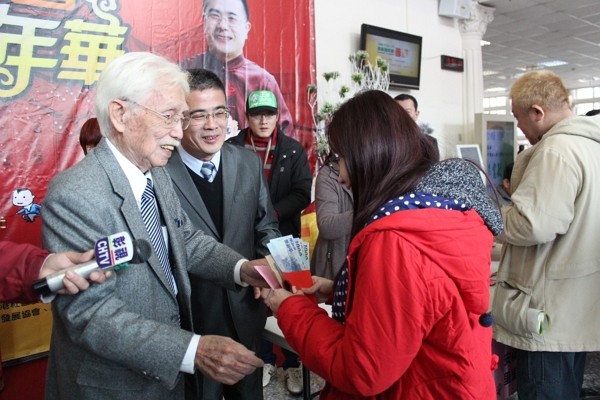 On Friday, the Democratic Progressive Party (DPP) veteran politician handed out red envelopes containing NT$5000 (US$167) each, totaling of NT$5.8 million, to residents of his hometown who are victims of poverty. He has contributed more than NT$40 million worth of charity money over the last seven years, according to Liberty Times.

As underprivileged families lined up to receive his kindness, Koo promised that he will continue to give back to the town where he formed his childhood memories. He added that he wants to share the joy of the Lunar New Year with everyone, regardless of their political stance.

Lukang Mayor Sheu Jyh-Horng (許志宏) said that Koo is still in nearly perfect health despite his age and that his insistence on giving back to the people is truly admirable. Sheu added that Koo's principle of "people before politics" is wisdom that all Taiwanese politicians should heed, reported New Tang Dynasty Television.

Koo served as former president Chen Shui-bian's (陳水扁) policy advisor until resigning in 2005, and he is a longtime advocate of Taiwan independence. However, he has been criticized for his reluctance to stand behind female politicians in the country.