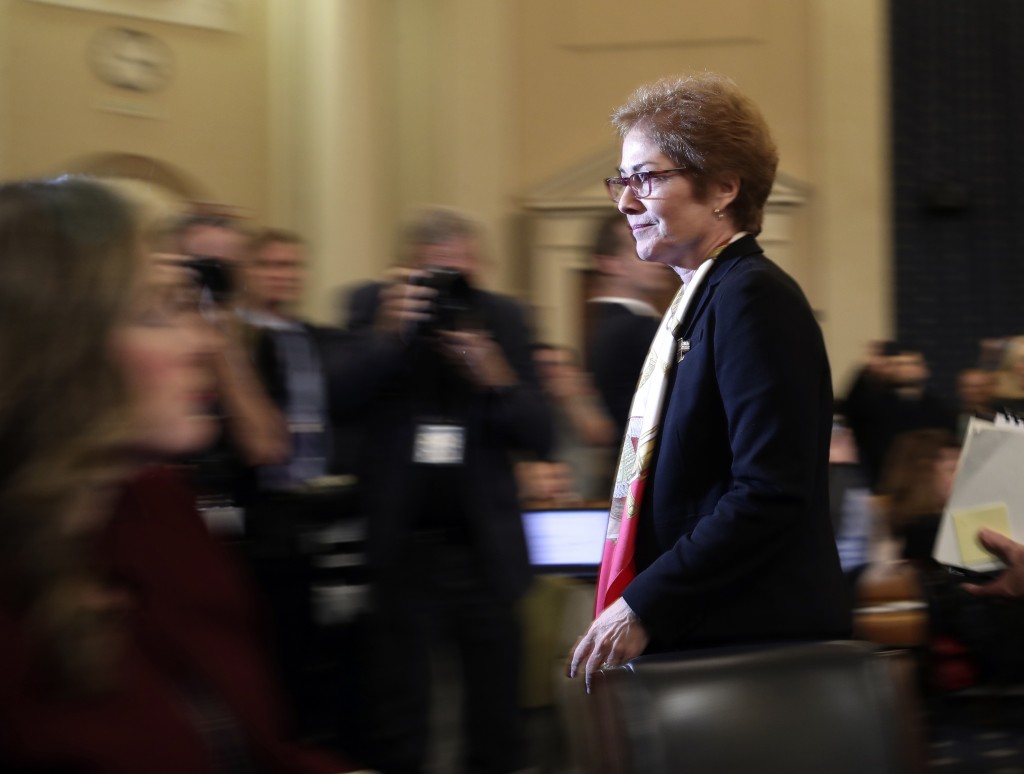 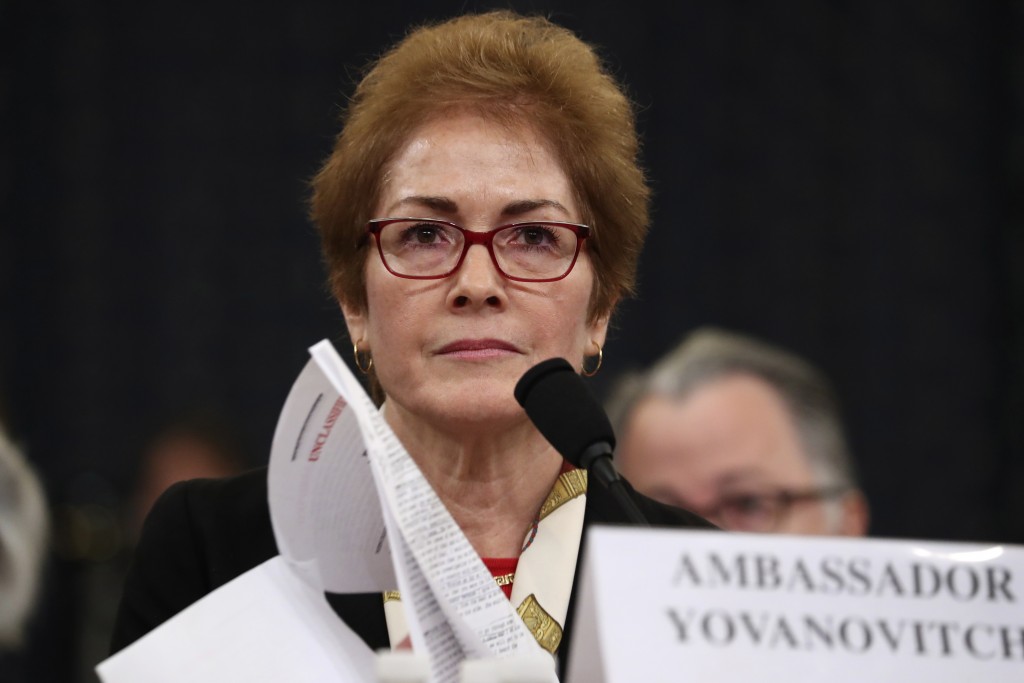 WASHINGTON (AP) — Ukraine's announcement on Thursday of an investigation into alleged surveillance of the U.S. ambassador has come as welcome relief to many in America's diplomatic corps.

But the State Department's silence on the matter has alarmed a number of current and former diplomats who are demanding action from an administration that says security of its personnel overseas is a paramount concern.

The department has declined repeated requests to offer any public defense of its envoy, the former U.S. Ambassador to Ukraine Marie Yovanovitch, two days after allegations arose that allies of President Donald Trump had her under illegal surveillance while she was stationed in Kyiv.

The allegations, if true, are central to the impeachment inquiry into Trump, who faces a charge that he abused his presidential power by pressuring Ukraine to investigate Democratic rival Joe Biden, using military aid to the country as leverage. Trump says the inquiry is a “hoax.”

At the time, Trump’s allies were trying to have Yovanovitch, who was seen as a roadblock, removed from her post. Trump fired her in May.

Earlier this week, Democrats in the House of Representatives published text messages to and from Lev Parnas, an associate of Rudy Giuliani, the president’s personal lawyer, suggesting Yovanovitch was under surveillance.

Secretary of State Mike Pompeo, who was traveling in California when the Parnas texts were released, has for months resisted calls for specific statements backing Yovanovitch. One of Pompeo's top aides, veteran career diplomat Michael McKinley, resigned in October after unsuccessfully pressing for an expression of support for Yovanovitch.

U.S. diplomats have reacted to the revelations with dismay and to the lack of public support for their colleague with disappointment. Nearly a dozen told The Associated Press that while surveillance by foreign intelligence and security services is expected and routine in many countries, such activity by Americans is of great concern, particularly if it's done by purported agents of the president.

Although those officials all spoke on condition of anonymity out of fear of reprisal, former diplomats and senior lawmakers were outspoken in their criticism, especially after Ukraine announced it would open its own probe into what happened.

“U.S. diplomats serving in the post-Soviet space often expect to be under surveillance — just not under surveillance organized by an American with links to the president’s personal attorney,” said Steven Pifer, a former American ambassador to Ukraine.

“It would be ironic for Ukraine to be more interested in pursuing the security and what happened to a U.S. ambassador than the United States and the State Department is," said Sen. Robert Menendez, D-N.J., the top Democrat on the Senate Foreign Relations Committee. "I’m looking for a vigorous investigation of what went on here, because Ambassador Yovanovitch testified that she felt intimidated.”

Rep. Eliot Engel, a New York Democrat who chairs the House Foreign Affairs Committee, said the Parnas messages are “profoundly alarming" and “suggest a possible risk" to Yovanovitch’s security in Kyiv before she was recalled.

“These threats occurred at the same time that the two men were also discussing President Trump’s efforts, through Rudy Giuliani, to smear the ambassador’s reputation," Engel said.

Engel referred to messages to Parnas from Robert F. Hyde, a Connecticut man, who claimed to be watching Yovanovitch.

“She’s talked to three people. Her phone is off. Her computer is off,” Hyde allegedly texted to Parnas, adding that Yovanovitch was under heavy security. "We have a person inside," another text message read. Another said: “guess you can do anything in Ukraine with money ... is what I was told.”

Yovanovitch returned to Washington in late May after being told in a late-night phone call to get on the next plane home for her own safety by the director general of the Foreign Service, according to witness testimony in the impeachment inquiry. The nature of any possible threat was not specified at the time and remains unclear although the Parnas documents suggest the surveillance was a prelude to some kind of action.

Because the State Department has refused to respond substantively to questions about the Yovanovitch surveillance, it's unclear whether the Bureau of Diplomatic Security or another law enforcement agency is looking into the matter. One official, who was not authorized to discuss the situation publicly and spoke on condition of anonymity, argued that the department had acted to protect Yovanovitch by recalling her early from Kyiv.

But the lack of clarity and the department's stonewalling of congressional demands for documents related to her recall have prompted a loud public outcry.

“This has to be a first in American history,” said Nicolas Burns, a former career diplomat who rose to become the third-ranking official at the State Department before his retirement and is now a foreign policy adviser to Biden's presidential campaign.

“A foreign government rushing to the defense of a senior U.S. career ambassador to defend her from people deputized by the President of the United States," Burns wrote on Twitter. “And the Secretary of State refuses to say one word in her defense."

Dana Smith, a former career diplomat who has been critical of the Trump administration, accused Pompeo of hypocrisy for staying mute about the possible threats to Yovanovitch after accusing the Obama administration and former Secretary of State Hillary Clinton of malfeasance in the deadly 2011 attack on U.S. diplomatic facilities in Benghazi, Libya.

“A threat on a U.S. Ambassador that would be treated with the utmost urgency if it came from a foreign person,” she wrote in a tweet. “Where is Mr. Benghazi now?”

The response is also in stark contrast to the quick and vocal protests that U.S. officials from Pompeo on down have registered about similar revelations elsewhere.

As recently as this month, Pompeo and State Department spokeswoman Morgan Ortagus have publicly condemned Iranian-backed militia for besieging the U.S. Embassy in Baghdad and demanded that Iraqi authorities fulfill their obligations to protect U.S. facilities there.

“Our first priority is the safety and security of U.S. personnel,” Pompeo said on Dec. 31. “The United States has acted quickly, prudently, and decisively, taking additional security measures to address threats to American diplomats and facilities in Baghdad.”

“The Iranian regime arrested the British ambassador to Iran,” she said on Jan. 11. “This violates the Vienna Convention, which the regime has a notorious history of violating. We call on the regime to formally apologize to the U.K. for violating his rights and to respect the rights of all diplomats.”

Potential violations of the Vienna Convention, the international treaty that governs diplomatic relations between states, was one of the reasons cited by Ukrainian officials for opening their investigation.