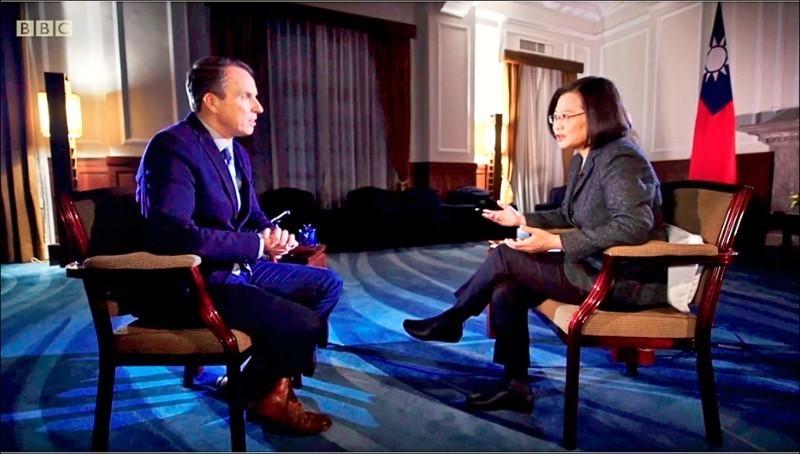 TAIPEI (Taiwan News) — After an interview with the BBC aired on Tuesday (Jan. 14) in which the newly re-elected President Tsai Ing-wen (蔡英文) took a more defiant stance against Beijing, Western netizens had a field day conjuring up new slogans guaranteed to hurt the feelings of communist Chinese.

In the BBC interview, Tsai proclaimed that Taiwan is already an independent country and that China needs to face this "reality." She also said that the communist country should give Taiwan "more respect" and that an invasion by the People's Liberation Army (PLA) would be "very costly."

When asked about the possibility of declaring Taiwan's independence, Tsai said, "We don't have a need to declare ourselves an independent state because we are an independent country already." She pointed out that the country is called the Republic of China, Taiwan and has its own government, military, and elections.

In terms of the risk of war with China, Tsai said military preparedness is important but that international support for their cause is even more important. When asked if Taiwan could stand up to an outright attack by China, Tsai said that the country has strengthened its capabilities and that "Invading Taiwan is something that is going to be very costly for China."

On Wednesday (Jan. 15), a link to the interview was posted on the r/worldnews section of the social media site Reddit, where it quickly gained over 68,000 upvotes. Many of the nearly 3,000 comments poked fun at the Chinese propaganda by creating new terms that depicted a Taiwanese dominance of, or claim to, the communist country.

The most popular title for China was "Western Taiwan" (西台灣), a term that some Taiwanese use to agitate Chinese trolls online. Another frequently mentioned name was "Taiwanese Beijing," which mocks the Olympic team name Taiwan is still forced to use: "Chinese Taipei."

In a jab at the "one country, two systems" framework that has been rapidly deteriorating in Hong Kong, a Redditor coined the term "one Taiwan, two systems." Mimicking the oft-quoted description of Taiwan being a "breakaway province that must one day be reunified with the mainland," one netizen wrote, "Those breakaway mainland provinces are rightful Taiwanese clay!"

Another wrote, "Unfortunately, it is still run amok by communist bandits. But one day...." Others took a poetic slant: "From west of Taiwan born and raised. In fear of CCP is where I spend most of my days."

Users of the Taiwanese version of Reddit, PTT, took note and were impressed with the extent to which the BBC had raised Taiwan's profile overnight. Many joined in the mockery of the CCP:

"The spokesperson of the Foreign Ministry of Western Taiwan is going to blow his top."

"Mainland Taiwan is an integral part of Taiwan."

"There cannot be one inch less of Taiwanese soil."