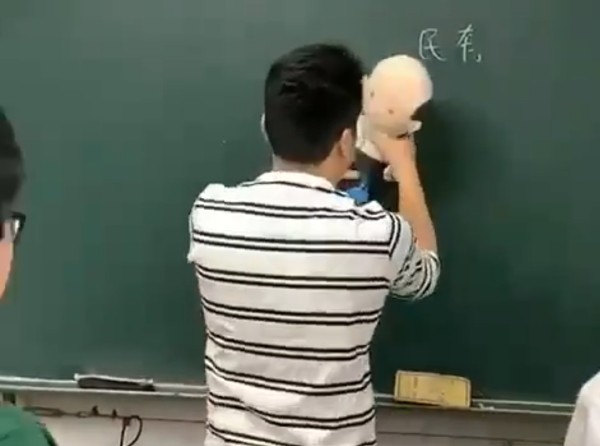 On Wednesday, the Facebook page "I'm a very simple person" (我這個人很簡單) uploaded a video of a teacher at Kaohsiung Municipal Senior High School erasing a chalkboard with a Han Kuo-yu doll. In the video titled "Teacher, your eraser?" the instructor first wipes the blackboard with the back of the doll, before moving on smear the board with its face, hands, and feet.

Although students in the foreground appear to be oblivious, some in the background can be heard calling out "That's Han Kuo-yu!" Some students can be heard giggling as the teacher continues to erase the board with different parts of Han's anatomy.

Finally, the teacher uses Han's buttock's to erase the last bit of text, spurring gales of laughter among the students. Later that evening, the school issued a press release saying that the teacher's behavior had no relation to any content being taught that day.

However, the school said that the teacher may have disregarded the doll's symbolic meaning and the feelings of the mayor's supporters, resulting in many viewers of the video feeling disrespected and offended. After the video went viral, the teacher issued a statement in which he said his actions were inappropriate and that he has expressed his apology to the school and its senior officials, reported UDN.

He said that in the future, the school will also actively require instructors to be more careful about strictly adhering to political neutrality in education. The school added that the teacher is very conscientious with his students and had never espoused his political stance to the class.

A school representative said that the doll was a gift given by one student to another and had been left behind in the classroom. Officials emphasized that he had not brought the doll to the class intentionally.

The representative said that the teacher used the eraser at a moment when the students were becoming rowdy. When asked specifically why he did it, the school official said that "the teacher just used it to get some laughs from the students," reported UDN.

The following is the video showing the teacher use a Han doll as an eraser: