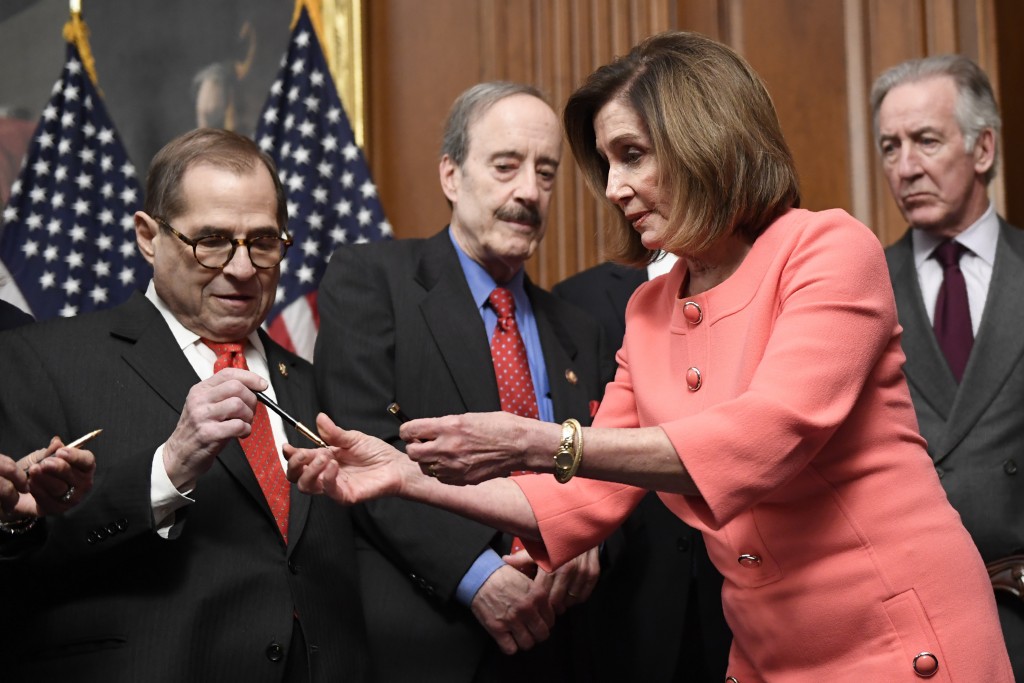 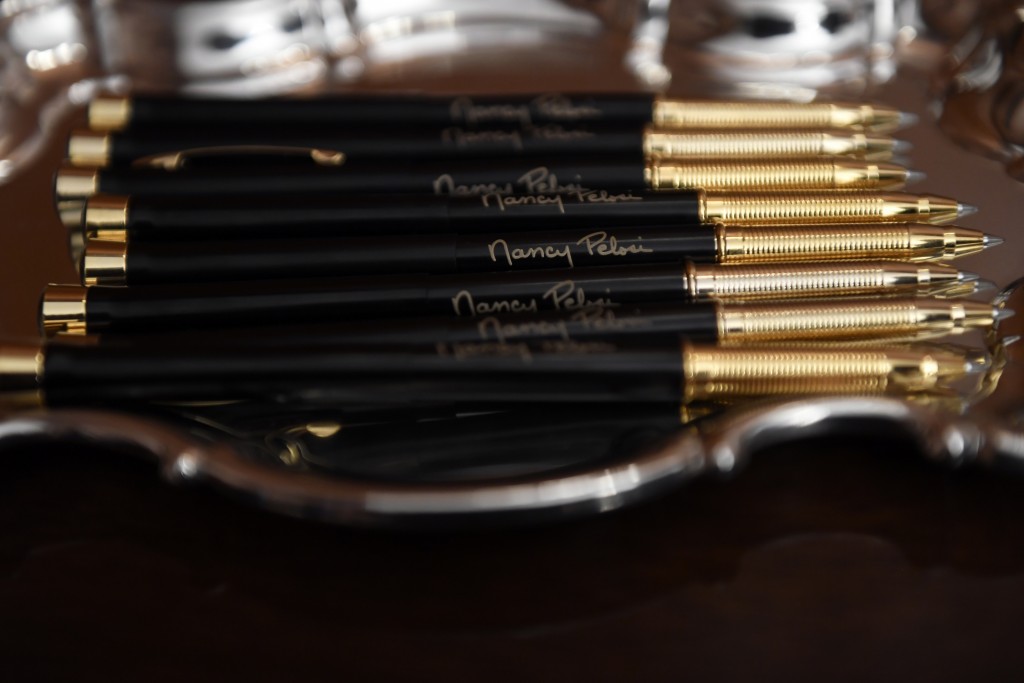 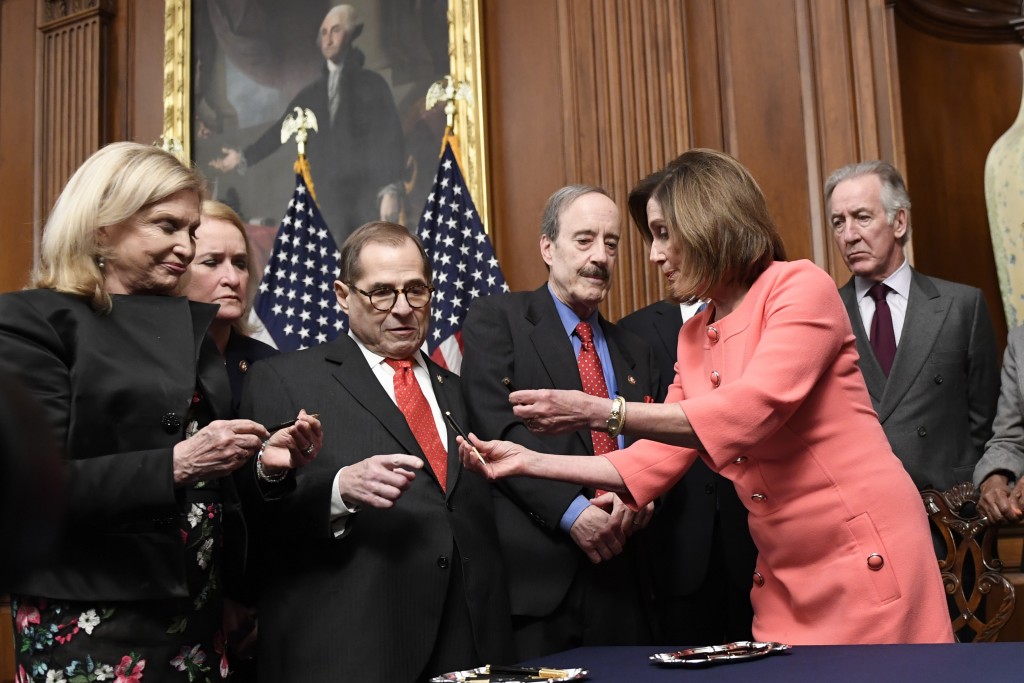 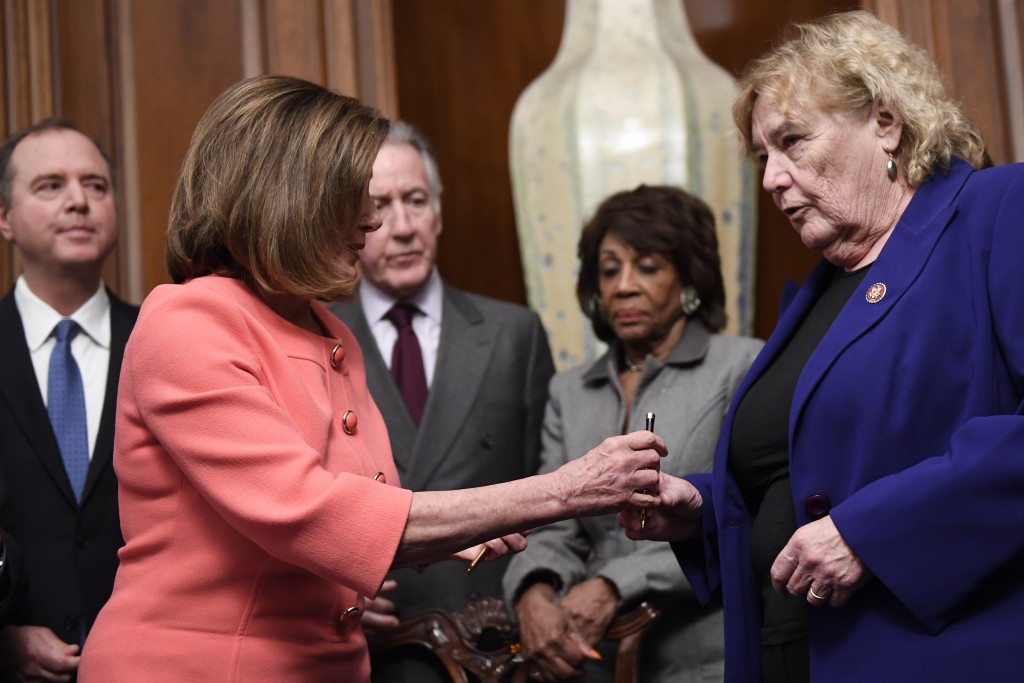 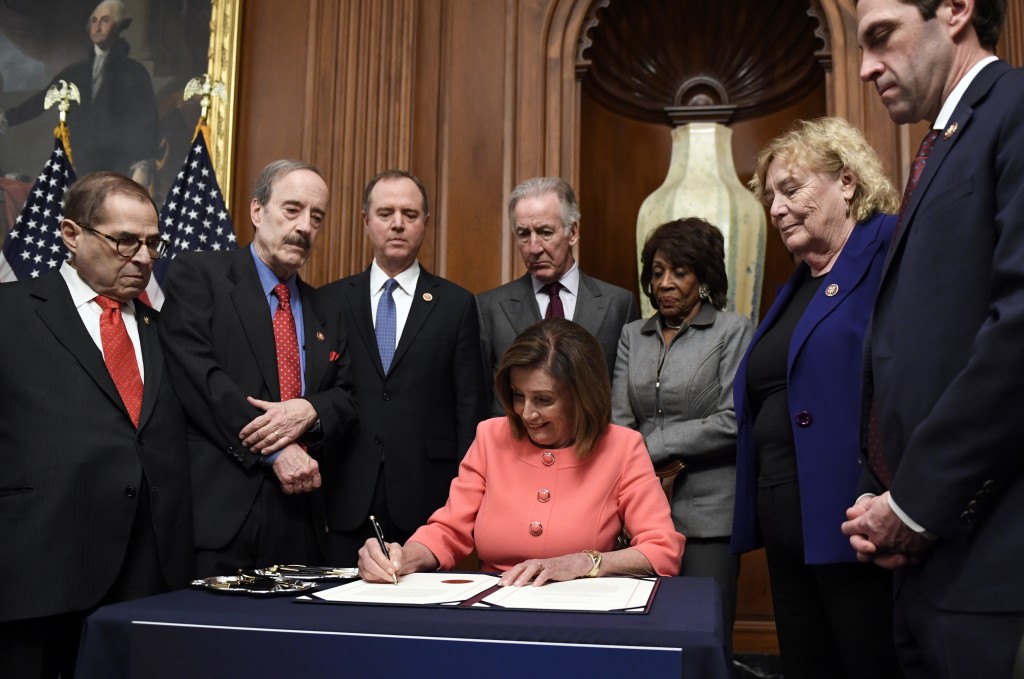 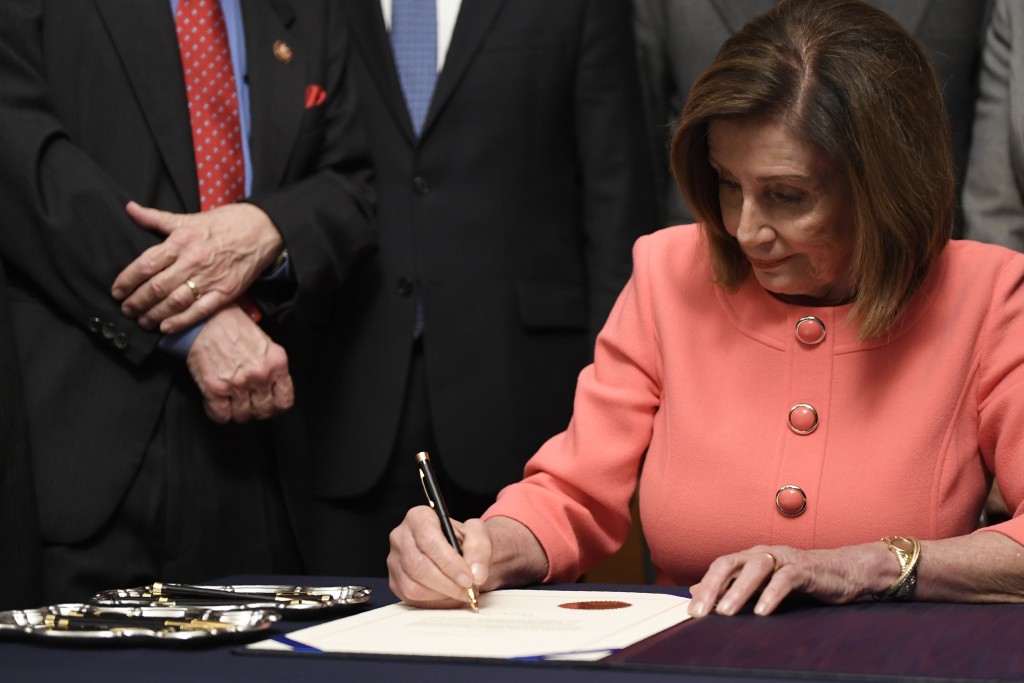 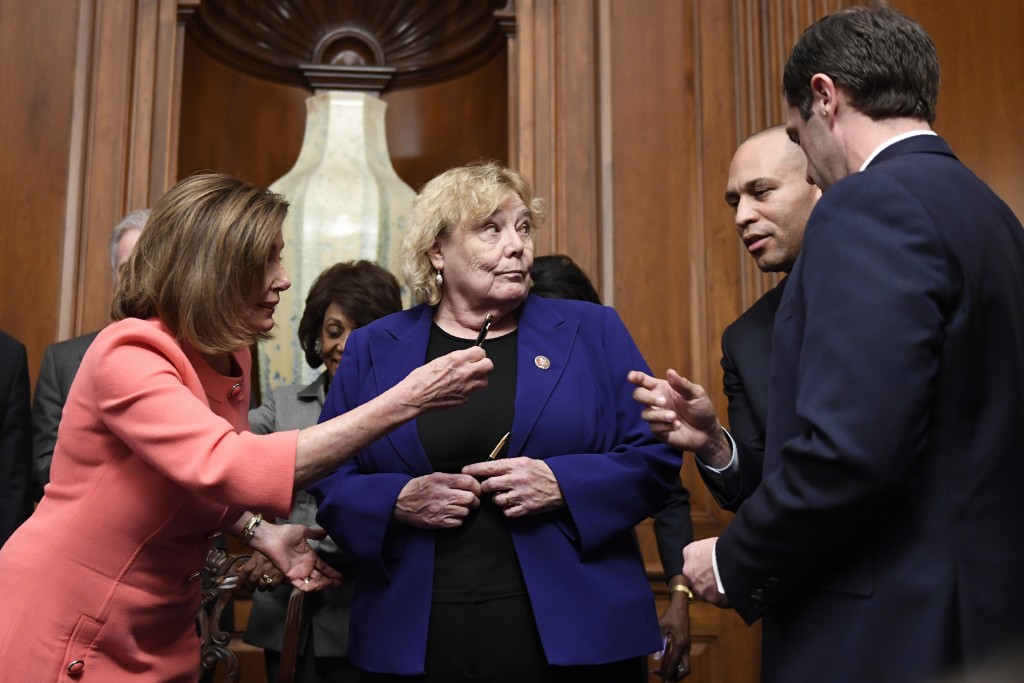 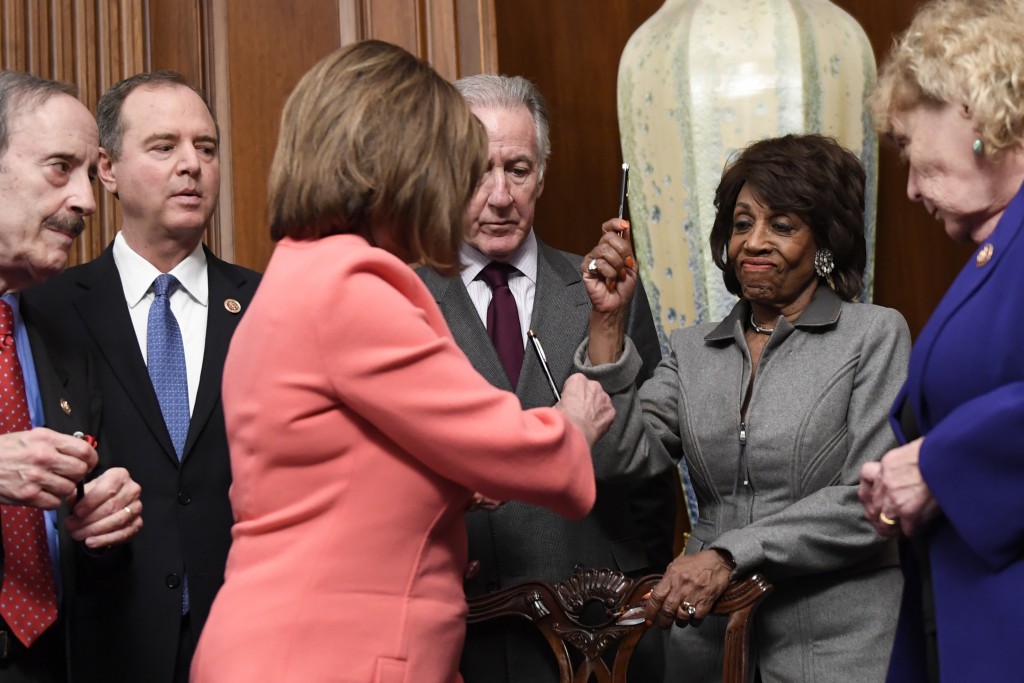 WASHINGTON (AP) — One by one, House Speaker Nancy Pelosi picked up pens lined up beside her and used them to sign a bit of her name on the impeachment articles against President Donald Trump. Then she handed each signing pen to the assembled chairmen and House managers who will prosecute the case in the Senate.

Signing pens are swag in Washington, often framed and hung in lobbies across the city as trophies of proximity to power. Trump has engaged in the tradition himself.

But White House press secretary Stephanie Grisham on Wednesday criticized Pelosi both for the pens and the speaker's demeanor, which got some blowback on social media for being too cheery for such a grave development.

“Nancy Pelosi’s souvenir pens served up on silver platters to sign the sham articles of impeachment,” Grisham tweeted, reposting a photo. Pelosi, she wrote, “was so somber as she gave them away to people like prizes.”

Pelosi's signature sent the articles against Trump to the Senate for trial, which is expected to open Thursday. The House-passed documents charge the president with abuse of power and obstruction of Congress for pressuring Ukraine to help him politically. Trump says the whole thing is a “hoax” and claims he is a victim of a political “witch hunt” led by Pelosi. He is the third president in U.S. history to be impeached.

Before the signing, aides set out two small trays containing more than two dozen black pens emblazoned with Pelosi's signature. She entered the room and sat at a table, the documents and pens before her. Standing around her were the House prosecutors and the committee chairmen who had worked on Trump's impeachment. Pelosi picked up each pen, signed a bit, and handed each one to a lawmaker.

Sometimes, she was smiling.

Trump is familiar with this tradition. In a much-photographed ceremony in June 2018, he signed an executive order halting family separations at the U.S. border. He then handed the pen to Homeland Security Secretary Kirstjen Nielsen.

On December 22, 2017, in the Oval Office, Trump signed the Republican tax bill into law while Congress was in recess. But Trump's aides brought some pens, anyway — so he tried to give them out to reporters . Journalists can't take gifts from the people they cover.

The tradition didn't start with Trump.

President Lyndon Baines Johnson gave away framed sets of the pens he used to sign his “great society” legislation to fight poverty and racial injustice. Among the recipients were lawmakers and the White House press corps. A complete set still resides in the press work space behind the White House briefing room.