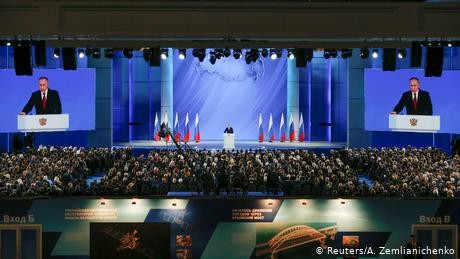 On Wednesday, Russian President Vladimir Putin's state of the nation address was broadcast across the entire country, reaching Russians far and wide. In his speech, Putin announced a fundamental constitutional reform, which could sketch out how he could remain in power beyond 2024, when his term ends.

The announcement came as a surprise, although observers had expected something along these lines for a while. Putin's plans, amplified by Prime Minister Dmitri Medvedev's resignation mere hours after the speech, sent a shock wave through Russia's political establishment.

Parliament to be empowered

Addressing Russia'sFederal Assembly, President Putin said the country had no time to lose. As expected, he then promised to tackle a range of domestic issues in order chiefly raise Russia's birth rate. The real reason behind Putin's urgency, however, is that he is positioning himself to somehow master the "2024 problem" — that is, the question of how he intends to remain in power after his presidential term ends, and despite the constitution's ban on running for office after two 6-year terms.

Putin, pledging to improve Russians' quality of life across a broad range of areas, mentioned his planned constitutional reform and overhaul of the political system almost in passing. In his characteristically Putin-esque manner, he said there was really no need to reform the country's 1993 constitution, yet then continued to propose a number of fundamental changes to the document nevertheless. Putin suggested the populace could sign off on these changes, but avoided speaking of actually holding a referendum. Indeed, Russia has not held such a popular vote in decades.

Putin's plan envisions several fundamental political changes: the Federal Assembly's lower chamber, the State Duma, will gain more powers and be granted the right to appoint the prime minister and government — a privilege that so far rests with the president alone. Putin apparently believes that the State Duma will act in accordance with his own preferences, saying that most of Russia's parties were "patriotic" — or in other words loyal to the Kremlin. At the same time, the president unequivocally ruled out Russia becoming a parliamentary republic.

Read more: A fact check of Putin's promises, 20 years on

Putin also suggested that future presidential candidates ought to have at least spent the past 25 years living in Russia and must be citizens of no other country. By making these suggestions, Putin was clearly aiming to bar exiled opposition figures such as Mikhail Khodorkovsky from running for the presidency. Putin also proposed that ministers and lawmakers should only have Russian citizenship, allegedly to avoid being blackmailed by the West through sanctions. Finally, in what could be read as an anti-Western move, he recommended that the constitution be amended to enshrine the primacy of Russian law over international law.

These changes provide Putin with two possible pathways to power. He could, as between 2008 and 2012, serve as prime minister. Alternatively, he could have himself elected as the head of the State Council, which Putin plans to equip with more power. Whatever he chooses, it is certain that Putin does not plan to give up power any time soon.

A new political chapter has begun for him, and for Russia as well. And even though the year 2024 seems far off, Putin does not have much time left to make his changes reality. In 2021, Russia will hold parliamentary elections and he is keen to see his far-reaching proposals implemented by then. For now, he is in a strong position to cement his hold on power for many years to come.