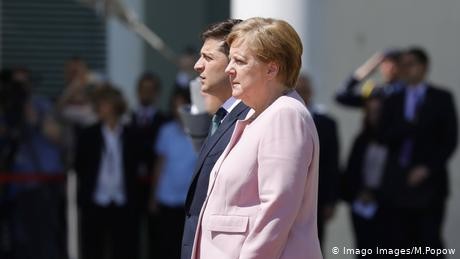 Ukraine's President Volodymyr Zelenskiy on Wednesday asked Germany to help get justice for the victims aboard the passenger plane mistakenly shot down by Iran days earlier.

Zelenskiy in a phone call with Chancellor Angela Merkel on Wednesday discussed the aircraft's downing that killed all 176 passengers and crew, and thanked Germany for its support and willingness to contribute to a transparent investigation.

"The Ukrainian head of state expects an effective investigation and prosecution of those responsible for the crash of the Ukraine airline flight, as well as compensations for the victims' families and the carrier," his office said.

"The president of Ukraine called on Germany to contribute politically contribute to this process," they added.

Merkel expressed her condolences over the tragedy, according to the statement.

The Ukrainian government has already pledged to pay 200,000 hryvnia (€7,472, €8,332) to the families of the victims in the coming days. However, Zelenskiy said he wanted Iran to compensate the victims.

According to Wednesday's statement, Ukrainian specialists are still working in Iran, dealing with identification of bodies and examining the recovered black boxes.

Iran has pledged to punish those responsible and several people have already been arrested.

While speaking with Merkel, Zelenskiy also thanked Germany for mediating in the gas dispute with Russia. In turn, Angela Merkel said the next step would be to invest into Ukraine's gas transit system to make it more competitive.