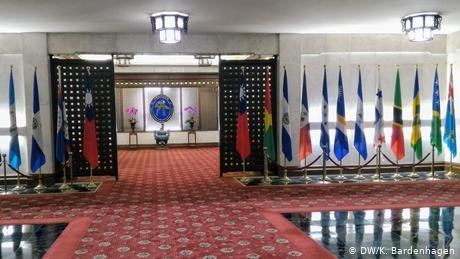 Just like those of the local elections last November in Hong Kong, the results of the polls in Taiwan have sent a clear message to Beijing. Tsai Ing-wen, the incumbent president who has been vocal in her criticism of Beijing, garnered 57% of the votes, winning a clear majority for a second term. Her pro-mainland rival Han Kuo-yu only secured 35%. Tsai's Democratic Progressive Party (DPP) also won a majority in the parliamentary elections that took place at the same time.

The events in Hong Kong certainly helped. For months, people have taken to the streets there to demonstrate against Beijing's growing influence, as well as the city-state's economic and social problems.

'One country, two systems' for Taiwan too?

Beijing has said that it would like to govern Taiwan along the same "One country, two systems" principle that it uses for Hong Kong, i.e. Taiwan should get closer to China but maintain a large amount of autonomy. For Taipei, even more than for Hong Kong, this would represent a big step backwards.

Beijing considers Taiwan a renegade province. And since China has become so powerful hardly a country in the world now recognizes Taiwan as an independent state.

Yet, as the Republic of China, it has been governed autonomously since 1949 and it has its own army and currency. It only became a democracy with rule of law in the western sense at the end of the 1980s.

The generation of 20- to 34-year-olds, the first to grow up in a democracy, is particularly fearful of losing its freedom. In 2014, they launched the "Sunflower Movement," which has had a big impact on the protests in Hong Kong.

Read more: A slap in the face for Beijing

The fact that Chinese President Xi Jinping, echoing comments made at the pompous military parade to celebrate the 70th anniversary of the People's Republic last October, said in his new year's speech that issues such as Taiwan's absorption into China could not be "passed on from generation to generation” and that Chinese state media have remarked that "reunification cannot be stopped by any force or anyone." All this has raised concerns in Taiwan.

Commenting on the election results, Chinese foreign ministry spokesman Geng Shuan recently said: "Regardless of what happens in Taiwan, the basic facts won't change: there is only one China in the world and Taiwan is part of China." He is probably right. Without international support, Taiwan cannot do much. Only 15 states, the most important of which is the Vatican, maintain diplomatic relations with Taiwan and the number that recognizes it as an independent state continues to decrease.

The Chinese government believes that it has time on its side and this is probably also true for the moment. A recent commentary published by the Chinese state news agency Xinhua stated: "This temporary countercurrent is just a bubble under the tide of the times. The basic pattern of cross-Strait relations will not change because of an election." This is wishful thinking. Despite the lack of international support, it is unlikely that Taiwanese citizens will give up their desires for freedom.

The elections in Taiwan were not only about the state's geopolitical status and its relationship with Beijing, however. A rise in unemployment, stagnant wages, pension cuts and a tax system that benefits the rich above all have all helped to fuel the population's dissatisfaction. This is also why President Tsai Ing-wen suffered a major defeat in local elections one year ago. The dilemma is that the more conflict there is between Taipei and Beijing the less opportunity there is to benefit from the mainland's economic successes. In future, Taiwan's president will have to find a balance between economic chances and the desire for freedom.

Taiwan's economy may have grown last year and is expected to grow again, but this can partly be attributed to the benefits from the trade dispute between Washington and Beijing, which boosted Taiwan's exports to the US. The situation could change now that the US and China have reached an agreement. Other problems include the fact that Taiwan's working population is getting older, the economy is based on very few markets and the island state's limited portfolio of products. Over half of Taiwan's exports go to China, Hong Kong and the US. Moreover, China is now producing better products, especially in the tech sector, which has always been important for Taiwan, so competition is increasingly tough. Furthermore, Taiwan is also closely connected to China in the global supply chains: Beijing can easily harm Taipei by putting pressure on other countries not to conduct trade with Taiwan or by restricting visits from the mainland which would have a negative impact on tourism, which has become an important sector.

To counter such a scenario, the president will continue to build up relations with other states, especially those in southeast Asia; for example she is committed to joining the Comprehensive and Progressive Agreement for Trans-Pacific Partnership. After the election, she received representatives from the US and Japan. In her acceptance speech, she said that "the Republic of China (Taiwan) is an indispensable member of the international community. We are willing to work together with all countries to take on shared responsibility, take part in shared prosperity, and help maintain regional peace and stability. All countries should consider Taiwan a partner, not an issue." This too might have been wishful thinking. The fragile status quo will only change if several powerful states decide to recognize Taiwan as an independent state. Only a handful of heads of state congratulated her on her election victory. German Chancellor Angela Merkel was not one of them.

As long as China's economy is as powerful as it is and Beijing continues to push its "One China policy," the island's isolation will continue. However, China will only resort to dramatic measures or intervene militarily if Taipei oversteps Beijing's red line and officially declares independence. No ruling party in Taiwan has ever dared to do this. This is not likely to happen under Tsai Ing-wen even though she is an outspoken critic of Beijing. Whether the Taiwanese population likes it or not, it is Beijing that decides on the boundaries of democratic freedom in Taiwan.