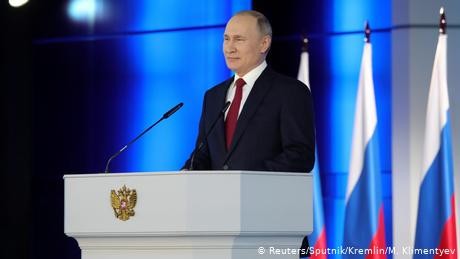 Russian President Vladimir Putin proposed changing the constitution to give parliament more power, adding that a referendum should be held to approve the changes.

"I consider it necessary to conduct a vote by the country's citizens on an entire package of proposed amendments to the country's constitution," Putin said in an annual address to lawmakers on Wednesday.

He did not specify a timeline or date for the referendum.

The constitutional amendments would give parliament the power to pick Russia's prime minister and cabinet ministers. That power currently lies with the president.

Political changes ahead of term end

Putin added that he did not want to change Russia's strong presidential system. He also said he wanted to tighten the criteria for candidates who want to run for president.

Analysts were watching Putin's speech closely for indications about possible changes to Russia's political system ahead of 2024, when Putin's term ends.

The constitution currently limits presidents to two terms, requiring him to step down.

Observers have speculated that Putin may try to stay in power by shifting into the prime minister's seat among other moves.

Putin has been at the helm in Russia for over 20 years — longer than any other Russian or Soviet leader since Josef Stalin.

"This is about the future," he said.

He proposed giving more subsidies for low-income families with children up to 7-years-old. Support was previously capped-off at for children under 3-years-old.

Russia's population is currently estimated to be 147 million, with the fertility rate expected to go down to 1.7 births per woman by 2024.