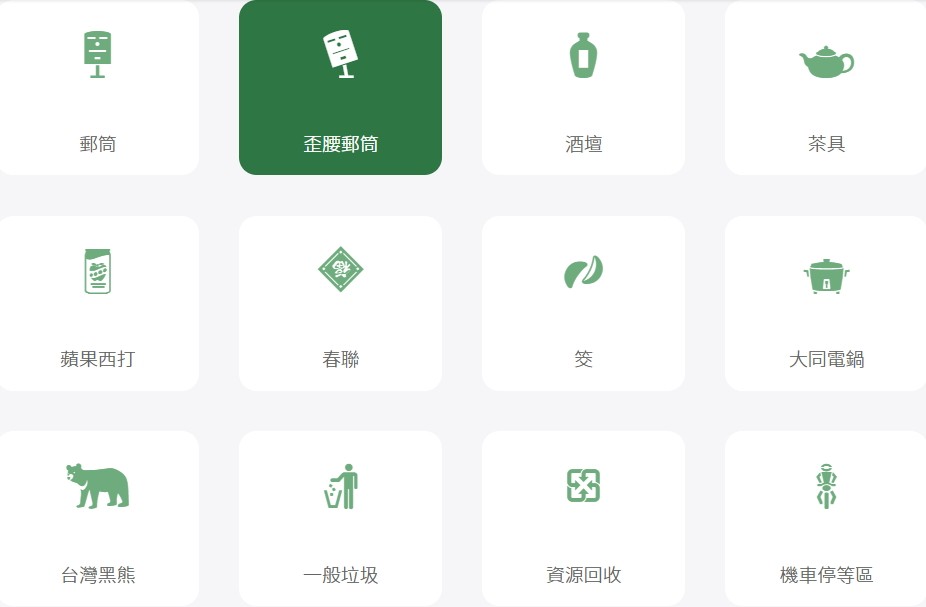 TAIPEI (Taiwan News) — Two foreign designers in love with Taiwan have jointly created more than 100 icons bearing Taiwanese elements as a way to demonstrate their support for the island country they now call home.

Japanese designer Holoko, who has lived in Tainan since June 2019, and British computer programmer Rob, embarked on the “Taiwan Icon Font” project to back the campaign of “Stand by Taiwan” – a slogan came up with by Taiwan-born Japanese critic and political activist Birei Kin (金美齡), according to the project’s official website.

The icons, appearing in green against a white backdrop, feature a variety of cultural characteristics of Taiwan. They include tourist attractions like the National Palace Museum and Taipei 101, indigenous species such as the Formosan black bear, and ordinary objects in people’s everyday lives – for example the “bent postboxes” caused by a typhoon in 2015 but surprisingly shot to fame as people flocked to take goofy photos with them.

The designers expressed their affection with the island and the warm ties between Taiwan and Japan. In addition to the pearl tea craze and the record high number of Japanese visitors to Taiwan, an introduction on the website says “Japanese will always be grateful to Taiwan for its generous donations during the 2011 Tōhoku earthquake and tsunami."

Through the project, they wish to introduce Taiwan to a greater international audience and help drive local tourism for the charismatic island. “We’re supporting the freedoms and dignity Taiwan deserves,” they said, “and we wish Taiwanese people will be able to live the way it is.” The icons are free to download.