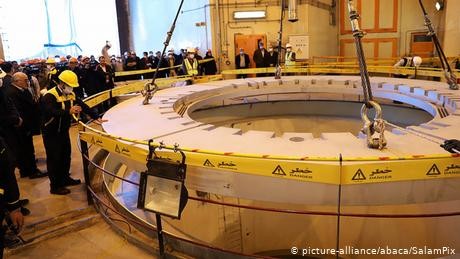 European leaders launched the Iran nuclear deal's dispute mechanism on Tuesday over Tehran's failure to adhere to limits outlined under the 2015 accord.

Germany, France and the UK issued a joint statement announcing the move, saying that they were "left with no choice" but to trigger the dispute mechanism and "register our concerns that Iran is not meeting its commitments."

The three European powers noted that the decision does not mean they are joining in US President Donald Trump's "maximum pressure" campaign against Iran — leaving a door open for diplomacy.

"Given recent events, it is all the more important that we do not add a nuclear proliferation crisis to the current escalation threatening the whole region," they said.

Iran announced on January 6 that it would no longer adhere to limits on enriching uranium that are outlined under the deal, although Tehran said it would continue cooperating with the United Nations' nuclear watchdog. The move came after the US killed top Iranian general Qassem Soleimani in an airstrike in Baghdad.

Read more: What is the Iran nuclear deal?

Germany: Violations 'could not go unanswered'

"Our goal is clear. We want to preserve the accord and reach a diplomatic solution within the deal," Maas wrote on Twitter. "We call on Iran to constructively take part in the negotiation process that is starting now."

The European Union's foreign policy chief Josep Borrell, who will be overseeing the dispute process, called on Tehran to discuss nuclear issues "in good faith." adding that preserving the nuclear deal "is now more important than ever."

Earlier on Tuesday, British Prime Minister Boris Johnson floated the idea of having a "Trump deal" to replace the current accord, saying that it would provide a "way forward." The remarks directly contradict the joint German-French-British statement, which called for all efforts to preserve the current agreement.

How does the dispute process work?

The clock is now ticking for the deal's signatories to resolve problems, with Iran facing the prospect of renewed sanctions should an agreement not be reached.

Ministers from each country now have two weeks to find a solution — although that time could be extended if all sides agree. If an extension is called for, an advisory board would then have an extra 20 days to adjudicate the issue.

If no solution is found, the process could ultimately lead to the reimposition of UN sanctions that were in place before the deal.

Why are they triggering it now?

Iran's latest decision to no longer abide by the deal's limits prompted European leaders to act, although Tehran has been gradually reducing compliance since the US pulled out of the agreement.

Germany, France, the UK and the EU signed the Joint Comprehensive Plan of Action (JCPOA) in 2015 along with the United States, Russia and China. Trump unilaterally withdrew from the agreement in 2018, reimposing US sanctions. The result largely limited the economic benefits promised to Iran under the deal in exchange for limiting its nuclear program.

The European signatories of the deal have been trying to save the accord, but have not yet been able to counteract the impact of US sanctions.