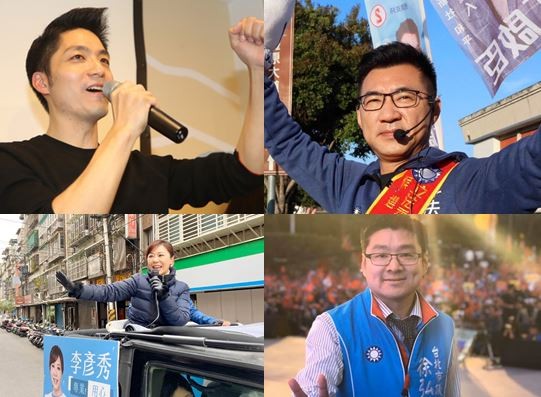 TAIPEI (Taiwan News) — After their party's defeat in Taiwan's general elections, the Kuomintang (KMT) party's younger members have begun questioning the party's core values while calling for the redistribution of power between the older and younger generations within the party ranks.

The critics emerged after KMT Chairman Wu Den-yih (吳敦義) announced that he would let the party's Central Standing Committee decide whether to accept his resignation as a way of accepting responsibility for the party’s rout in the elections, leaving a chance that he would retain his position.

In response, several members of the Central Standing Committee, including newly elected legislators Johnny Chiang (江啟臣), 47, and Wayne Chiang (蔣萬安), 41, have announced their resignation from the committee and demanded reform of the party's decision-making process.

In a Facebook announcement, Johnny Chiang questioned why voters no longer have trust in the KMT and why the party has lost its connection with the younger generation. He said he believed all committee members should resign on Wednesday and establish a temporary committee composed of local magistrates, local council speakers, and representatives from the Legislative Yuan's KMT caucus.

KMT legislator Lee Yen-hsiu (李彥秀), 48, who lost her re-election, agreed with Chiang in a Facebook post. She expressed her belief that as an opposition party, the KMT should centralize the decision-making process based on the interest of the legislative caucus, letting it lead the conversation on the party's policies instead of the Central Standing Committee.

She then questioned whether the KMT should stick with its position on the "1992 Consensus" with the Chinese government, as this term has become stigmatized and linked to China's failed “one country, two systems” framework by the Democratic Progressive Party (DPP). If the KMT cannot deliver a cross-strait policy based on Taiwan-centric identity, she warned that it will only be sidelined from the mainstream within the young generation.

Finally, Lee admitted that the current KMT has no room for young professionals with political aspirations to earn a living while fulfilling their vision in the party. She believes that while the DPP has systematized the hiring and training of young politicians, its younger members still worry about losing their jobs after the election.