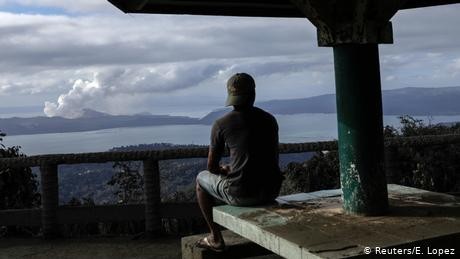 Philippine authorities on Tuesday warned residents not to return to their homes in the vicinity of the Taal Volcano, which, after days of spewing fire and ash, has yet to erupt.

"Residents cannot return yet because there is still danger," head of the Philippine Institute of Volcanology and Seismology (PHIVOLCS) Renato Solidum said.

The volcano in Batangas provice, 66 kilometers (40 miles) south of the Philippine capital of Manila, in the past has been known to spew ash and lava for months before exploding, the volcano expert explained.

An ash plume shot from the volcano on Sunday evening, reaching heights of 10 to 15 kilometers into the atmosphere before blanketing the region in heavy, volcanic ash. The volcano began spewing lava on Monday.

Over 24,000 people were evacuated from the volcanic island and its surroundings in recent days, leaving behind pets and livestock in the process. As many as 200,000 people could eventually be forced to flee.

DW's Ana Santos reporting from Batangas said that residents are facing the prospect of staying in evacuation centers "for an indefinite period of time."

Meanwhile, some evacuees have ignored official warnings and returned to check on their homes and livestock.

While reports of the ground swelling and breaking indicate an accumulation of magma — a sign that an explosion could be imminent — no one can say for sure when the volcano will erupt, Santos said.

"For now, it is still a pressure cooker that people are anxiously monitoring."

The risk of explosion remains at alert level four, the second-highest level, signifying that a "hazardous explosive eruption is possible within hours to days," PHIVOLCS said.

The institute warned people away from entering the danger zone around the volcano due to the risk posed by "pyroclastic density currents", dangerous air currents made up of hot ash, lava fragments, and gas. Such currents have been known to incinerate everything on their path.

Read more: Volcanoes and Earthquakes: The Pacific Ring of Fire

Other dangers include the risk of landslides or that part of the volcano will collapse into the lake surrounding it, causing a tsunami, PHIVOLCS said.

The danger warning could remain in effect for weeks, depending on how the situation develops.

Taal is one of the most active volcanoes in the island country located on the Pacific "Ring of Fire", where the Earth's tectonic plates collide, although it has not had a major eruption since 1977. A catastrophic eruption in 1911 claimed 1,335 lives