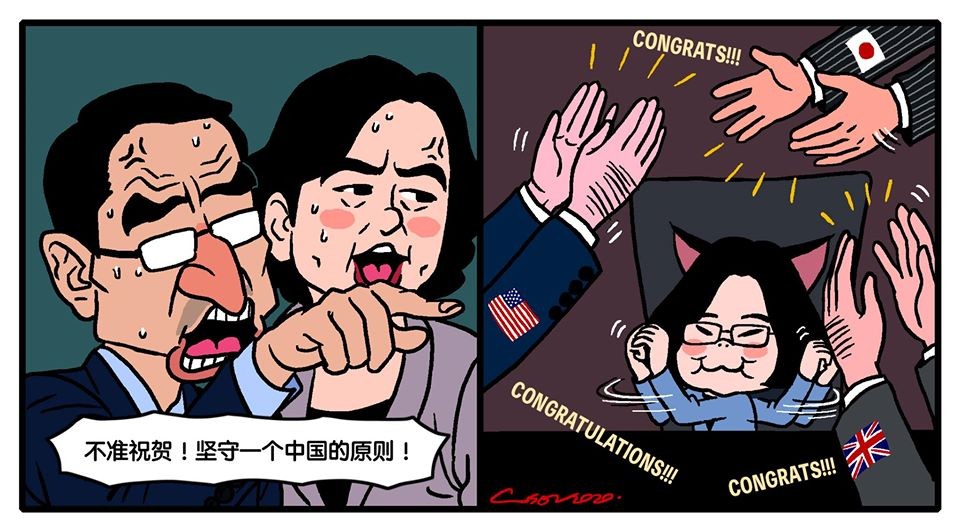 After more than 60 countries sent messages of congratulations to Tsai following her landslide victory in the 2020 election, China had sour grapes, warning of moves toward "Taiwan independence," and cried foul, claiming that their actions violated the "one China principle."

When asked to respond on Sunday (Jan. 12) to the greetings sent by senior officials from countries such as the U.S., the U.K., and Japan, Communist China's Foreign Ministry Spokesman Geng Shuang (耿爽) used the diminutive term "Taiwan region" to refer to the country and said the matter was a "sub-national affair in China." He then said the communist regime "firmly opposes those countries’ violation of the 'one-China principle'" by offering congratulations and "lodging solemn representations."

On Monday morning (Jan. 13), to mock Communist China's bitter cries of foul play and to show Hong Kong's solidarity with Taiwan, Lo uploaded an illustration depicting Geng and fellow Foreign Ministry spokeswoman Hua Chunying (華春瑩) in the frame on the left frantically screaming, "You're not allowed to congratulate! Abide by the 'one China principle!'" In the frame on the right, Tsai can be seen wearing cat ears and smiling as she clasps her hands to express thanks to leaders from the U.S., Japan, and the U.K. for congratulating her.

The top comment below the Facebook post read: "The woman in heat wails, the man is not sexually satisfied." The author of the comment made a play with words and used Hua's first name Chun (春) to convey the equivalent to sexual caterwaul (叫春), and took Geng's first name Shuang (爽) to have the meaning of not sexually satisfied, or in a bad mood (不爽).

Below his post, the Facebook follower added another meme showing Geng on the left looking at a pile of propaganda slogans and saying, "We've already used that one before." On the right, Hua is seen wearing a dress and crudely squatting over a pile of signs saying, "How about using this sentence this time?"

Another follower posted a meme showing a dozen photos of Tsai laughing hysterically. By 10 p.m. that evening Reddit user Charlie_Yu posted the illustration with the title, "China just memed themselves," quickly gaining the post 365 upvotes within 24 hours.