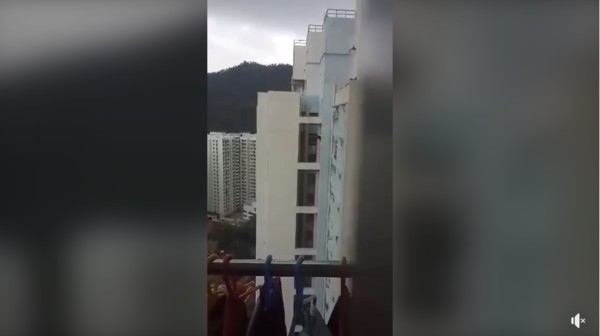 TAIPEI (Taiwan News) — A suspicious video surfaced on Monday (Jan. 13) of a man who appears to be shoved out of the window of a high-rise apartment in Hong Kong.

At 8:42 a.m. on Monday morning, a security guard spotted the body of a man who had apparently taken a fatal fall from the Ko Cheung Court high-rise apartment in Hong Kong's Yau Tong area, reported Sing Tao Daily. Paramedics who arrived on the scene confirmed he had serious injuries and was dead.

The man was 34 years old, unemployed, was not a resident of the complex, and lived with his father in Kowloon Bay District, according to the report. Police are investigating his fall from the window, which they do not believe to be an accident.

At 4:12 p.m. that afternoon, the Twitter account of the Hong Kong activist group Demosistō (香港眾志) posted video taken by a neighbor showing a man jutting out of a window head first and motionless, possibly in an unconscious state. Next, a figure appears to lean over the man and push his body forward, causing him to plunge straight down, horrifying the woman shooting the video.

That someone appeared to push the man and his body seemed completely limp when it exited the window arose great suspicion among netizens. When posting the video, Demosistō pointed out there have been many mysterious "suicides" among young people since the pro-democracy protests broke out in Hong Kong last summer and sarcastically wrote: "Here is how a 'suicide' happens."

However, at 8:42 p.m. that night, Hong Kong police issued a statement on Facebook and suggested the man may have been alone. Police say that witnesses at the scene saw the man follow other residents as he entered one of the apartment blocks through the main door and took the elevator to the 29th floor alone.

Police believe the man then jumped out the window of a staircase between the 29th and 30th floors. Investigators claimed there were no signs of "fighting, struggle or suspicious sounds observed" from the time he left the elevator to the moment he jumped.

They added the windows at the scene were 90 centimeters wide and 1.5 meters above the ground. The statement added there was one shoe print found on the wall next to the window. Police said that an investigative team from Kwun Tong District was currently investigating the case as a "suicide."

The statement then closed by condemning those who intentionally spread "fake information" and sought to smear the police for "pushing the deceased off the building." It then called on such "ill-intentioned people" to respect the fallen man and his family members, and "stop all groundless speculation and accusations."

Ever since the outbreak of #hongkongprotests, dead bodies have been mysteriously found everywhere. Time and again, #hkpolice claimed they are just “suicides". Here is how a “suicide” happens. #HKPoliceState #HumanRights #PoliceBrutality pic.twitter.com/u2RCUgAbjp