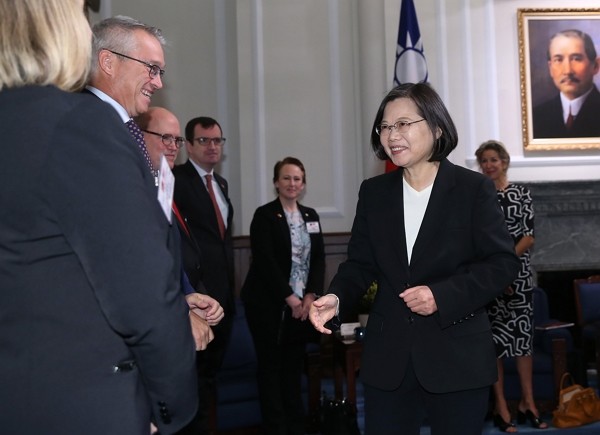 President Tsai Ing-wen (蔡英文) on Monday (Jan. 13) pushed the idea of a trade agreement between Taiwan and the United States and its potential economic benefits to a visiting delegation from the American Enterprise Institute (AEI), an American think tank.

Two days after winning election to a second term, Tsai thanked the AEI members for coming to Taiwan to observe Saturday's elections and for their focus on democracy and the Indo-Pacific strategy.

"Relations between Taiwan and the United States are the best they have ever been thanks to our joint efforts over the past three years," Tsai said.

Last year, a number of U.S. multinationals increased their investment in Taiwan, Tsai said, and she suggested that signing a bilateral trade deal would lead to further economic and bilateral trade growth.

Tsai, who has pushed for a trade deal with the U.S. to visitors on several occasions during her first term, said Taiwan would continue to move toward that goal.

Meanwhile, she expressed concern to delegation members from Australia over recent bushfire damage to the country's Gondwana rainforests, calling it a very sad situation, and she offered any assistance that may be needed.

Tsai said Taiwan, the U.S. and Australia are steadfast partners in the Indo-Pacific region, having cooperated closely over the past three years.

Taiwan will continue to make an even greater contribution to the region, she said, particularly in the areas of disaster prevention and relief, humanitarian assistance, women's empowerment, and the digital economy.

She also said Taiwan looked forward to working with like-minded countries to boost exchanges on such issues as media literacy, democratic literacy, and mechanisms to defend democracy.