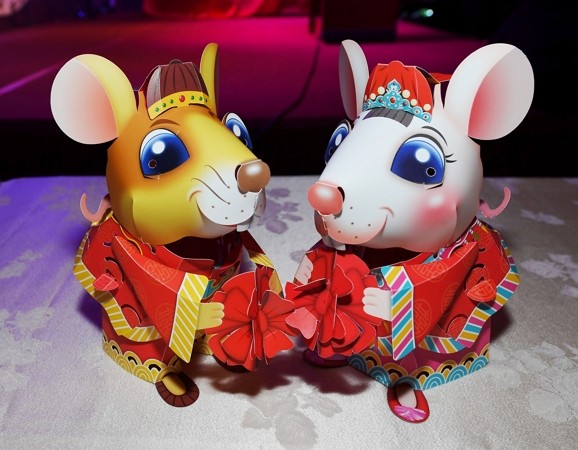 TAIPEI (Taiwan News) — The Tourism Bureau released its annual hand lanterns during a press conference at the Grand Hotel Taipei on Monday (Jan. 13) and announced they will be given away for free at the 2020 Taiwan Lantern Festival in Taichung.

Designed by lantern specialist Lin Chia-wei (林佳葦), the lanterns were based on the images of rats, representing the zodiac animal for this year. The rat lanterns, which bearers can assemble themselves, not only catch the eye but also bow to congratulate one another on the arrival of the Lunar New Year holiday, reported CNA.

The daughter of Taiwanese lantern expert Lin Jianer (林健兒), Lin said that the married rodent couple she created was inspired by the famous Chinese folktale "The Mouse Bride." She said that she found the story interesting, as many Taiwanese households still follow the tradition of placing grains of rice and pastries by the wall during the holidays to send blessings to the newlyweds.

Transportation Minister Lin Chia-lung (林佳龍) said that the hand lanterns will be available to the public from Feb. 8 – Feb. 23 at the Lantern Festival. He added that the Taiwanese government had invested more resources in this year's event than the past, reported UDN.

The Tourism Bureau pointed out that the creative team for the 2020 Lantern Festival, which includes internationally renowned designer Lin Shuen-long (林舜龍), has set up its lanterns in natural settings and that visitors will have the chance to "engage in conversations with the trees and the flowers." The bureau added that many details went into the construction of the venue and that all are welcome to witness the masterpieces.