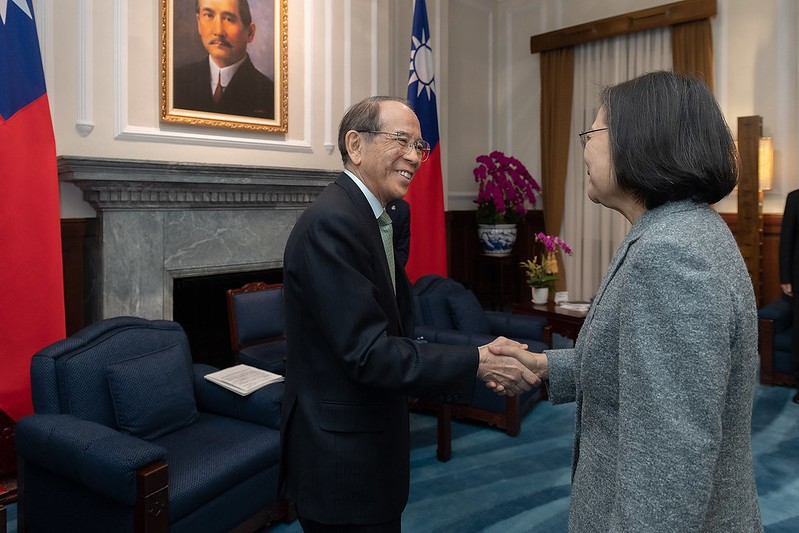 Taiwan President Tsai Ing-wen (蔡英文) met with the visiting chairman of the Japan-Taiwan Exchange Association (JTEA) on Sunday and expressed hopes for enhanced exchanges and closer cooperation with Japan in the areas of trade, culture and sports.

During the meeting, Mitsuo Ohashi congratulated Tsai on her election to a second term the previous day and extended condolences to the families of the eight military officers who died in a military helicopter crash in New Taipei on Jan. 2.

Ohashi also said he wished the five survivors of the crash a quick recovery.

JTEA is an organization that represents the interests of Japan in Taiwan in the absence of diplomatic ties.

Noting that Tsai will start her second term in May, Ohashi said the next four years will be a crucial period for Taiwan and he hopes Tsai leadership will continue to boost the development of Taiwan, Asia and even the world.

He thanked Tsai for meeting with him so soon after the election, amid her busy schedule. This showed the importance Taiwan attaches to its relationship with Japan, Ohashi told Tsai, who was elected to a second term Saturday with a record-breaking 8.17 million votes.

In addition to the victory in the presidential race, the ruling Democratic Progressive Party also retained its majority in the Legislature, which will help Tsai to implement her administrative policies and advance Taiwan's development, Ohashi said.

In turn, Tsai noted that her last meeting with Ohashi was two months ago, and she said she was pleased to be holding talks with him again the day after her reelection.

Ohashi's visit was an indication of the good relations between Taiwan and Japan, Tsai said.

The results of Saturday's presidential election were indicative of the Taiwan people's resolve to safeguard their country's sovereignty, democracy and freedom, Tsai said.

She said Taiwan will continue to work with like-minded countries to deepen its democracy.

As a responsible member of the international community, Taiwan over the past three years has been adhering to the principles of not succumbing to pressure from China, not provoking Beijing and not precipitately advance relations with China, so as to maintain stability across the Taiwan Strait, Tsai said.

Taiwan will remain consistent in that regard and will strengthen its partnerships with other countries in Asia to promote prosperous development of the region, she added.

Japan is an important partner in the areas of diplomacy cooperation and tourism, Tsai said, noting that visitor arrivals from Japan reached a record 2 million last year.

In 2020, Taiwan hopes to expand its exchanges with Japan in various fields, including trade, sports and culture, Tsai said.

Late Saturday night, after her landslide victory in the presidential election, Tsai tweeted in Japanese that she would humbly listen to the voice of the people, work tirelessly to overcome difficulties, and deepen relations between Taiwan and Japan.

On Sunday, Sankei Shimbun reported that the Japanese government will continue to collaborate with Taiwan, which it deems an important partner with shared core values.