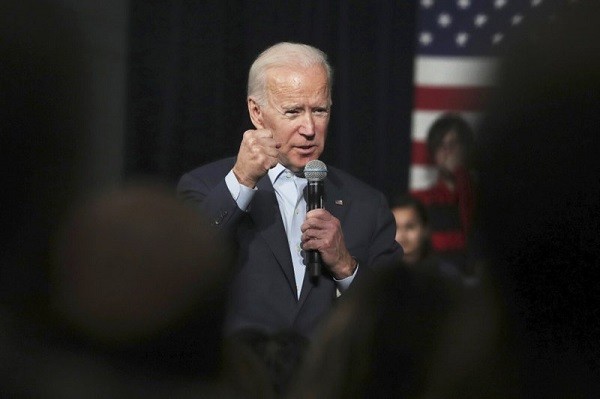 Joe Biden, a former vice president of the United States and Democratic Party aspirant for the presidency in 2020, called for stronger ties with Taiwan in a tweet Saturday congratulating President Tsai Ing-wen (蔡英文) on her election victory.

"Congratulations to President Tsai and the people of Taiwan for another successful election," wrote Biden, saying: "You are stronger because of your free and open society. The United States should continue strengthening our ties with Taiwan and other like-minded democracies," he tweeted.

In Taiwan's presidential election on Jan. 11, Tsai of the Democratic Progressive Party beat her two rivals, the Kuomintang's Han Kuo-yu (韓國瑜) and James Soong (宋楚瑜) of the People First Party (PFP), with a record 8.17 million votes, or 57.13 percent of the valid ballots cast.

Tsai's vote total was the highest ever recorded for any candidate in a presidential election in Taiwan, breaking the previous high of 7.66 million votes received by Ma Ying-jeou (馬英九) in the 2008 election. The voter turnout for the presidential race was 74.9 percent. The victory has been attributed to Tsai's firm stance on defending Taiwan's sovereignty and democratic system from Chinese encroachment.

Many U.S. officials and congressmen also congratulated Tsai on her victory, including Clark Cooper, assistant secretary of state for political-military affairs. "The free and fair elections in #Taiwan is #democracy in action," Cooper said on his Twitter page.

He also retweeted Secretary of State Mike Pompeo's congratulatory statement, in which Pompeo praised Taiwan for having once again demonstrated the strength of its robust democratic system through the Jan. 11 election. Expressing thanks for Tsai's leadership in developing a strong U.S.-Taiwan partnership, Pompeo lauded Tsai for seeking stability with China "in the face of unrelenting pressure."

Meanwhile, Republican Senator Cory Gardner, chairman of the Senate Foreign Relations Subcommittee on East Asia, the Pacific, and International Cybersecurity Policy, extended his "warmest congratulations" to Tsai on winning a second presidential term. In a statement Gardner said he was honored to host Tsai in Denver last year, and "it's been a privilege working closely with her to advance the friendship between our nations during my multiple visits to Taipei."

"As China continues its aggressive campaign to delegitimize Taiwan, it's critically important for the United States to reaffirm our support for Taiwan's resilient and vibrant democracy, and to further grow the bonds of friendship between the people of Taiwan and the United States," he added.

Jim Risch, chairman of the Senate Foreign Relations Committee, tweeted on the committee's official Twitter page his congratulations to Taiwanese people for holding another successful democratic election, and to Tsai on her victory. "The United States values our important partnership with Taiwan," he wrote.

Menendez lauded the democratic system in Taiwan as an inspiration for those who strive for the freedom of speech and assembly, the rule of law and respect for human rights around the world. He said he looks forward to working with Tsai in efforts to strengthen the links between American and Taiwanese people in the years ahead, while Rubio said he looks forward to strengthening U.S.-Taiwan relations in years to come.

McCaul tweeted that the people of Taiwan have spoken loud and clear once again -- they will defend their democracy against Chinese Communist Party (CCP) coercion. "The U.S. stands with them," he said.

Calling Tsai a champion of freedom, Yoho said he looks forward to strengthening the U.S.-Taiwan relationship.