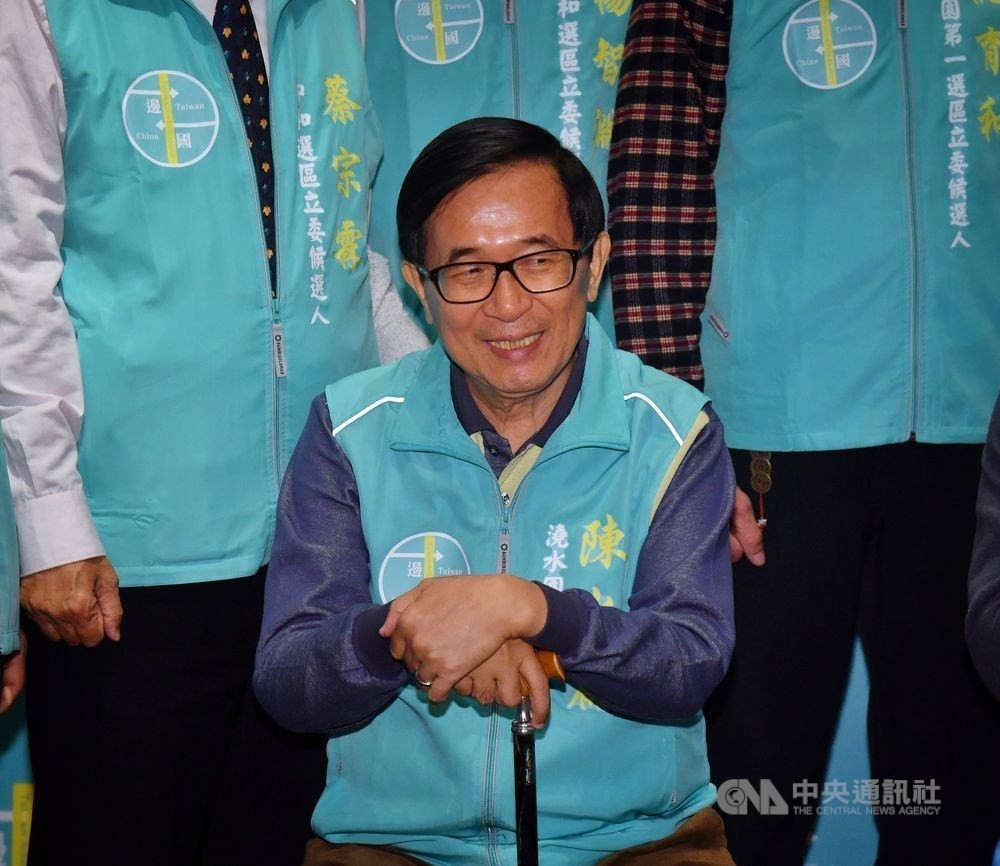 Former President Chen Shui-bian(陳水扁), spiritual head of the Taiwan Action Party Alliance (TAPA), announced Sunday that he is withdrawing from politics and bid farewell to his supporters.

Chen, popularly known as "A-bian" who served as Taiwan's president from 2000-2008, made the announcement in a statement after the party failed to win any seats in the Legislative Yuan after Saturday's presidential and legislative polls.

"I could not sleep last night and engaged in deep reflection on myself," Chen said.

"I fought the battle, but as the gardener of this small tree (TAPA), I feel it is beyond my ability to water, tend and watch it grow any more," he said.

"I'm resigning (as the gardener), and would like to thank everyone for your support and votes (cast for the TAPA) and those who have accompanied me from the very beginning to today,"

The TAPA, created by Chen with the backing of core supporters of Taiwan independence, was launched in Taipei on Aug. 18 last year. Yang Chyi-wen (楊其文), a former president of National Taipei University of the Arts, serves as its convener.

The party advocates for building Taiwan into a sovereign and independent country and seeking Taiwan's entry into the United Nations.

In a video shown at the launch of the party, Chen said he believed that the TAPA could secure 1 million votes in the Jan. 11 legislative elections and win at least three seats or surpass the 5 percent threshold required for legislator-at-large seats.

Chen was embroiled in corruption scandals from his time as president that led to several indictments and a 20-year prison sentence.

He was in prison until January 2015, when he was released on medical parole for reasons of declining health.

Chen has repeatedly ignored the so-called "Four Noes"imposed on him by Taichung Prison as part of his medical parole: no onstage appearances, no speeches, no political expression,and no interviews with the media. He has also slammed Taichung Prison for its restrictions on his public speaking and attendance at public events.

On Nov. 5, 2019, Chen had his medical parole extended to Feb. 4, 2020, the 20th time he has received an extension to stay out of Taichung Prison for medical reasons.