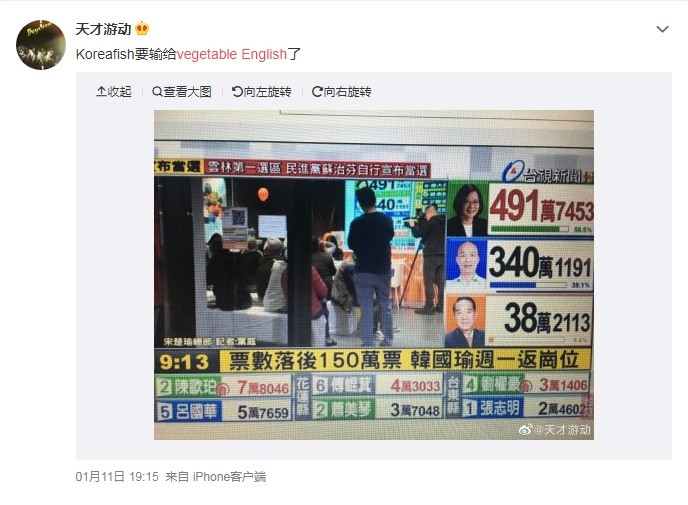 As anticipation rose in China about Taiwan's presidential elections on Saturday (Jan. 11), many resourceful Chinese netizens resorted to using the English nicknames for the two candidates to avoid the communist regime's notorious censorship mechanisms on social media. Weibo users that day released numerous posts referring to Tsai Ing-wen (蔡英文) as "Vegetable English," as her surname, Tsai (蔡), is a homophone with the word for "vegetable" (菜).

As for her Kuomintang (KMT) opponent, Han Kuo-yu (韓國瑜), Chinese labeled him "Korea," as his surname combined with the first part of his given name are same Chinese characters for the word Korea (韓國), and "fish" because the second part of the name, Yu (瑜), is homophonic with fish (魚). Netizens had fun with wordplay at the expense of China's censors while demonstrating a surprising depth of knowledge about Taiwan's political climate:

"Vegetable English has a big lead. Korean Fish has a somber expression."

"Ms. Vegetable English has finally defeated Mr. Bald. Although neither is a good bird, at least he has not clearly screamed an independence slogan. If he is elected, we can eat more tropical fruits and take a good trip... Ms. English has a cool countenance that belies her strength, and the winds of mainland propaganda have turned her into a woman destined to die. It's actually wrong, but it is a good way to prepare for both eventualities."

"There are a lot of sensitive words that could cause posts to be removed. I can only write in English and present a sentence: Vegetable English vs Korea Fish is very jingcai [brilliant]."

"Korea Fish is going to lose to Vegetable English."

"Vegetable Win [homophone with English] is still the leader of a certain province. So is eating vegetables more healthy? It doesn't matter if its vegetables or meat, it's our area anyway."

"How could Korea Fish ever defeat Vegetable English? The young people are basically all [pro] English. The Kaohsiung Mayor was completely impotent in Kaohsiung."