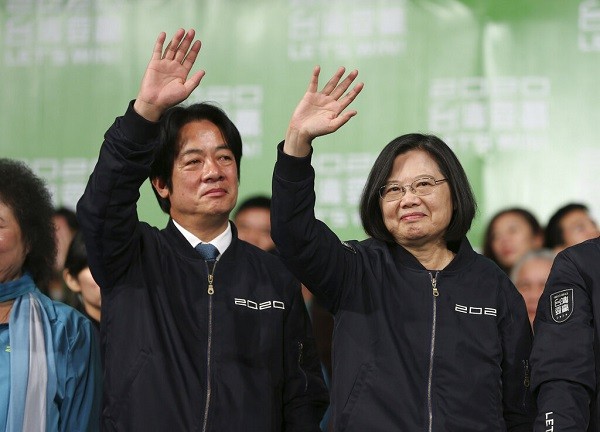 As a foreigner living in Taiwan, I cannot vote, but I have lived 11 years of my life here and it is hard to escape having a personal perspective on domestic politics.

It seems to me that for the second time in a row, the KMT has chosen someone who — like the KMT’s initial selection of Hung Hsiu-chu as its presidential candidate in 2015 — turned out to be an increasingly unpopular candidate. Han Kuo-yu, who had relatively little administrative or political experience to start with, began running for president within a few months of his inauguration as the mayor of Kaohsiung on December 25, 2018. Thereafter, despite his maverick personality, which attracted enough votes to give him a victory in the mayoral election, he quickly set his sights on the presidency.

It is difficult to identify any significant accomplishments in Han’s performance as the leader of one of Taiwan’s most important cities. In fact, a recall campaign in Kaohsiung has attracted wide support. After winning the mayoral race by a wide margin, everything he did seemed to weaken his popular support.

Some of my Taiwanese friends have told me Han appealed to those who were tired of seemingly elitist NTU graduates running the country who are indifferent to the fate of ordinary people. In this regard, Han attracted the same sort of populist support that President Trump had cultivated in the United States. Han was plagued, however, by a stream of negative media reports of his affairs, gambling, drinking, investing in expensive homes, mining gravel on public lands, and most recently, seeking Canadian citizenship for himself and his family, all of which undermined his populist appeal for many.

Han’s specific foreign policy views and credentials were uncertain at best, but he clearly leaned toward closer relations with Beijing. On March 22, 2019, after less than three months in office, Han undertook a seven-day trip to the People’s Republic of China (PRC), including visits to Hong Kong, Macau, and Shenzhen, where he met with CCP officials. Justifying his visit, Han seemed to be arguing that the PRC was the answer to all of Taiwan’s hopes for greater peace and prosperity, as if this had not been tried in the past by former President Ma Ying-jeou.

In Hong Kong, on the heels of the pro-democracy sit-in at the Central Government Complex in the city -- the first in what would become a year of demonstrations -- Han met with Hong Kong Chief Executive Carrie Lam at the Government House. Han followed up with a visit to the Hong Kong Liason Office, where he met with the office director Wang Zhimin, making Han the first Taiwanese politician ever to visit the liaison office. This was hardly a positive signal given popular opposition in Taiwan to the “one country, two systems” formula for unification with the PRC, and it reinforced the fears of many Taiwanese that he might turn out to be a PRC sycophant, especially in light of his frequently unclear, confusing, and self-contradictory statements on cross-Strait policy.

Less than a month later, on April 9, 2019, Han embarked on a nine-day visit to the United States but avoided Washington, where he could have certainly met at least some U.S. officials. In October, Han announced he would have to cancel a planned visit as a presidential candidate to the United States.

On June 5, 2019, Han announced that he would stand in the KMT presidential primary and registered to do so three days later, only six months after he had been elected mayor of Kaohsiung. At a rally on Sept. 8, 2019, in New Taipei City, Han conveyed four main points of his less-than-bold-or-specific campaign platform, which comprised defending the Republic of China, loving Chinese culture, upholding freedom and democracy, and never forgetting struggling people. He then began a three-month leave of absence to focus on his presidential campaign despite not having spent any time focusing on his mayoral responsibilities.

Han’s appearance at a luncheon at the American Chamber of Commerce on August 21, when he spoke to an elite audience of both Taiwanese and American business representatives, was a notable low point for me in his candidacy. It appeared from his jumbled remarks in both Chinese and English that he seemed to think he was speaking to the American Club where he once worked checking membership cards. He did not seriously address trade or economic policy in a coherent manner.

The Lack of Support Among Taiwan’s Youth

Nonetheless, the KMT would have likely had a difficult time even if a better candidate had been chosen. KMT elders continue to rule the party, and the party has failed to develop a significant base among younger voters. This was evident in the contrast in the faces of those attending KMT and DPP rallies.

A familiar KMT policy platform that stresses the need for closer ties to the mainland was also bound to fail once demonstrations erupted in Hong Kong. The so-called “’92 Consensus” necessarily became moribund when it was clear that, in fact, there was no consensus, especially after CCP Secretary General Xi Jinping publicly told President Ma in Singapore on Nov. 7, 2015, that the PRC and Taiwan were “One Country” and “One Blood” and President Ma repeated these same words without ever mentioning “different interpretations.”

In light of events over the past year in Hong Kong, “One Country, Two Systems” has also come to be seen as nothing but a better-sounding cover for the PRC’s authoritarian rule. It is all the more unbelievable in view of the continually more oppressive domestic measures undertaken by Xi which would deny the Chinese people any system of thought outside of “Marxism with Chinese characteristics” and “Xi Jinping thought.” Clear examples are the internment camps for Muslims in Xinjiang (with the excuse of “counter-terrorism” undermined by the PRC coddling the Iranian religious leaders chiefly responsible for terrorism in the Middle East); the introduction of CCP orthodoxy into Christian churches; and the elimination of “academic freedom” from Fudan University’s charter.

Taiwan is Already Ascendant with Tsai at the Helm

Finally, despite KMT criticism of President Tsai’s alleged failings, the Taiwanese economy has been growing stronger, Taiwanese businesses are moving home, Taiwan’s standing in global rankings of countries continues to climb, unemployment is low, national defense is growing stronger, relations with the U.S. and other democracies have never been better, and despite a decline in PRC tourists, overall tourism to Taiwan is at an all-time high. Clearly, as in all countries, problems remain, but President Tsai has proven to have a steady hand in the face of enormous challenges, and her emphasis on maintaining the cross-Strait status quo has reassured the public in the face of PRC intimidation and threats. In contrast to the KMT’s apparent inability to heal old party divisions, President Tsai deftly handled the challenge of William Lai and brought him on board as her running mate with a clear path to possible succession.