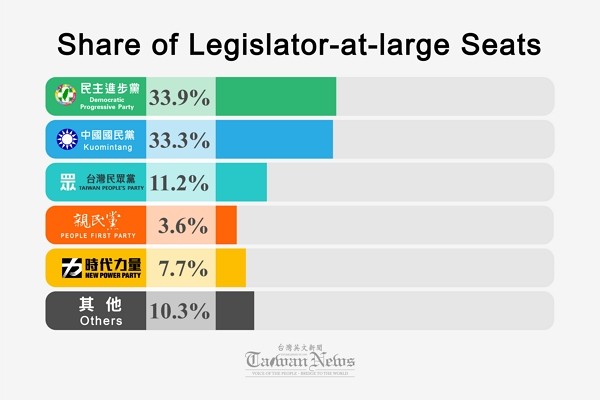 In fourth place was the once prominent New Power Party (NPP) with 7.7 percent of the national party votes, or three seats. After two of its highest-profile legislators, Freddy Lim (林昶佐) and Hung Tzu-yung (洪慈庸), left the party last August, the NPP has lost its luster as Taiwanese voters' new favorite.

The DPP had a landslide victory in local districts across Taiwan's special municipalities, taking 48 of the 73 available seats. The ruling party will have more than 60 legislative seats, once again securing its majority in the Legislative Yuan.

According to the Central Election Commission (CEC), there were 19.31 million eligible voters this year, among whom 1.18 million were first-time voters. The counting of Saturday's election ballots started immediately after voting closed at 4 p.m., and it went relatively smoothly compared to 2018's Taiwan local elections.

Out of the 113 seats at Taiwan's Legislative Yuan, 73 are directly elected in local districts through first-past-the-post races, six are reserved for indigenous candidates, while the other 34 are awarded to at-large candidates based on proportional representation of each party.

At the last election in 2016, the DPP secured a comfortable majority with 68 seats, while the KMT sharply dropped to only 35 seats. Many suspected the DPP would be fiercely challenged by the opposing Kuomintang (KMT) as well as smaller parties, but Saturday's results seem to suggest otherwise.