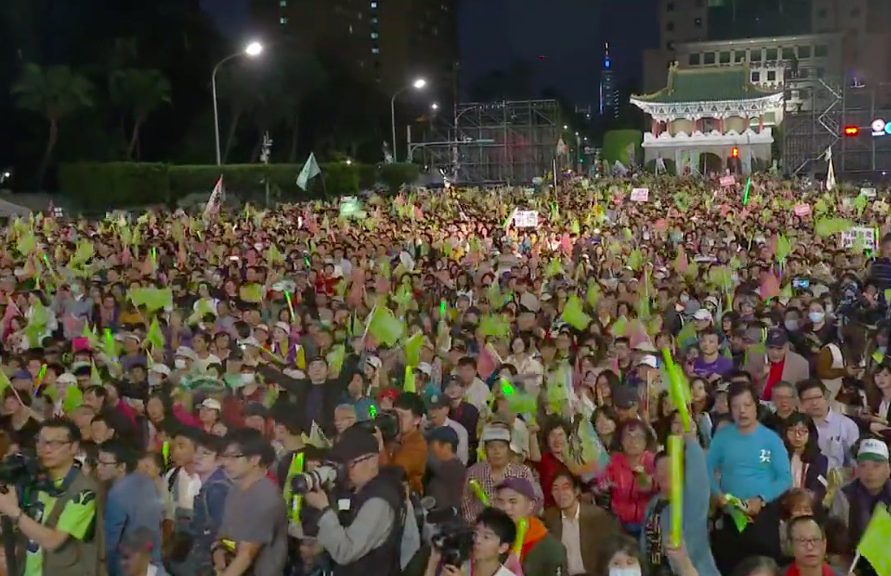 President Tsai Ing-wen (蔡英文) called Friday for unity and love among her supporters on the eve of Saturday's elections, when Taiwan's voters will go to the polls to elect their president and legislators.

Speaking before a street parade to solicit votes for a legislative candidate of her Democratic Progressive Party (DPP) in New Taipei's Tucheng District, Tsai exhorted her supporters to firmly back the DPP contender and not to doubt their choice, saying that the DPP's path is correct.

"We must come together and never underestimate our rival," she said, referring to her prime competitor in the three-way presidential race -- Kaohsiung Mayor Han Kuo-yu (韓國瑜) of the main opposition Kuomintang (KMT).

"We must endure to the last minute and achieve electoral victory with unity and love," given that "many supporters of Tsai Ing-wen and Han Kuo-yu might be from the same family," she said.

Tsai, Han and People First Party Chairman James Soong (宋楚瑜) are vying for the 2020 presidency, with either Tsai or Han expected to emerge victorious.

At a news conference held at the KMT's headquarters, Tseng Yung-chuan (曾永權), the party's vice chairman who serves as Han's campaign manager, urged the public to cast their votes for Han.

"We must be united and vote for Han to get rid of the corrupt DPP, to allow Han to build a safe and prosperous Taiwan," he added.

"If you are an opponent of Tsai but decide not to vote for Han, this means you will be doing Tsai a favor," said Chou Hsi-wei (周錫瑋), deputy manager of Han's campaign.

For his part, Soong, a former KMT secretary-general from 1989- 1993, urged supporters of the pan-blue camp led by the KMT not to repeat the same error they made in 2000 by switching their support for him to Han.

Soong, who defected from the KMT to run in the 2000 presidential election as an independent against KMT candidate Lien Chan (連戰) and DPP contender Chen Shui-bian (陳水扁), eventually lost a fierce to Chen 36.84 percent to 39.3 percent, with Lien in third place with 23.1 percent.

Ascribing his 2000 defeat to a split in the pan-blue camp as a result of a KMT scheme that intentionally led pan-blue supporters to vote for Lien instead of him through fake public opinion polls, Soong said Taiwan needs a government on which the people can rely and which is capable of serving the people.

"Whether you are a KMT supporter or a DPP supporter is not the issue," he claimed. "In line with the basic rules of a democratic society, the most important thing is to elect a capable and honest man to serve us."