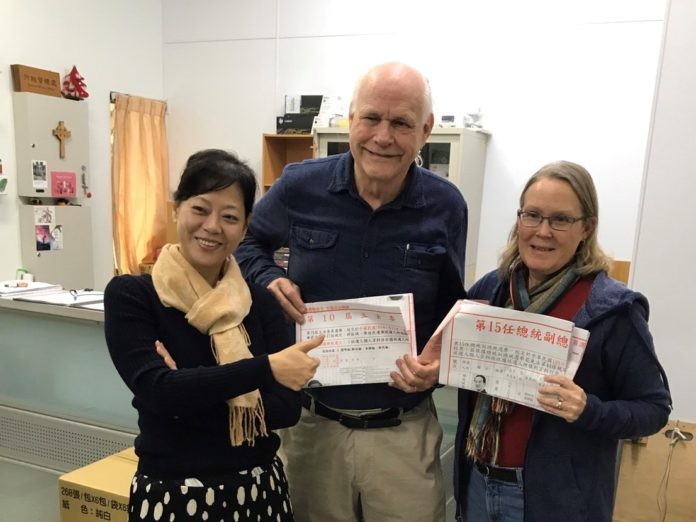 TAIPEI (Taiwan News) — An American couple who had lived in Taiwan for 39 years before becoming naturalized Taiwanese citizens and retiring in the U.S. has flown 12,000 kilometers back to Taiwan to vote in Saturday's (Jan. 11) elections.

David Alexander (亞大偉), a Vietnam veteran, and Charlene Bos (莫霞琳) first met in Taiwan in 1976, when they were working in English teaching programs for the Presbyterian Church. The couple returned to the U.S. in 1979 to attend graduate school and wed in 1980.

After obtaining post-graduate degrees in theology and education and having become well-versed in Mandarin and Taiwanese Hokkien, the couple returned to Taiwan in 1982. From 1982 to 2018, the two worked served in the Presbyterian Church in Taiwan and raised two children.

For much of their stay, they were based in Kaohsiung, where their daughter Katherine was born in 1985 and their son Grant in 1991. The family later moved to Tainan in 2007, where they resided until the couple retired in 2018.

Over the years, David has received a number of awards, including the Taiwan Ministry of Interior's (MOI) recognition for long-term service to the nation in 2007 and the Presidential Office, Order of Brilliant Star with Violet Grand Cordon in 2015. David and Charlene in 1982. (Tainan Theological College and Seminary photo)

In 2018, at a ceremony in Tainan City, David and Charlene formally received their Taiwan citizenship for their decades of service to the country without having to relinquish their American citizenship. The couple retired later that year and returned to the U.S., where they purchased a home in Holland, Michigan.

David told Taiwan Church News Network (TCNN) that they retired to take care of his 92-year-old mother-in-law. With them, the couple took a pet cat that they had rescued from the roadside in Kaohsiung and raised for 10 years.

Charlene said that she was initially concerned about being able to buy a house in the U.S., but she said that it went more smoothly than expected. However, she said that moving into the home was a big project with many boxes from Taiwan yet to be unpacked.

Unfortunately, their pet cat died only four months after they moved to the U.S., and David said that his mother-in-law also died at the end of June last year. Nevertheless, David said he was grateful for the 11 months he was able to spend with his mother-in-law.

The couple's son successfully completed his doctoral dissertation in November of last year. David said that now that they no longer had a cat, son, or elder to take care of, they suddenly have more free time to travel. The couple receiving their Taiwanese citizenship in 2018. (CNA photo)

Before leaving Taiwan, the couple had vowed to make trips back to the country to vote. In September, the Alexanders purchased tickets to fly back to Taiwan just before this year's elections.

David told TCNN that "Although we only have two votes, we want to protect Taiwan. We must help Tsai Ing-wen get reelected." He said that in the 39 years they spent in Taiwan, they had seen a lot of changes on the island.

He said that when they first arrived, Taiwan had no freedom at all, but over time, the political situation gradually changed until it transformed into a democratic country. He said that as elections started to take place, the couple longed to take part but were unable to because they lacked Taiwanese citizenship.

They were pleasantly surprised when they finally received their Taiwan ID cards in 2018, and it was then that they vowed to return to vote because "We are Taiwanese too!" While flying back to Taiwan from the U.S. David laughed when he thought back about the reaction of flight crews when they took out their Taiwanese passports.

Regarding the election, David emphasized, "If you don't vote, you give up the right to make decisions!" For her part, Charlene expressed concern about Hong Kong and the importance of preserving Taiwan's democracy, saying "We all saw the situation in Hong Kong, and we must protect Taiwan!"