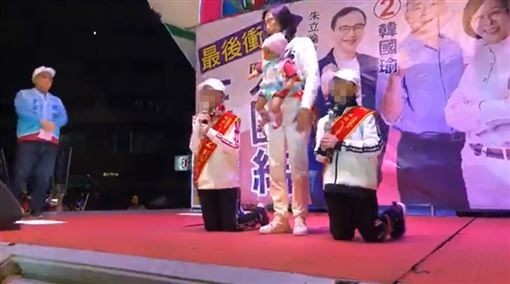 TAIPEI (Taiwan News) — Non-Partisan Solidarity Union legislative candidate Li Weng Yue-e (李翁月娥) appeared on stage on Wednesday (Jan. 8) with her grandchildren at her final campaign rally, where the two children knelt to ask for more votes on their grandmother's behalf.

Li Weng has been fighting a tough battle in the lead-up to Saturday's (Jan. 11) legislative election. This year, she teamed up with the Kuomintang (KMT) party to challenge incumbent Democratic Progressive Party (DPP) legislator Yu Tien (余天) in the DPP stronghold of Sanchong District in New Taipei City.

During the rally on Wednesday, Li Weng's two grandchildren, who are currently studying in elementary school, walked onto the stage to praise her diligence and express their sadness about seeing their grandma accused of corruption during the race. The children then knelt twice to beg for support from the predominantly middle-aged audience as Li Weng, who held a baby doll, bowed between them, reported Liberty Times.

Kneeling is not an unfamiliar sight during Taiwan's election campaigns and is not restricted to the candidates and their relatives. In 2009, a local magistrate's wife went down on her knees to rally support for DPP candidate Helen Chang (張花冠), and current People's First Party presidential candidate James Soong (宋楚瑜) publicly knelt to demonstrate his faith in former President Ma Ying-jeou (馬英九) during the latter's mayoral run in 2002.

The vice-chairman of the Taiwan Youth Association for Democracy, Ho Wei-tzu (何蔚慈), told UDN that using innocent young children to elicit compassion from the public might constitute a violation of Articles 49 and 97 of Taiwan's The Protection of Children and Youth Welfare and Rights Act. Offenders of this legislation face fines of between NT$60,000 (US$2,000) and NT$600,000. 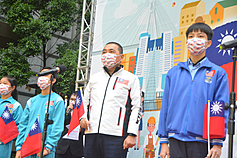 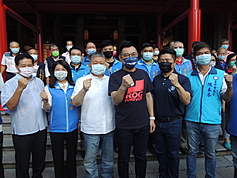