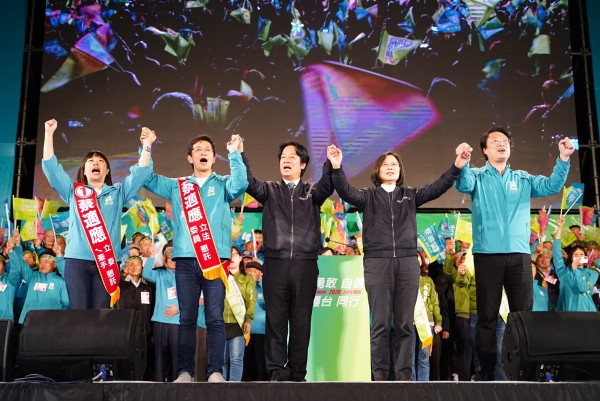 On Thursday evening, while Han was holding a rally on Ketagalan Boulevard, Tsai spoke to her supporters at a rival event in Keelung City. At the rally, titled "Night of Love for Keelung," speeches were also given by Vice President Chen Chien-jen (陳建仁), vice presidential candidate William Lai (賴清德), Vice Premier Chen Chi-mai (陳其邁), and Keelung Mayor Lin Yu-chang (林右昌).

Organizers announced that 15,000 people had crammed into the Liuhe parking lot where the event was held. Tsai said that over the last few days, her opponent had flooded the internet and TV with ads, with even her own staff members receiving calls to vote for Han.

Tsai says she knows DPP supporters are very anxious about the upcoming election and suggested that the best way to allay their fears would be to go out and vote on Jan. 11. She said that voters should cast three votes for Taiwan: one for herself, one for Keelung DPP legislator Tsai Shih-ying (蔡適應), and one for the DPP.

Tsai called on supporters to not to underestimate or foment hatred against their opponents. She told the crowd that "We need to use one vote to tell the world that Taiwanese want democracy and freedom and that it is the wish of all us to strengthen Taiwan," reported Liberty Times.

She said that she had not taken a single day off in the three years since taking office and said she was committed to promoting national reform. Tsai said her campaign is for the people of this land and for the young people.

The president then said that she was aware that "another group of people" on Ketagalan Boulevard dozens of kilometers away have "different ideas" about the reform and development of the country. She pointed out that Han's followers could be the parents, teachers, and friends of the young supporters present, but regardless of who they are, everyone should have a common understanding that "We are all Taiwanese," according to the report.

Tsai then called on her supporters to welcome Han fans saying, "Everyone should open their arms and embrace them, regardless of whether we lose or win," reported Liberty Times. She then took a serious tone when she reminded followers of the recent unrest in Hong Kong and said, "To not go and vote is to wait for others to decide your own future."