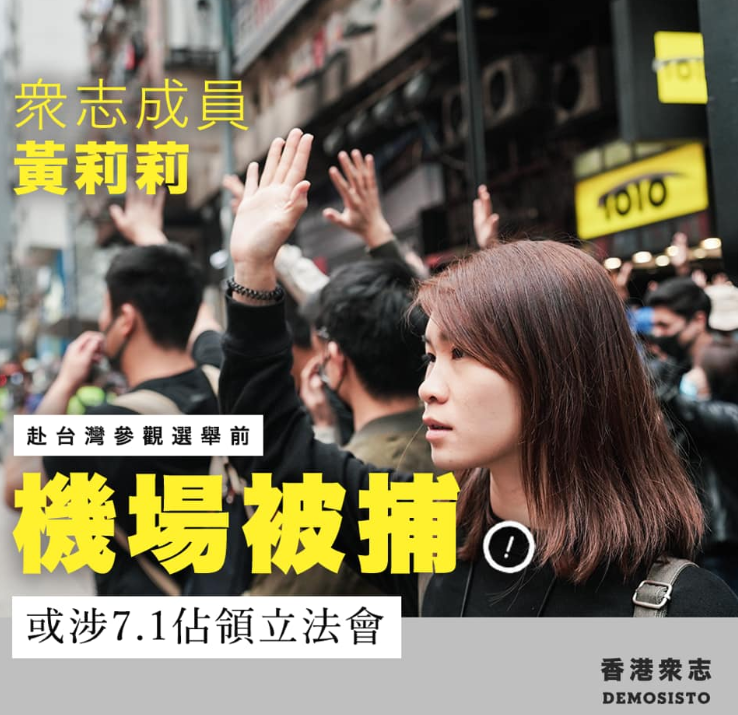 TAIPEI (Taiwan News) — Hong Kong democracy activist Lily Wong (黃莉莉) was arrested at the Chinese territory’s airport as she was about to leave for Taiwan to observe Saturday’s (Jan. 11) presidential and legislative elections, according to her party, Demosisto.

Police took her away Thursday (Jan. 9) evening because she was accused of having taken part in the storming of the Legislative Council on July 1, the South China Morning Post reported.

Demosisto quoted a lawyer who is assisting Wong as saying that she did not know she had been listed as a wanted person by police in connection with the incident.

The 26-year-old pro-democracy activist had been under investigation, but the authorities were unable to find her inside Hong Kong and had put her on a list of persons of interest that airport immigration services should watch out for.

On July 1, after Hong Kong marked the 22nd anniversary of its handover to China, hundreds of protesters stormed the legislature and reportedly vandalized the chamber, spraying graffiti on its walls and damaging equipment.

The months of unrest in Hong Kong and the brutal police crackdown on protesters have become a major factor in Taiwan’s elections.