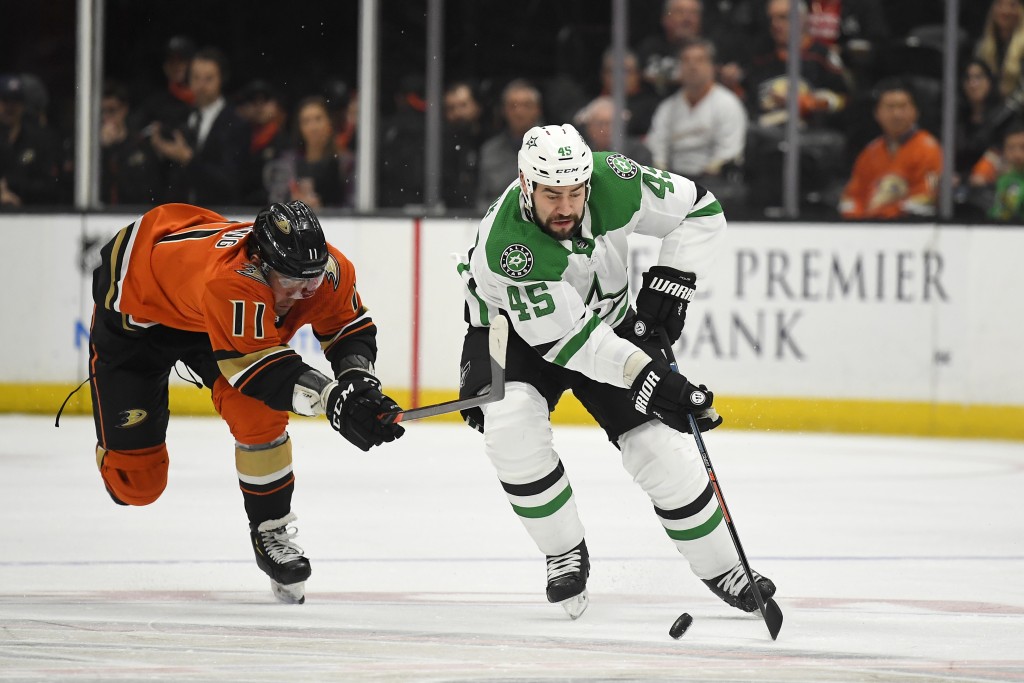 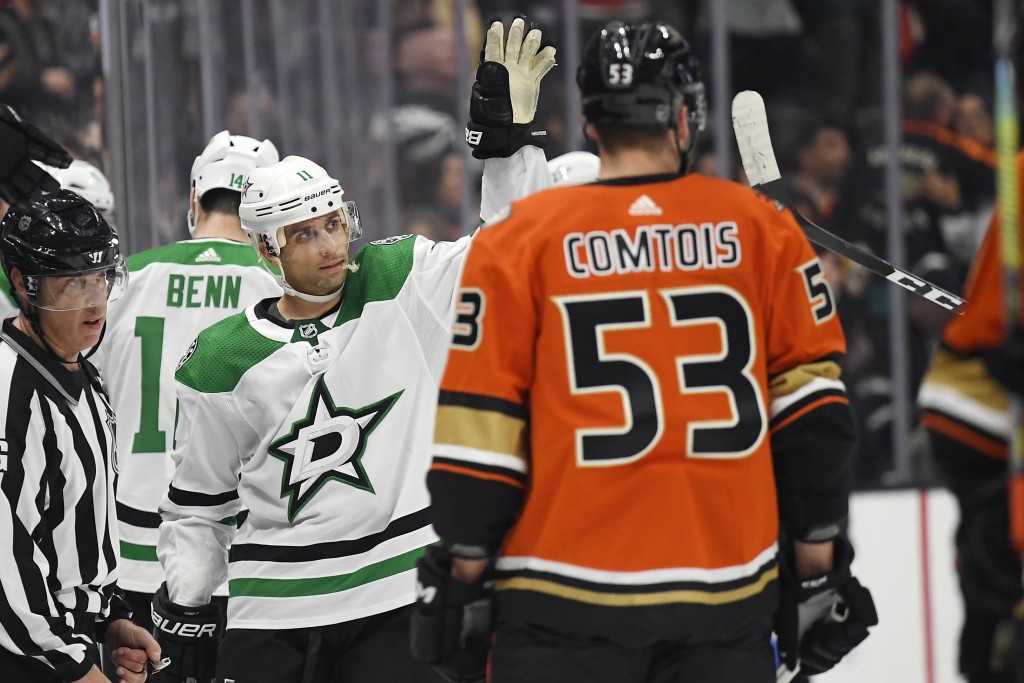 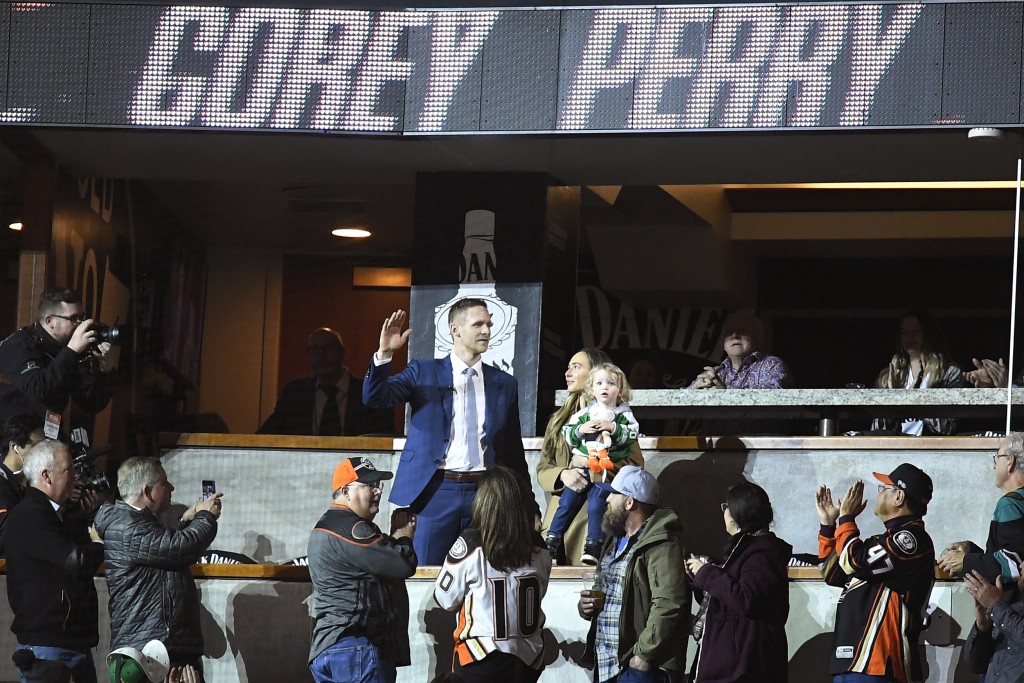 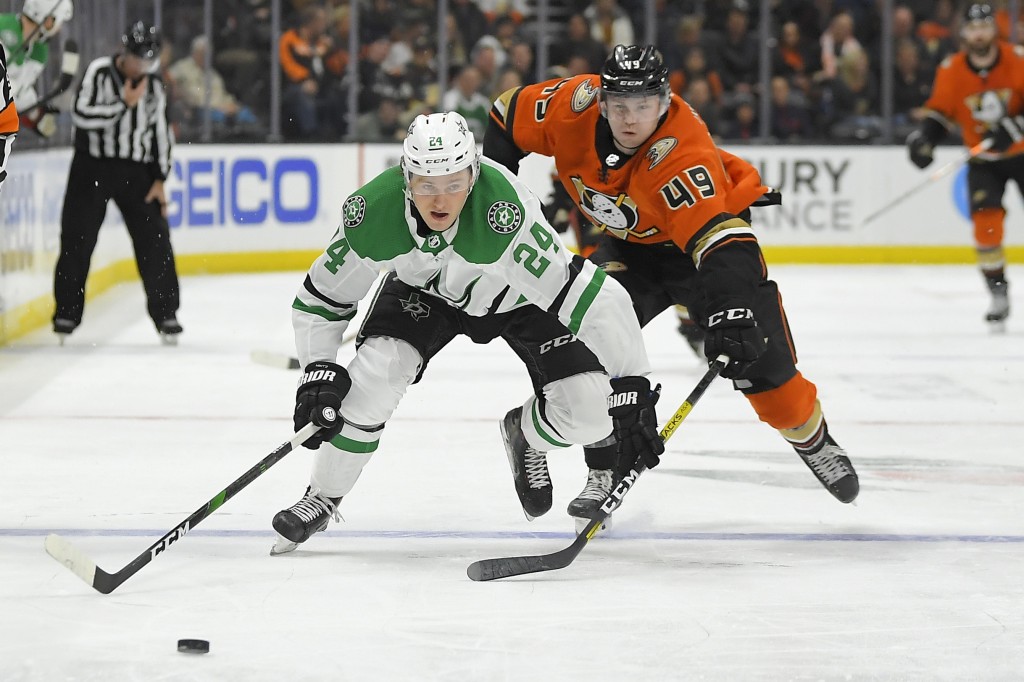 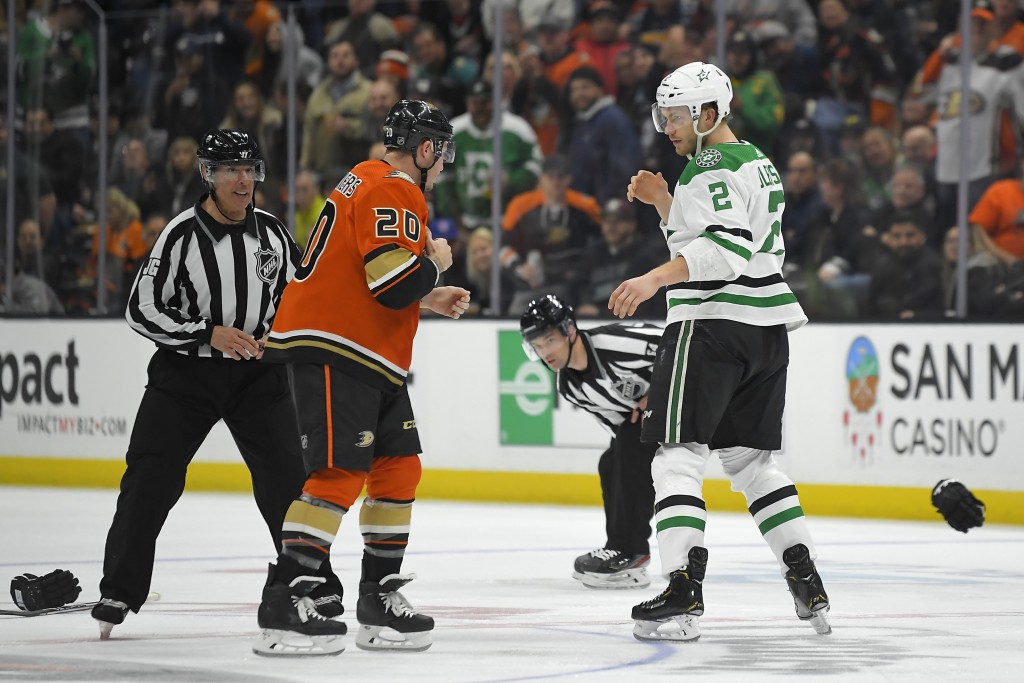 ANAHEIM, Calif. (AP) — Ben Bishop made 27 saves in his 33rd career shutout, and Roope Hintz had a goal and an assist in the Dallas Stars' sixth straight victory, 3-0 over the Anaheim Ducks on Thursday night.

Denis Gurianov and Alexander Radulov scored power-play goals for the Stars, who completed a sweep of back-to-back games in Southern California. After five consecutive comeback wins, Dallas didn't even have to rally for the first time during this streak after taking a lead in the first period.

Dallas also capitalized on an apparently incorrect high-sticking penalty against Anaheim's Max Jones in the second period, with Radulov scoring his 13th goal on the ensuing power play. Video replay clearly showed the stick of Stars defenseman Roman Polak had hit Jason Dickinson in the face instead.

Hintz added an empty-net goal with 3:04 to play.

Corey Perry and Andrew Cogliano returned to Anaheim for the first time since joining the Stars, and both veteran forwards received long standing ovations from the Honda Center crowd.

In their final home game for nearly three weeks, the Ducks were shut out for only the second time this season despite being the Western Conference's lowest-scoring team. Anaheim has lost five of six overall.

The game was a warm homecoming for Perry and Cogliano, who joined the Stars last year after lengthy careers as mainstay forwards for the Ducks. Perry had to watch from the stands with his family while he served his suspension for elbowing Nashville's Ryan Ellis in the Winter Classic.

Both veterans received standing ovations from Ducks fans after their tribute videos aired on the scoreboard during the first period.

Perry spent the first 14 seasons of his NHL career with Anaheim, winning the Stanley Cup in 2007 shortly after he broke into the league alongside Ryan Getzlaf, his longtime teammate and linemate. Perry won the 2011 Hart Trophy as the NHL's most valuable player and racked up 372 goals and 404 assists with Anaheim, making him the third-leading scorer in Ducks history.

The Ducks bought out the final two seasons of Perry's contract last June after a season plagued by injury and declining production.

Cogliano spent 7 1/2 seasons in Anaheim before the Ducks traded him to Dallas last Jan. 14 amid similar production problems. A superb forechecker and speedy penalty-killer who lacks only a consistent scoring touch, Cogliano played a key role on five consecutive Pacific Division championship teams for Anaheim.

Gurianov scored in the first period off a sharp cross-ice pass by Hintz. The Stars then cashed in after that apparently botched call against Jones in the second.

NOTES: Silfverberg, the Ducks' lone All-Star selection, incurred an upper-body injury in Tuesday's loss to Columbus. Max Comtois returned to Anaheim's lineup in his place. ... Stars D John Klingberg missed his third straight game with a lower-body injury. ... Perry is three games into his five-game suspension. He should have another chance to play in front of Ducks fans when the Stars visit again April 1.

Stars: At the San Jose Sharks on Saturday to complete the California portion of their trip.