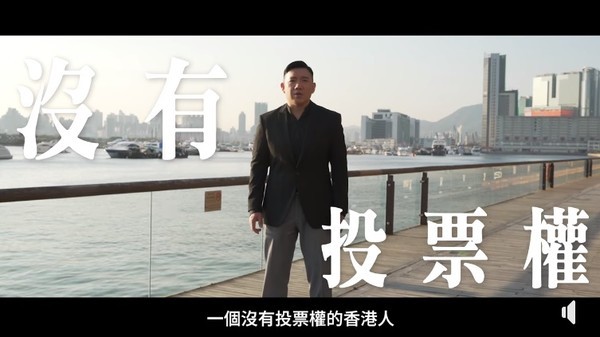 TAIPEI (Taiwan News) — A short but moving video by Hong Kong actor Chapman To (杜汶澤) calling on Taiwanese to cherish their democracy and vote has quickly gone viral in Taiwan, with over 120,00 views within just three hours.

With the 2020 Taiwanese presidential election just two days away at the time, To released a 46-second-long video that he voiced over in Mandarin on Thursday (Jan. 9) on his Facebook page. In the video, the screen shows the tranquil waters of Victoria Harbor in Hong Kong and To says, "Democracy is a basic right for Taiwanese, just like air."

Next, the screen flashes to violent, bloody scenes of confrontations between riot police and Hong Kong pro-democracy protesters. As numerous violent episodes play out on the screen, To laments, "But for Hong Kong people, our next generation is covered in blood. Democracy is far out of reach."

To then reminds Taiwanese citizens that the people of Hong Kong cannot directly choose their top leader by saying, "I am To Man-chak, a Hong Kong person without the right to vote." To closes by telling Taiwanese, "Please everyone cherish your right. On Jan. 11 go home and vote."

"Please come out to vote. Support democracy and cherish the air of freedom."

"Freedom and democracy are not innate. If you don't protect it, you won't have the right to vote."

"The right to vote is a gift. Democracy does not come easily."

"Why on Earth would anyone not go home to vote?

"Taiwanese have the responsibility to choose and be responsible for the future of Taiwan."