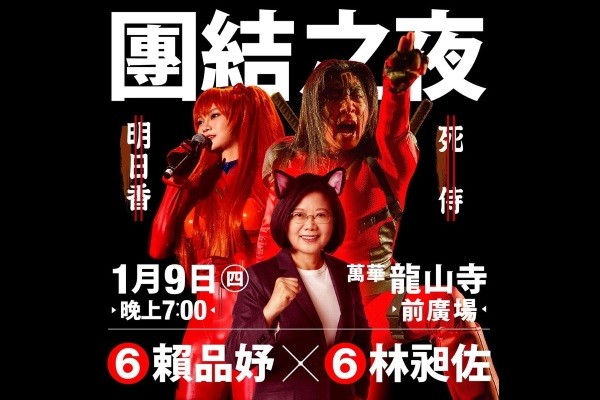 The advertisement was posted on the Facebook page of death metal band frontman-turned-politician Freddy Lim (林昶佐) on Wednesday.

In the center of it all is President Tsai Ing-wen (蔡英文) wearing pink cat ears on her head, presumably in honor of her two pet cats Think Think and Ah Tsai. She has a broad grin on her face and is tightly clenching her fist.

The venue of the event, which was held on Thursday (Jan. 9). at 7 p.m., was Longshan Temple in Taipei's historic Wanhua District. Since its publication on Wednesday, the ad has received 12,000 likes, 488 shares, and 258 comments.

"Tsai Ing-wen's frozen garlic poster looks really good." "Frozen garlic" in Mandarin is a play on words because it sounds like the Taiwanese Hokkien pronunciation of the phrase "to get elected" (當選).

"With ears, there is even more joy." The commenter is referring to Tsai's wearing of cat ears.