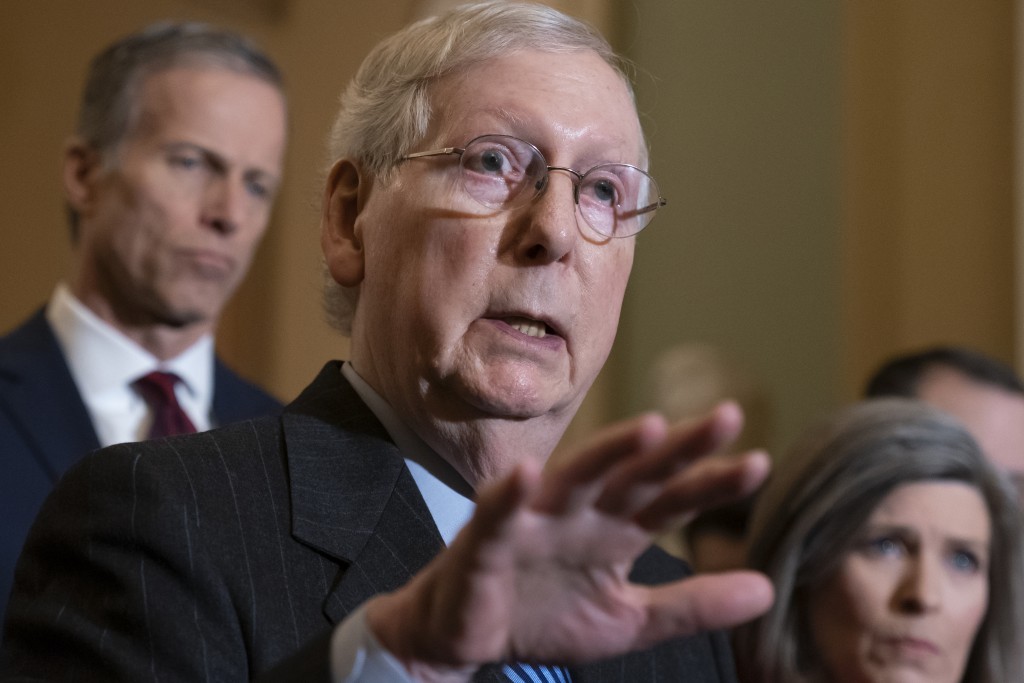 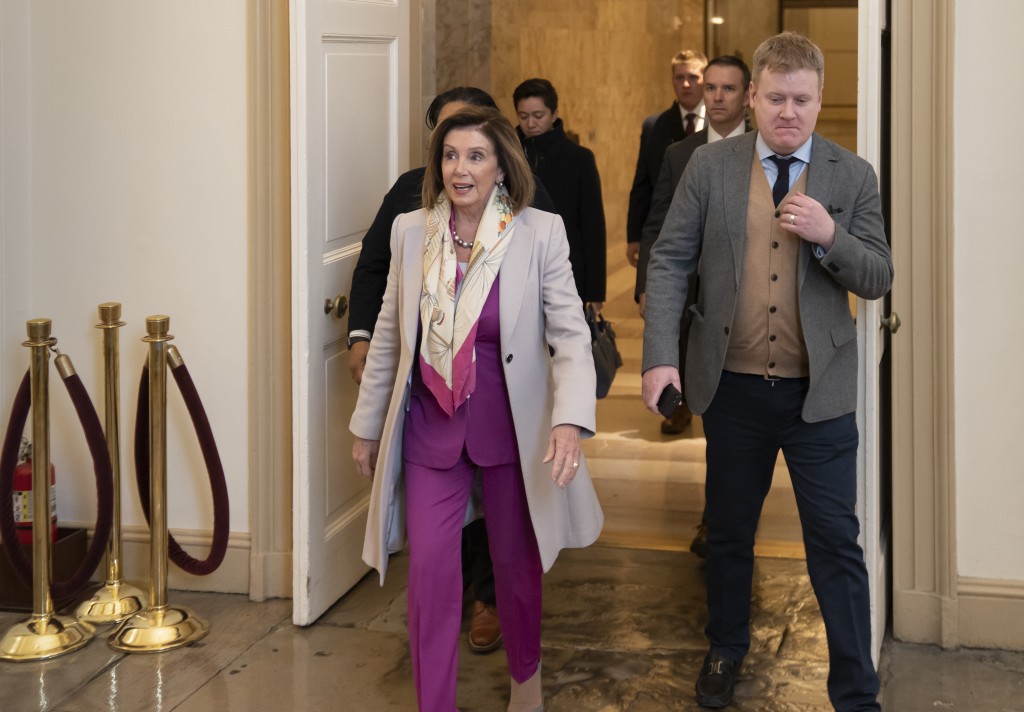 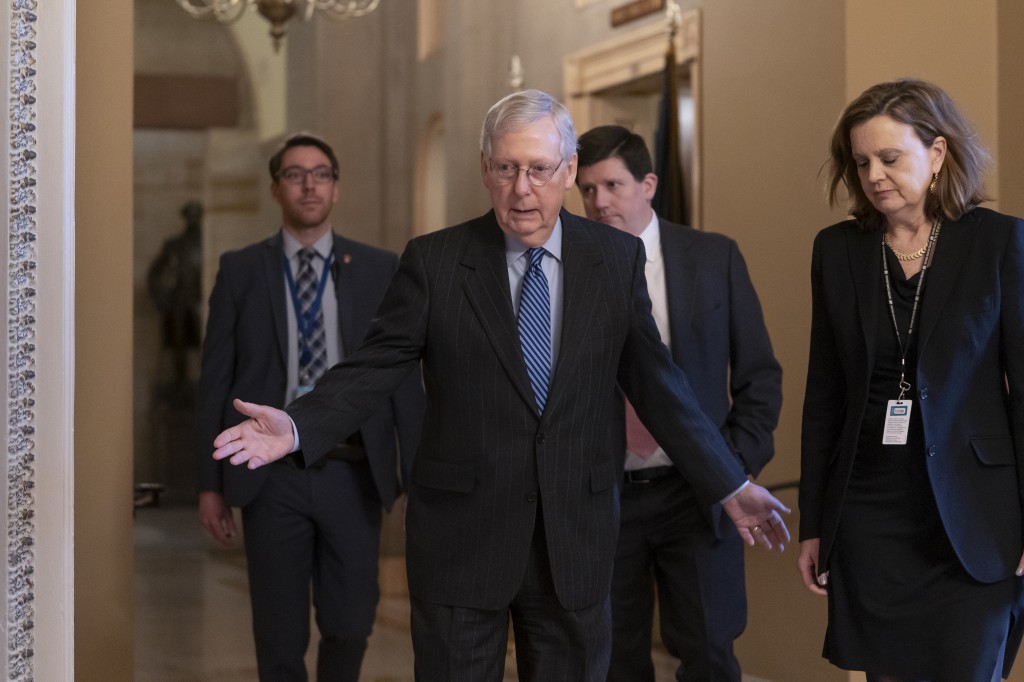 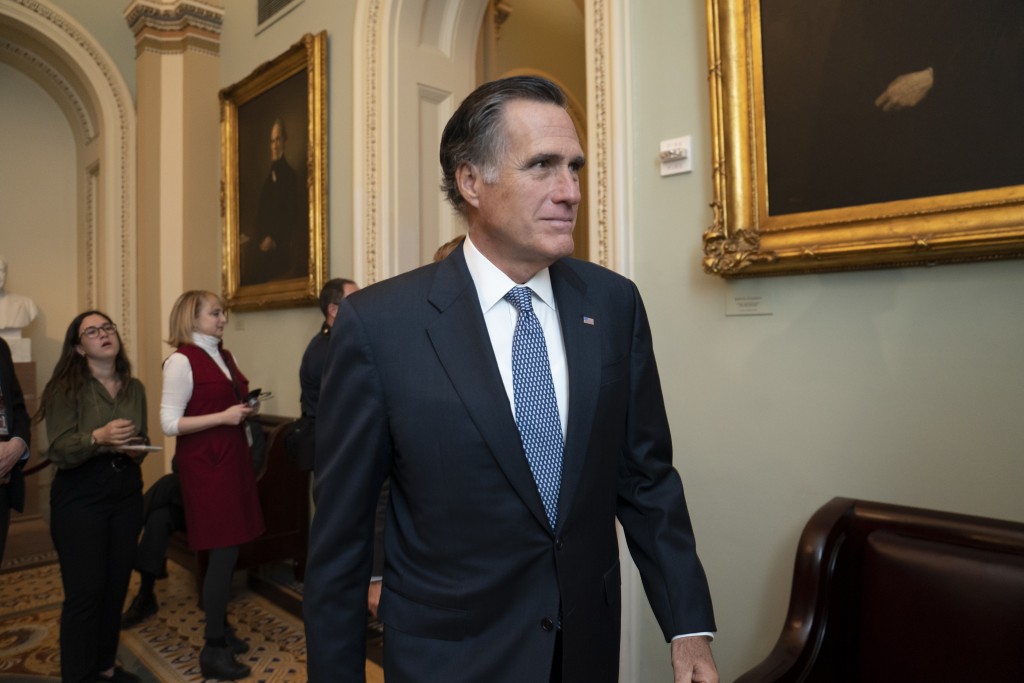 The announcement Tuesday was significant, enabling McConnell to bypass for now Democratic demands for new testimony as he launches the third impeachment trial in the nation's history. It could begin this week if Pelosi sends the articles of impeachment to the Senate.

But Pelosi gave little indication of her next move. She cut short an impeachment discussion with her leadership team Tuesday night at the Capitol when an aide handed her a note about the crisis unfolding in the Middle East. She asked Democrats to “pray,'' according to a lawmaker at the closed-door session.

Pelosi appears in no rush to transmit the articles of impeachment as Democrats push to hear from more witnesses but McConnell focuses Republicans on a strategy for speedy acquittal. The Senate can't start the proceedings until the charges against Trump are sent.

"We have the votes,” McConnell told reporters about his proposal that would set the rules for a trial and would be modeled after President Bill Clinton's impeachment 20 years ago. He said the question of new witnesses and documents will be addressed later “and not before the trial begins.”

The contours of a Senate trial have been in dispute for weeks. Pelosi is delaying transmission of the articles as Democrats press for testimony from former national security adviser John Bolton and other new witnesses.

“Sadly, Leader McConnell has made clear that his loyalty is to the President and not the Constitution,” Pelosi wrote to colleagues late Tuesday. She said the process he is outlining "is not only unfair but designed to deprive Senators and the American people of crucial documents and testimony.''

Pelosi told House leaders Tuesday she believed the strategy was working, according to those in the private meeting. Shecalled on McConnell to “immediately” reveal the details of his proposal.

“People are united," said Democratic Rep. Mike Thompson of California about the mood in the House caucus.

McConnell has resisted calling new witnesses and expects the trial to end with the GOP Senate majority voting to acquit the president of the charges, and without Trump's removal from office.

The GOP leader told senators at their closed-door lunch Tuesday that he has support for his plan. It would start the trial first and postpone votes on witnesses until later in the process.

In withholding the articles, Pelosi gave Democrats an opportunity to ramp up pressure on Republicans not to go along with McConnell's proposal. Senate Minority Leader Chuck Schumer called McConnell's plan a “trap” and a “cover-up.” He vowed to force votes anyway on Bolton and the others.

Republicans countered that Democrats rushed to impeach and then delayed the process. Pelosi has yet to choose House impeachment managers for the trial, a politically sensitive next step, with many lawmakers vying to be candidates. The House impeached the president last month on the two charges.

Just four GOP senators would be needed to deny McConnell his majority, but he appears to have locked up the votes. GOP leaders were conducting a whip count Tuesday to gauge support. Several GOP senators have indicated they want to hear from Bolton and other witnesses, but they are nevertheless standing with McConnell's plan for starting the trial.

“I'm comfortable with that process,” said Sen. Mitt Romney, R-Utah. "I'd like to hear from John Bolton and other witnesses with the right information, but that process will accommodate that.”

Sen. Susan Collins, R-Maine, has also said she supports McConnell's approach. Others say they are not sure they even need to hear from Bolton or other witnesses, blaming the House for not forcing them to testify. Trump had instructed White House officials not to comply with the House investigation.

Trump faces charges that he abused the power of the presidency by pressuring Ukraine's new leader to investigate Democrats, using as leverage $400 million in military assistance that is critical for the ally as it counters Russia at its border.

The funding for Ukraine was eventually released but only after Congress intervened.

From the Oval Office, where Trump was meeting with the prime minister of Greece, he railed against the impeachment proceedings, as he often does, as "a totally partisan hoax witch hunt.''

Trump insisted “there was absolutely nothing done wrong” in his interactions with Ukraine.

Republicans are expected to swiftly acquit Trump of the charges, but Democrats say fresh evidence, including Bolton's willingness to testify, only increases pressure for new witnesses and documents.

Bolton apparently compared the administration's actions toward Ukraine to a “drug deal” he wanted no part of, a shadow diplomacy being concocted by the acting White House chief of staff Mick Mulvaney and Ambassador to the European Union Gordon Sondland, according to House testimony. Bolton left the administration in September.

Democrats also want documents about the withheld aid to Ukraine that the White House refused to turn over to House investigators, defying congressional subpoenas.

With a 53-seat majority, McConnell has only loose control over the impeachment proceedings, where decisions on witnesses or documents can be made with a 51-vote majority.

Pressure will mount on senators up for reelection from swing states in 2020, including Collins, Tillis, Iowa GOP Sen. Joni Ernst and Colorado GOP Sen. Cory Gardner, who are being closely watched for their votes by a deeply divided country. Protesters are showing up at the Capitol.

McConnell deflected a question Tuesday on whether Trump acted appropriately with Ukraine, saying he had nothing more to add on that issue. He acknowledged the votes on witnesses and documents will be “the most contentious'' part of the proceedings. "There will be, I’m sure, intense discussion," he said.

The GOP leader has come under criticism for saying he was not an impartial juror but rather was working in total coordination with the White House on the trial strategy. Democrats similarly worked with Clinton's White House during his impeachment.