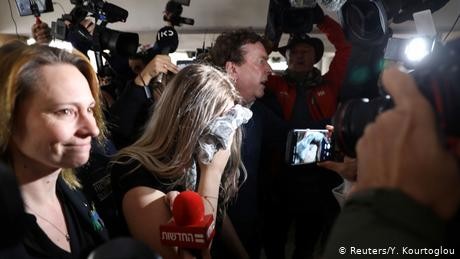 A Cypriot court handed a British woman found guilty of faking a gang rape claim to a four-month suspended sentence on Tuesday.

The woman was charged with "public mischief." She accused 12 Israeli youths of raping her in a hotel room in Ayia Napa, before retracting the accusation.

The jail sentence is suspended for three years, meaning if she commits a crime in this time she will go to prison.

The case has caused uproar from the UK and rights groups over concerns that the trial was not fair. The British teenager's lawyer said that the trial had been full of investigatory and legal mistakes, and said that the judge repeatedly refused to consider whether the rape took place.

The young woman withdrew the rape claim after persistent questioning and without a lawyer present. Protesters in London and Cyprus used the chant "I believe her," offering solidarity with the young woman.

The 19-year-old smiled and hugged her family in court on hearing the sentence. Judge Michalis Papathanasiou said he had decided to give the woman a "second chance" since she had admitted to making a mistake and given her young age and the fact that she had already spent a month in detention during the trial.

The Israelis, who were aged 15 to 18, were released without charge the same month the 19-year-old woman was arrested. The individuals who the woman accused of assaulting her were not present in court because prosecutors considered it a case of public mischief and not rape.

The defendant's lawyer, Justice Abroad's Michael Polak, expressed disappointment at the verdict in December but added that he was not surprised by the result "given the frequent refusal during the trial of the judge to consider evidence which supported the fact that the teenager had been raped."

Polak said that he intends to appeal the verdict before the Supreme Court of Cyprus.