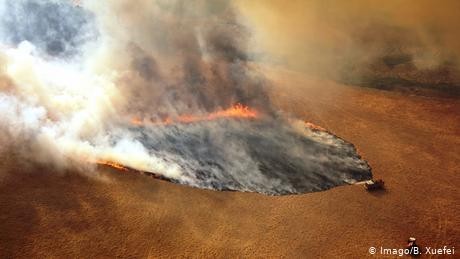 Australian firefighters took advantage of Tuesday's brief drop in temperatures and much-needed rain to control catastrophic wildfires in the southeast of the country, as Prime Minister Scott Morrison prepared to meet with financial bosses to discuss the soaring costs of the crisis.

Firefighters and volunteers strengthened containment lines around almost 200 bushfires and carried out controlled burns before winds and temperatures were anticipated to pick up again by Friday.

"It really is about shoring up protection to limit the damage potential and the outbreak of the fires over the coming days," said New South Wales Rural Fire Service (RFS) commissioner Shane Fitzsimmons.

While Tuesday's conditions were "much more favorable," he warned that "we are expecting hotter weather to return later in the week."

Dozens of massive wildfires continue to burn in the east of the country. Fire authorities fear that two blazes in the states of New South Wales and Victoria could connect to create a megablaze.

"We have no prospect of containment on all those fires, but we can use this time," RFS Deputy Commissioner Rob Rogers told reporters. "They are trying to secure fire lines where they can to try and minimize where these fires will burn again when conditions do warm up."

Fires have ripped through more than 8.6 million hectares (21.3 million acres) of land across Australia, destroying thousands of homes.

On Tuesday, the Insurance Council of Australia increased its estimate for damages claims for the bushfires to more than $485.59 million (€434 million), with claims predicted to leap when more affected areas are accessible.

The government has allocated an initial $1.4 billion for a national recovery fund to assist fire-hit communities.

The commitment could compromise Morrison's election promise to provide Australia's first budget surplus in more than a decade this financial year.

The prime minister is expected to meet with insurance and bank executives to discuss the fire crisis.

"There's going to be a very significant economic impact, but ... We want to get money out into these communities as fast as possible," Treasurer Josh Frydenberg told the Australian Broadcasting Corp.

Organizers at the Australian Open tennis Grand Slam said on Tuesday that smoke from the bushfires is unlikely to delay the event.

Dozens of Australian firefighters on Tuesday bid farewell to colleague Andrew O'Dwyer, one of three volunteers killed in recent fires.

The 36-year-old father was killed along with colleague Geoffrey Keaton after a burnt tree fell in the path of their firetruck, causing it to roll.

At least 25 people have died in the wildfires.