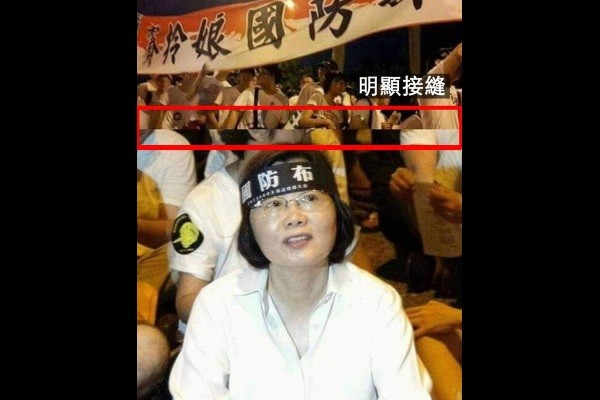 TAIPEI (Taiwan News) — The Taiwan FactCheck Center (實查核中心) has found that a photo of President Tsai Ing-wen (蔡英文) of the Democratic Progressive Party (DPP) that was posted online by a Kuomintang (KMT) candidate has been heavily doctored.

The Facebook post also claimed that Tsai took the lead in the past in opposing the Ministry of National Defense (MND) and humiliating the national army.

On Tuesday morning (Jan. 7), the Taiwan FactCheck Center posted the image on its Facebook page, pointing out that three distinct facts were revealed by an audit of the photo. First, the center said that the image is a combination of two different photos uploaded on the Apple Daily Facebook page on August 3, 2013.

Second, based on Tsai's headband and the stickers worn by demonstrators in the background, the center determined that the lower photo was taken at a protest event on Ketagalan Boulevard on Aug. 3, 2013, by the activist group Citizen 1985 (公民1985行動聯盟). Tsai was among an estimated 250,000 demonstrators who gathered that evening to protest the alleged coverup of the death of Army Specialist Hung Chung-chiu (洪仲丘). Ho Ming-sho (何明修), a professor in the Department of Social Sciences at National Taiwan University, told the center that the march had been sponsored by more than 30 people who met online and had nothing to do with political figures or parties. The protest convinced the Legislative Yuan to implement reforms of Taiwan's military justice system, including the abolition of the court martial during peacetime and transfer of military prisoners to civilian prisons.

The black headbands worn by protesters symbolized their dissatisfaction with the handling of the early stages of the case by the MND and military prosecutors. The photo spliced on top had been taken of a group of protesters not associated with Tsai at a different location.

Third, Wang Hsi (王希), the rally's sponsor, told the center that the goal of the event was to change military trial law from the perspective of judicial transparency and call on the government to investigate the truth behind the Hung Chung-chiu case and other instances of military injustice. Wang pointed out that only political figures who had assisted in the case were invited to speak at the event, while Tsai, the former DPP chairperson, was not invited to the stage.

The Taiwan FactCheck Center concluded that in addition to the fact that the image had clearly been altered, the rumor that Tsai had taken the lead in opposing the MND was not true. It added that the purpose of the activity was not to humiliate the nation's armed forces and destroy its image but rather to fight for human rights within the military.

After coming under fire for spreading a rumor, Yeh on Monday (Jan. 6) took down the photo. She admitted that she had posted the photo with the intention of "satirizing" Tsai but acknowledged that it was "indeed inappropriate for an individual to upload composite photos without verification, and I apologize to everyone here."