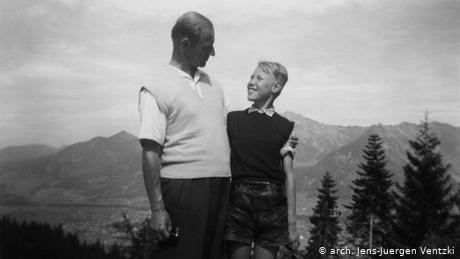 When Jens-Jürgen Ventzki visited an exhibition in Frankfurt about the Lodz ghetto in 1990, it changed his life. And forced him to confront his family's dark past.

Bookkeeper Walter Genewein had taken photographs of people working in the ghetto, many of whom were still children.

At the exhibition, Jens-Jürgen discovered a facsimile of a letter from the National Socialist German Workers' Party (NSDAP) addressed to his father, Werner Ventzki, who at the time served as the mayor of Lodz, or Litzmannstadt, as the Nazis called it. The letter concerns the "used clothing that will become available after the Jewish operation." Mayor Ventzki made a note to himself to discuss the matter with his subordinate, Hans Biebow, the ghetto commander. One week after receiving the letter, Werner Ventzki wrote back to the Nazi party that the "lice-infested" garments had been disinfected and would be handed over to the Winter Relief Fund.

"It slowly dawned on me that my father had not only known about the extermination of Jews, but actively participated in it too," says Jens-Jürgen Ventzki.

Nazi Germany's armed forces, the Wehrmacht, conquered the Polish city of Lodz on September 8, 1939, just one week after invading the country. On Adolf Hitler's orders, Lodz was renamed Litzmannstadt. It became part of the Reich District (Reichsgau) Wartheland, under the control of Arthur Greiser.

Jakub Parol, a historian at the city's Museum of the Independence Traditions, says "Greiser wanted to turn Wartheland into a perfect Nazi district and Lodz into a German town." This is why Greiser recommended 35-year-old Werner Ventzki become the city's mayor. Ventzki, a Hitler loyalist, had joined the NSDAP as early as 1931. He had a reputation for being a skilled orator. After the war, he even boasted that he could enthrall large crowds at public rallies.

Werner Ventzki's son, Jens-Jürgen, says his father was "mainly driven by the idea of turning Lodz into a German city." This, according to Jakub Parol, in practice meant "subjugating the Polish population and killing Jews."

By the end of 1939, the Nazis occupiers began resettling locals and bringing in Germans. Some 40,000 Germans moved to Lodz and many Poles were moved out of the city. Those who remained were forced to settle in less desirable neighborhoods and made to work. The Nazis deemed anyone 14 years old and above fit for forced labor.

At the same time, the Nazis imposed a range of restrictions on the local Polish population. They were only permitted to go shopping at certain times and banned outright from purchasing specific products. The Nazis prohibited locals from driving cars and only allowed commuters to ride bikes. Poles were also banned from boarding the first railroad car on city trains.

The German occupiers forced most churches to close. Poles were no longer permitted to go to the theater, cinema or museums, or to own record players and musical instruments. The Nazi occupiers deemed Poles an inferior race, derogatorily labeling them "Untermenschen," German for "subhumans."

Read more: The Nazi archives: Where Germany's dark past is stored on paper

Jews ranked even lower in the Nazi race hierarchy. In February 1940, the Nazis built a ghetto for them. Two months later, 160,000 Jews had been forced to move into the Lodz ghetto, which was just 4 square kilometers (1.5 square miles) in size.

There, they were forced to produce goods for their captors from the "master race." Leon Weintraub, who was just 14 years old at the time, was made to work in a metal factory. Weintraub, who today lives in Sweden, recalls how he was forced to "work for 12 hours, with only one break to eat a thin soup." He says he constantly thought about if he would even make it home afterward.

Natan Grossmann was made to work in the same factory as Weintraub. He was just 15 at the time. Grossmann's father had been murdered, and his older brother gassed to death at Chelmno extermination camp. He remembers coming home from work and telling his mother he was hungry. She always gave him her food. And, he says, she starved to death in his arms.

Forced to hand over their children

In September 1942, the Nazis demanded that 20,000 ghetto inmates be deported. They called on Chaim Rumkowski, whom they had appointed as the head of the Jewish Council of Elders at Lodz ghetto, to draw up a list of "unproductive" Jews — by which the German occupiers meant children below the age of 10, the old and frail. Forced to comply with the order, Rumkowski urged families to hand over their children and imposed a curfew.

Weintraub remembers how "policemen surrounded the houses, going from apartment to apartment to get the old, sick and young." He says they were unscrupulous, merciless, pulling babies out of their mothers' arms. "After a few days, the ghetto population had dropped by a third," says Weintraub. Those who were deported were sent to Chelmno extermination camp and gassed to death. Leon Weintraub and Natan Grossmann survived.

On the other side of the ghetto wall, Jens-Jürgen Ventzki was born on March 13, 1944. The Ventzki family resided in a villa; they had a cook and a housekeeper.

As a child, Jens-Jürgen always heard his parents refer to the town by its Nazi name of Litzmannstadt, never as Lodz. Mayor Werner Ventzki was fascinated by the idea of Germanifying the city. He sought to live his family life according to Nazi principles, too.

He was supported in this by Jens-Jürgen's mother Erna-Maria, who had joined the NSDAP in 1932 and was a former commander in the League of German Girls, the girls' wing of the party. After the war, she dialed down any discussions of the past and claimed that she "had not known" what had happened.

But how plausible is this? And how much responsibility did Werner Ventzki carry for the crimes perpetrated in Nazi-occupied Lodz? His son Jens-Jürgen is certain that "he was aware of and took part in the extermination of Jews."

A letter from March 1942 proves this. While on holiday, Werner Ventzki penned a letter to his deputy, Mayor Marder, stating that: "It will soon transpire whether the Jews of the German Reich who are unable to work will remain ... or be include in the 'operation.' I personally think the latter will be the case, so that would take care of the matter."

Tears well up in Jens-Jürgen Ventzki's eyes as he reads these lines. "Here it is in black and white: acquiescence in murder." According to Jens-Jürgen, his father was a staunch Nazi, who in his letter uses the term "operation" to refer the gassing of Jews and sees genocide as "taking care of the matter."

Yet this very man was at the same time a caring and at times goofy father, says Jens-Jürgen. He finds it hard to reconcile these two sides: "I have two fathers: a loving one, whom I remember from my childhood; and a war criminal." This reality is something that Jens-Jürgen must learn to deal with, he says.

Peter Klein, a professor at Touro College Berlin, explains that "not only the Sicherheitspolizei (Nazi Germany's security police: ed.) but also the civil administration played a role in running the ghetto." But the Germany judiciary never considered it as bearing responsibility for the murder of Jews and others, says Klein. He is certain that if Lodz Mayor Werner Ventzki had been put on trial in Poland, he would have been sentenced to death.

Indeed, Lodz ghetto commander Hans Biebow, wrote a letter in 1947 stating "I was not in charge of the ghetto, I merely took care of employment matters and the food situation on behalf of the mayor."

Lodz mayor Werner Ventzki never faced justice. While the Hanover public persecutors' office did launch an investigation into his conduct in 1961, it closed the case after just a few months. Ventzki was free to continue his career as a civil servant in post-war West Germany.

For the rest of his life, Werner Ventzki never made a secret of his Nazi beliefs. He even complained that he was described as "merely a hanger-on" during Germany's Denazification phase. At a family gathering, he reportedly boasted of having met Hitler twice at the Reich Chancellery. He apparently was also proud of having sat next to Hitler during a lunch.

"Stories like these repulsed us," says Jens-Jürgen, who never, however, confronted his father over his past. But, he says, nowadays there is no need because "I have documents that speak for themselves."

These days, Jens-Jürgen is a regular guest at synagogues and goes to schools and universities to speak about his father. He has many Jewish friends, like Natan Grossmann. He says reconciliation between the two is not possible because that is a different level. But, he adds, "I can take responsibility for what happened and talk about it."

Jens-Jürgen's father never shed his Nazi beliefs. In 2002, at the age of 96 and two years before his death, he still stressed that he was an "anti-communist, anti-democrat and anti-Semite."

This article is part of the Guilt without Atonement project by DW's Polish desk in cooperation with Interia and Wirtualna Polska.